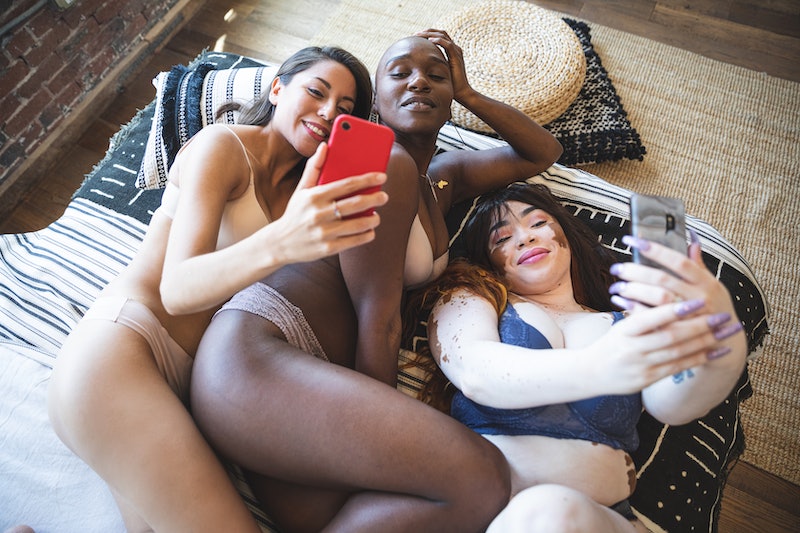 With the rise of ethical non-monogamy (ENM), more TV shows and movies are portraying open relationships. Whether they’re swingers, navigating the idea of introducing new partners into their relationship, or trying threesomes for the first time, many of these depictions show the more potentially chaotic and messy side of open relationships. Take Conversations With Friends for example — no one actually seemed thrilled about the arrangement and plenty of drama ensued. While you’ve seen some of these chaotic examples in entertainment, you might even be surprised at just how common — and desirable — non-monogamous relationships have become off-screen.

According to a 2016 study published in the Journal of Sex and Marital Therapy, nearly 22% of 9,000 adults surveyed said they had previously been in a consensually non-monogamous relationship — meaning over one in five adults have had experience in some form of an open relationship. More recently, many young adults report being interested in open relationship dynamics. In a 2020 poll of over 1,300 U.S adults by YouGovAmerica, 43% of millennials reported that their ideal relationship style was non-monogamy.

Because there isn’t one single definition or structure of an open relationship, it can be difficult to nail down exactly what it is. Below, experts give their input on what an open relationship can look like, and how to know if it might be right for you.

Like most partnerships, couples in an open relationship have varying dynamics. Non-monogamy educator and content creator Chad Spangler, who goes by @polyamfam on Instagram, says there are a significant number of ways people can choose to go about it, so it’s easier to keep its definition vague. “My definition of an open relationship is the ability to have intimacy outside of your existing intimate relationships,” he tells Bustle.

There are a plethora of ways in which partners can choose to structure their open relationships, but generally speaking, some experts have an overarching idea of what they typically entail. Open relationships can most often be explained as a relationship in which a couple “consents to external sex, but doesn't consent to external romantic love or commitment,” says polyamory mentor and content creator Morgan K., who goes by @chillpolyamory on Instagram. “It can look like casual hookups or one-night stands, or having a consistent friend-with-benefits. There's also open [or closed] swinging, where each person attends play parties and has casual sex, with or without their primary partner.”

Sexual activity in an open relationship doesn’t have to be kept separate either, according to licensed clinical social worker Laura J. Brito. For example, couples can engage in threesomes with a third person. “All three may participate or perhaps one of the partners watches,” Brito tells Bustle. “Partners can also connect sexually with others without the other partner's involvement, such as each creating profiles on Tinder and selecting a partner for the evening.”

The main element that distinguishes open relationships from other styles is the focus on sexual connections, rather than emotional or romantic ones. If you’re curious about whether an open relationship is a good option for you, it’s important to understand what sets them apart from other forms of non-monogamy.

When it comes to drawing a line between open relationships and more defined styles like polyamory, things can get a little tricky. “There is so much overlap,” Spangler says, adding that open relationships tend to rely more on a hierarchy, meaning that there is a “primary” or main partner who gets more rank than the external partners. But, that’s not always the case. “There are plenty of polyamorous folks who practice relationship hierarchies, and there are plenty of people in open relationships who are looking for more than sex,” he says. In terms of hierarchy, it’s common for couples to “open” their relationship to other sexual partners, but with the understanding that their original relationship comes first. Of course, as Spangler explains, there are exceptions to that commonality.

Polyamory can be considered a form of an open relationship, but with some key distinctions, especially when it comes to levels of commitment, Brito says. “Polyamory is a little more proximal in that partners agree to have romantic relationships with one or more additional partners that can be longer in duration,” Brito says. “Polyamory may also include partners being more integrated into other areas of your life such as attending important events or sharing household responsibilities.” This distinction is significant because some types of polyamorous structures include a “kitchen table” dynamic, where two or more partners in the polycule — aka the group of people connected by relationships of their own or those of their partners — live in the same household and share related responsibilities.

The existence of romantic or emotional connections is one clear way to delineate open relationships from other options under the ENM umbrella. In terms of polyamory specifically, Morgan explains that poly people don’t limit themselves to one connection, but that “there can be tailored agreements to how other relationships get structured, and how time or resources get allotted.” In an open relationship agreement, many couples don’t permit outside romantic connections.

Although there isn’t one “right” way to practice open relationships, the success of any relationship style always comes down to communication. Without talking through any hierarchical needs, boundaries, or comfort levels with your partner(s), you run the risk of someone getting seriously hurt. “Find a middle ground between ‘go with the flow’ and a list of rigid rules,” says Spangler. “Don’t establish so many rules that dating you becomes a confusing puzzle, but also don’t go too far into ‘whatever happens happens’ territory and neglect important communication with partners. The sweet spot is somewhere in between.”

For Spangler, a “do’” is to set boundaries for comfort when necessary. Some important “don’ts” involve not letting your insecurities lead your decision-making when it comes to the boundaries in your agreement, and not implementing a “veto” to gain control over your partner by granting or revoking permission for them to form sexual connections with others.

If your relationship is on the rocks, then trying an open relationship to “fix” it or “spice things up” is not wise, says Brito. Instead, Brito recommends that you make sure your relationship is in a really solid place and that healthy and open communication is already a regular practice between every partner involved.

Preparation is never a bad idea, either. According to Morgan, setting both you and your partner(s) up for success in an open relationship means doing your research and seeking wisdom from sources with expertise, like people with long-term experience in non-monogamy. She also recommends preparing yourself emotionally for the more difficult issues that may arise. “Do anticipate fear, jealousy, anxiety, and trauma responses in the beginning,” she says. “It's common to both consent and struggle in the beginning because this is one of the most vulnerable things you can do.” For many partnerships, open relationships can work well with time, effort, and honesty. “As long as everyone is acting in good faith, not crossing boundaries, not withholding or deceptive, then stability is possible.”

More like this
7 Women Share Their Best Orgasm Stories
By Lexi Inks
Are Quality Time & Physical Touch Love Languages Compatible?
By Lexi Inks
Is It A Rebound Relationship Or The Real Thing?
By Carolyn Steber and Lexi Inks
Expert Tips For Being On Top When You're Plus-Size
By Lexi Inks
Get Even More From Bustle — Sign Up For The Newsletter