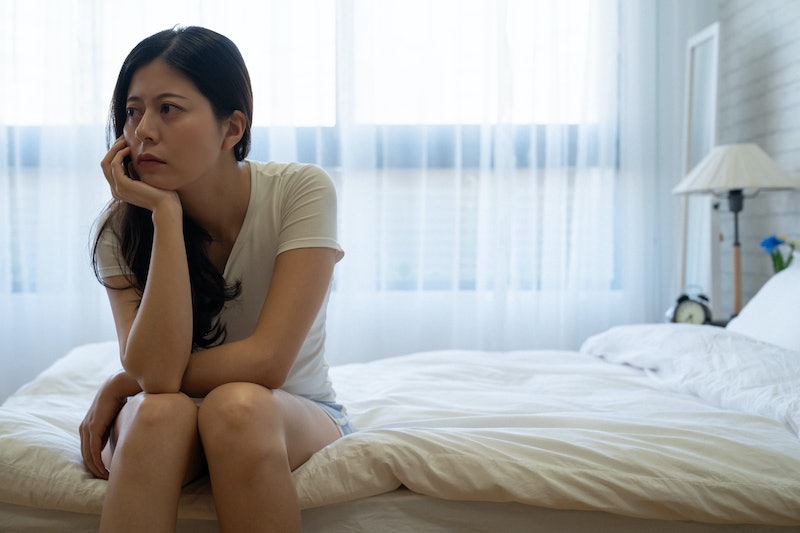 In this week's Sex IDK column, Emma McGowan, certified sex educator and writer, answers your questions about how to tell when you're ovulating and what time of the month sex can lead to pregnancy.

Q: If I have sex in the middle of the month, will I get pregnant?

Do you know what I find really interesting? Sex education in the United States often focuses on “reproduction” (sperm, egg, etc.). And yet, somehow, fertility basics for people with uteruses tend to be missing. Instead, we’re usually told "If you have sex any time ever you will get pregnant and also probably your genitals will off from STDs."

Although I disagree with this approach, I can understand why school sex educators take it. The goal of those programs (if not the educators themselves) is often not to educate kids about sex but to keep them from having it at all costs. (Fun fact: According to the Guttmacher Institute, only 17 states require that sex ed be medically accurate, while 29 states require that "abstinence be stressed.") And despite evidence that this tactic doesn’t keep young people from having sex, many programs think the "Scared Straight" approach is still the way to go.

All of that is to say: You’re not alone in asking this question, Reader. And while so many sex ed programs don’t give young people this information because they’re scared it will make them want to have sex (or something), I’m of the opinion that the best way to educate is to give people the information that they need to make good choices for their selves.

So, here’s the information: If you have a uterus and you’re not taking hormonal birth control (as in the pill, the patch, the implant, the ring, or the shot), and you don’t have a hormonal IUD, then your body has a reproductive cycle. That means that you’re only fertile during certain parts of your cycle — and not during others.

The changes in your body during your reproductive cycle are based on the rise and fall of primarily two hormones: estrogen and progesterone. At the beginning of the month, estrogen rises until you ovluate mid-month. After ovulation, estrogen dips back down and progesterone rises. I’m going to lay out what happens during those hormonal shifts for a 28-day cycle, which is the typical length, but yours might be 27 or 29 or 32. If you’re relying on this information to help you figure out birth control, it’s important to track your own cycle on a calendar or in an app for a few months to get an idea of how long it is.

The reproductive cycle (or “month” — which, in this case, doesn’t mean like, December or April but instead the month that your cycle lasts) starts the minute you get your period. That’s Day 1. And from Day 1 to Day 7, as your estrogen starts to rise, you’re not fertile. That’s because you haven’t ovulated yet, which I’ll get to in a minute. From Day 7 to Day 14, you still haven’t ovulated, but if you have sex during this part of the month it's still possible to get pregnant. That’s because sperm can live inside the vagina and uterus for up to five days — and we give the fertile period a full seven days because it can be hard to gauge exactly when ovulation happens. (Better safe than sorry.)

During that week — Day 7 to Day 14 — you’ll want to use protection if you’re not trying to get pregnant. The best contraceptive method is an IUD, both because it’s “set it and forget it” (meaning once you have it inserted, you don’t have to do anything else) and because it’s over 99% effective at preventing pregnancy. But if you don’t want to get an IUD, barrier methods like condoms and diaphragms are great during this fertile week.

Around Day 14, your body releases certain hormones that tell your ovaries to release an egg. That’s ovulation. The egg then floats around a little bit until it’s sucked by a fallopian tube, which carries it down into the uterus. It’s during this time — which is about 24 hours — that you actually get pregnant if there’s sperm present. And remember, sperm can live up to six days in your body. So, if you have sex without any kind of protection in that week leading up to ovulation, it’s possible to get pregnant. You an also reach out to your health care provider if you want more information on how to best track your cycle.

And the two weeks following ovulation, as your estrogen drops further and progesterone rises, you're not fertile anymore. That's because the egg has already been released and is no longer viable. Your body is getting ready to flush it out — along with your uterine lining — in your next period.

Long story short: If you have sex in the week leading up to the middle of your cycle (or the third week, for a 28-day cycle), you could get pregnant. (Of course, mileage will vary: Everyone's body and fertility is a little bit different.) So, if your cycle is irregular (like sometimes 33 days, sometimes 28, occasionally 24) and you’re really trying not to get pregnant, go for a super reliable form of birth control instead of trying to track your cycle. Your un-impregnated future self will thank you.

More like this
TikTok's Voluntary Celibacy Trend Has Sparked A Movement
By Lexi Inks
My Partner Wants Me To Wear A Diaper During Sex. Help!
By Sophia Benoit
12 Active Date Ideas That'll Get You & Your Boo Outside
By Lexi Inks
18 Hinge Prompt Answers To Try If You’re Looking For Something Casual
By Lexi Inks
Get Even More From Bustle — Sign Up For The Newsletter
From hair trends to relationship advice, our daily newsletter has everything you need to sound like a person who’s on TikTok, even if you aren’t.