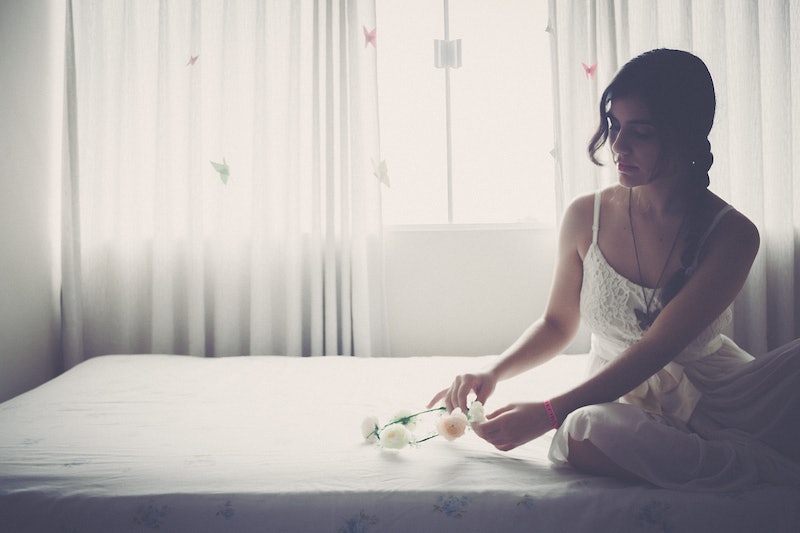 Just as most of us avoid thinking about how our celebrity crush has definitely had explosive diarrhea at one point[ or another], we also tend to be in denial about all the less sexy stuff our vaginas can do. Periods are becoming less and less taboo, but there's plenty of other crazy stuff that our nether regions force us to deal with. And so right here, right now, we're going to sit down and get comfortable with words like "discharge" and "queef" and stop pretending like they don't happen to even the prettiest of vaginas.

Because everyone's vagina is different, it's completely normal to wonder if the stuff going on down below is just a "you" thing or a "literally every woman on Earth" thing. But have no fear—even though you're unlikely to discuss this stuff during girls' night out, it doesn't mean that your vagina is weird. Check out these less-than-glamorous vagina moments that we've all experienced at some point or another, and rest assured that your vagina is perfect just the way it is.

Sometimes, it's because your period decided to drop by unannounced. Other times, it's because you saw Chris Hemsworth's abs and biology took over. Either way, there's something fairly unsettling about realizing that your genitals are spending the day at the water park (or, you know, discharge park, but that sounds like a lot less fun) when you just wanted to get through your workday in peace. If it makes you feel any better, the stuff that lubricates your vagina, known as squaline, is also found in shark livers. So you and the coolest creature of the sea have something in common!

I have zero desire to hear complaints about itchy balls from anyone who has never experienced the torture that is an itchy vagina. Maybe it's caused by a yeast infection, or maybe your pH is just a little off, but either way, "itchy vaj" is the official antonym of "fun."

Technically this has more to do with your labia and less to do with your actual vagina, but it's still worth talking about. Camel toe is one thing, but a crotch wedgie is a whole 'nother level of having fabric overstepping its boundaries. Back-end wedgies are tolerable, and some of us even opt to don underwear that is literally designed to go up our buttcracks. But crotch wedgies are uncomfortable and unfortunate clothing mishaps that no one should ever be subjected to.

4. It Leaves Surprises In Your Underwear

Vaginas are like the Wonder Balls for women — you never know what's going to come out. Sometimes, you get normal whiteish fluid, other times you get a clear glob of stretchy mucus-y ickiness, and there are even times it looks like an extra-gory crime scene took place in your nether regions. If you have abnormally colored discharge, you should seek medical attention. But if everything seems A-OK, it's best to just admire all the crazy things your vagina likes to surprise you with.

We've talked before about how queefing is an awkward, but pretty much uncontrollable side effect of having a penis pushing air into your cooter canal. However, it doesn't just happen during sex. Air can escape from your vagina at some pretty strange times, like while you're doing yoga or even while you're just stretching. It's such an odd sensation, and whether it's as loud as a trumpet or just a gentle vagina whisper, you never really get used to it.

By now, you've probably learned that your vagina can do some pretty amazing stuff, such as pushing new humans out of your body and making attractive people fall in love with you. One woman named Tatyana Kozhevnikova even pushed hers to the extreme and ifted 31 pounds with her vagina alone! Really, though, the true strength of the average vaj is most impressive when you're not even trying to make it show off its stuff. Only a truly awe-inspiring body part can push out a tampon when you're actually just trying to push out a stubborn poop from a completely different body part. Do enough kegels and your vagina will be ready to take on anything that's thrust its way.

At least, I like to tell myself that they're irrational, because I don't want to live in a world where I can accidentally push in a new tampon without taking the old one out first. Most men and women protect their private parts as though they were a newborn kitten, but vaginas do so much stuff that when one of those things doesn't go exactly according to plan, it's easy for panic mode to set in and think a little extra discharge one day means you have an STI or that darker menstrual blood means you're dying of Toxic Shock Syndrome.

All of your common sense and knowledge about basic female biology tends to go out the window when something is slightly suspicious down below.

There are two types of women in the world: those who have had a fart travel up through their labia and exit out the front, and dirty stinkin' liars. It's a literal fart bubble that makes its way out of your bum, gets lost on the way out, and decides to do a bit of exploring in the neighboring areas. Usually, it's able to get out just fine after taking the scenic route, but sometimes, it decides to stay a while until it grows up and emerges from the vagina as a full-fledged queef.