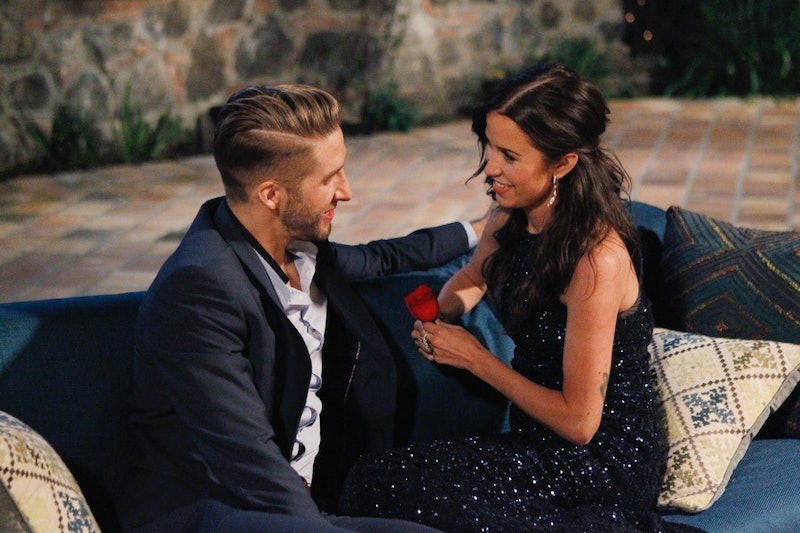 ICYMI, Kaitlyn Bristowe chose Shawn Booth over Nick Viall on the jaw-dropping season finale of The Bachelorette. Although my heart sank with second-hand rejection feels while watching Nick begin to launch into his proposal speech before Kaitlyn tearfully let him know her heart "is with someone else," it was made clearer to me than one of the series' many wine glasses that my favorite Bachelorette made the right choice by offering now-fiancée, Shawn, the final rose. From their shared adulation for one another, to their squee-worthy cuteness during post-finale appearances, and just the fact that the two went through quite the trial to get to exclusivity, this is one reality television couple I'd be willing to wager many bets is in it for the long haul. The only thing I feel remised about following this addictive franchise's most recent finale is that these two lovebirds will no longer be gracing my screen every Sunday [*insert sad-faced emoji here*].

But wait! What if these two decided to sign on for a spinoff? I, for one, would cancel plans just to tune into that show every week — wouldn't you? Kaitlyn and Shawn have already proven that they can come out on the other side of reality television with their romance unscathed, so taking another go at displaying their chemistry for the cameras (and their man fans) would seem like the next logical step in their relationship — amiright?? In case you doubt me, I have come up with a list of reasons that we need a Kaitlyn/Shawn spinoff ASAP. Enjoy!

1. They Might Be The Most Entertaining Bachelorette Couple Of All Time

From the moment Shawn stepped out of the limo and announced he was "here for Kaitlyn," we could tell that the two were ripe for some exceptional Bachelorette moments. Shawn's relationship with Kaitlyn remained pretty much front and center — albeit, peppered with some contention with Nick — throughout the season, making their relationship one of the most entertaining and dramatic in the show's history.

2. Their Tweets To One Another Are Too Cute To Bear

Now that Shawn has been revealed as Kaitlyn's fiancée, we can all enjoy stalking their respective tweets to keep up on the adorable banter between the two. Seeing this banter in a full-on spinoff would be much nicer, though...

Remember when Shawn dressed up in that ridiculous golf outfit at Kaitlyn's request? AHAHAHAHAHA — I need more of that in my life.

4. I Still Need A Notebook-style Speech From Shawn In My Life

As Ryan Gosling's lookalike, I feel it is only appropriate that someone captures Shawn offering Kaitlyn a full "I want all of you, forever, you and me, everyday" Notebook speech for all the world to see. He got very close to this speech during Bachelorette, but no cigar.

5. They Can Handle National Exposure

These two have been able to carry themselves through a hit reality series, post-finale appearances, and even leaked Snapchats. Obviously, they don't mind the exposure, so a spin-off would just be par for the course.

6. They Took A Sacred Oath To Stay Together

These two took a pledge to never break up on a stack of entertainment magazines, y'all! There should be nary a concern that a spinoff would shake the couple's relationship.

7. Free Passes To All The Wedding Planning, Ceremony & Reception

Sure, ABC could simply air Kaitlyn and Shawn's wedding as a one or two-night special. But what about the planning, the showers, and the bachelor/bachelorette parties? As one who enjoys living vicariously through celebrities and public figures (I'm an Entertainment Writer — HELLO!), I'm aching for a front row seat to all the action.

I think I've made my point. Let's wish on all the first impression roses imaginable that this spinoff will come to fruition.