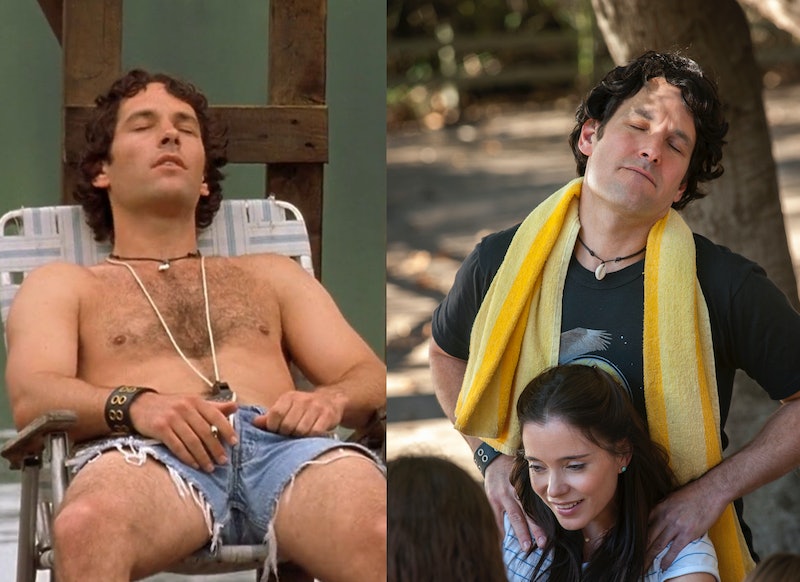 Half the fun of watching Wet Hot American Summer: First Day of Camp on Netflix is noting how the appearances of the plethora of actors who returned to Camp Firewood after 14 years have changed since 2001, when the original film was released. Or in one case, how they haven't changed, since the prequel series essentially proves that Paul Rudd never ages. First Day of Camp shows that there's no other explanation to Rudd's continued youthfulness other than that the actor must have a portrait of himself in his attic that is aging, while he maintains his great looks and hairline for over 20 years.

The lovable actor has a diverse list of film credits from over the years — from the romantic with Clueless, to the quirky with Wet Hot American Summer, to the action-packed with Ant-Man. Regardless if he is in a small indie project or a huge comedic franchise, Rudd can do no wrong — and he looks so damn good doing it.

With Rudd showing off his enduring looks in Wet Hot American Summer: First Day of Camp, it's time to embark on a 20-year photo journey of Rudd's film and TV roles to see if he really hasn't aged since 1995.

Clueless was Rudd's first big movie break and he made fans of the Jane Austen-inspired film swoon with his angsty and thoughtful Josh.

Although most preteens were too busy swooning over Leonardo DiCaprio, there existed a core group of young, astute viewers who knew not to overlook Juliet's other suitor, Dave Paris.

This Vince Vaughn-starring film wasn't well-received, but even with his shorter hair and glasses, Rudd's boyish charm was still intact.

The Object of My Affection was Rudd's first film collaboration with Jennifer Aniston, but it wasn't surprising when Rudd joined his fellow ageless costar again for 2012's Wanderlust.

Tobey Maguire and Rudd competed for Charlize Theron's love in the film based off the John Irving novel.

In the TV movie-version of the F. Scott Fitzgerald novel, Rudd yet again shared something with Maguire since he played Nick Carraway — just like Maguire did in Baz Luhrmann's version of the story in 2013.

In the original movie, Rudd's Andy stopped liking Elizabeth Banks' Lindsay because she tasted like a burger. Though their make-out sessions aren't on display, the pair of Rudd and Banks are the MVPs of eternal beauty in Wet Hot American Summer: First Day of Camp.

Rudd joined Aniston again on her TV show Friends, but this time he was the love interest of Lisa Kudrow's Phoebe from Season 9 until the beloved series ended in 2004.

The premise of this Neil LaBute film that was adapted from his own play (which Rudd also starred in) is that Rachel Weisz's Evelyn transforms Rudd's Adam from a sloppy student to the adorable Rudd fans are used to.

Anchorman: The Legend of Ron Burgundy (2004)

Rudd returned to his comedic roots as Brian Fantana in Anchorman — and even his muttonchops and mustache couldn't age him.

Although Rudd's character was trying to give advice to Steve Carrell's Andy, Rudd was perhaps at his most slovenly for this Judd Apatow romp.

In a smaller-than-normal role, Rudd played the threatening father-figure opposite Ben Stiller and was back to his clean-cut looks.

Even though Rudd defies age, Apatow felt comfortable casting him opposite his own wife, Leslie Mann, for one of my favorite film couples, Pete and Debbie, in Knocked Up.

Rudd often plays opposite his leading ladies more than once, like he did with Banks in Role Models. Just look at those beautiful, crazy kids!

For some unknown reason, the affable Rudd struggled to find male friends in I Love You, Man as he prepared to marry Rashida Jones. Luckily, Jason Segel came to the rescue for one of the cutest bromances of cinematic history.

Carrell and Rudd paired up for a third time (after Anchorman and The 40-Year-Old Virgin) for Dinner for Schmucks and although this isn't one of Rudd's stronger films (and he was kind of a jerk in it), the man still looked good.

While Rudd got hairier for his role of the titular idiot brother, it didn't stop two of his repeat leading ladies (Banks and Jones) from working with him again. And hey, I'll take Rudd scruffy or clean-shaven!

Knocked Up's Pete and Debbie returned for This Is 40 — and somehow looked better than they did five years previously.

With the 1970s behind him, Brian Fantana embraced the '80s. And even with dated ensembles (complete with gold chains and chest hair), Rudd didn't look much older for the sequel that came out nine years after the original film.

A film that is a must-see for all die-hard Wet Hot American Summer fans, Rudd teamed up with the creators of Wet Hot — David Wain and Michael Showalter — and fellow alum and Parks and Recreation collaborator Amy Poehler for this rom-com that allowed Rudd to parody the more traditional leading male roles he has been known to take on. But with timeless looks like his, it's no wonder Rudd has been a viable rom-com lead for years.

One of the built-in jokes of First Day of Camp is that it's a prequel that makes no effort to hide the fact that the actors have aged since the original film in 2001. In the case of Rudd, however, there's not really anything to hide.

I'm expecting more big things from Rudd in the next 20 years.

*Note: The years used are the release dates of the movies or TV shows, not when they were filmed.