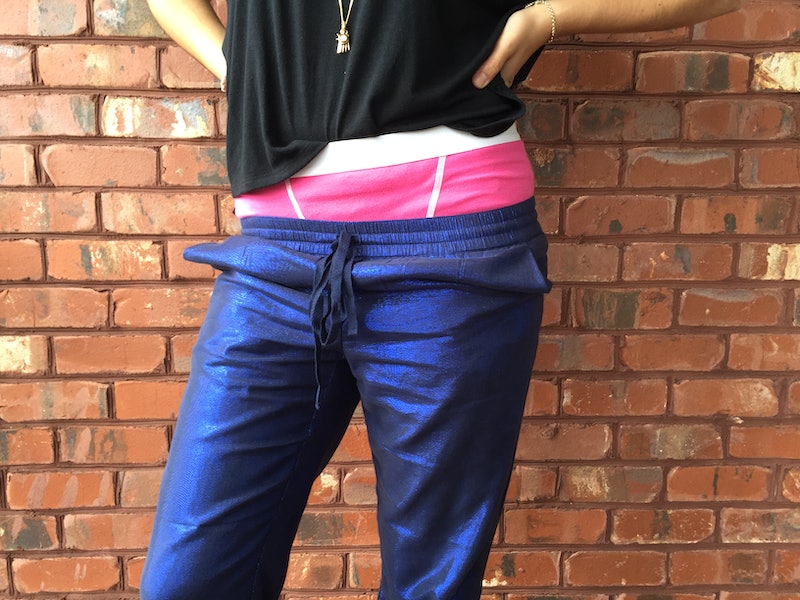 As someone who has worn and loved almost every kind of underwear made for women, I am very straightforward when it comes to my opinions on panties, bras, and lingerie in general. Naturally, the thought of delving into the world of men’s underwear has always excited me, but I never really had the chance to take the plunge. With my curiosity piqued as of late, I decided to go where I had never gone before: Wearing men’s underwear for one week.

What if, instead of reaching for a clean thong after a shower, I simply reached for a pair of boxers instead? How would wearing undergarments so associated with the opposite sex impact my own body image or sense of comfort or ability to feel sexy? Would I fall in love with boxer briefs altogether, ditching my arsenal of lace and opting instead to break the gender binary in the world of intimate wear? I just had to find out.

While it may not seem like it, however, I had my hesitations. But without making any changes to my day-to-day schedule, and simply avoiding my stash of women’s panties and reaching for their male counterparts, I was able to discover quite a few interesting, surprising, and occasionally disappointing things about men's knickers.

There are very many different types of women’s underwear out there. Honestly, there are probably too many different types of women’s underwear. Briefs, boy shorts, thongs, low rise bikinis, high rise bikinis, G-strings: The list can go on forever. But in terms of men’s undergarments, there are really only three prime choices. (And no, a banana hammock is unfortunately not one of them.) But I wasn’t just going to go off my 21 years of experience. So I did what any Millennial person would do and asked the men of social media what their underwear routine is like.

My friend McCord tells me in a direct message via Twitter:

“Some guys need room to breathe, but I just got a pair of tight shorts that are perfect for hiking. Like, boxers have a lot of room, but are thus not good for running or anything like that. I usually go with boxer briefs or something of that nature.”

One win for boxer briefs! My friend Danny adds:

“Boxer briefs are simply more comfortable. They hold everything in place, they seem to last longer, and they don’t come with all these weird graphics like boxers do. And I’m not a kid, you know? They’re very soft and stay in place making them easier to wear.”

My S.O. Jay really puts boxer briefs ahead of the others, telling me:

“They’re nice because they give me the support of a brief but the comfort of a boxer. Plus, they come in different designs and shapes so it doesn’t necessarily have be as tight as a brief or as loose as a boxer."

With my newfound knowledge in mind, I began my experiment with none other than a pair of boxer briefs.

Out of sheer anxiety, the day I began the experiment I wore my regular ole’ women’s underpants under my men’s boxer briefs. In retrospect, this wasn’t a particularly bright idea. In the moment, having had doubts about the security of men's underwear, I was thinking of comfort. But I quickly realized that wearing two underwear under my sparkly pants wasn’t necessarily the best thing to ever happen to me.

The boxer briefs fit and hugged me well, but their bands around the legs were too tight and I pulled on them all day. Plus, the waist part was so high that every time I reached up you could see my boxer briefs peeking out from above my pants. Therefore, my trousers hung out much lower than my crotch all day because the waistband couldn’t, well, find my waist. Sighs.

On day two, I was a lazy bones and didn't really change into clothes, simply wearing a pair of men's boxer briefs around the house, leaving only to go the gym. Since my pink boxer briefs were peeking out from below my workout shorts, I resorted to wearing a pair of bike shorts to hide them. Let's just say: Working out with three layers of clothing on your bottom isn't the best idea either.

The boxer briefs were bunching up around the crotch and giving me really uncomfortable wedgies. Once I got home, I had major camel toe and blushed at the sight of it underneath my gym-wear. What a pleasant surprise.

Day three was when I finally got enough courage to try out a real boxer. As you can see, I very carefully chose my outfit. I wore a skirt to avoid the boxers bunching up under my clothes, which was especially important since I wanted to keep my experiment as incognito as possible at work. Additionally, I had to roll up the fabric around the waistband to keep them from peeking out under my skirt. Besides that, the boxers were quite comfortable.

My high opinion of them only grew when I got home, took off my skirt, and just hung out. Easily as comfortable as my pajama shorts, these boxer shorts were the perfect way to unwind from a long day at work and just relax with a cup of wine. Ahh.

On day four, the story was quite similar because I tried out regular briefs. And boy do I have a lot to say about briefs, guys.

They honestly feel just like women's briefs but really, really big. Imagine you're wearing a pair of granny panties that are three sizes too large: That's what wearing a men's brief feels like. Day four went smoothly, as I wore the underwear under a pair of sweat shorts. I barely noticed them on my body all day, and was only reminded that I was wearing a pair of men's briefs when I went to the bathroom. Towards the end of the day, however, the thickness of the brief was rubbing up against my skin way too much.

While my first day with boxers was great, I think I was giving them too easy of a day. Wearing a skirt with any kind of underwear is easy because the skirt is usually looser and flows more than other pieces of clothing. On day five, however, I just went for it, slipping on a pair of boxers and then my black skinny jeans.

Every time I went to the bathroom, I had to rearrange my boxers into my pants. Their band would peek out above my jeans, even though I was in high-waisted denim. Since I was in a rather professional setting at work, I had to be very careful about pushing my boxers back into my pants and avoiding leaning over.

Going shopping afterwards probably wasn't a good plan either. Again, I suffered from a lumpy butt in everything that I tried on. I hate a lumpy but.

So Was That Worth It?

As much as I enjoyed being able to experience the "masculine" world of undergarments, it's not exactly something I would do again. Like I said before, underwear is a personal subject, and one that individuals have every right to feel differently and uniquely about. For me, it all boiled down to comfort. I like feeling as smooth as possible under my clothing, which none of these men's undies could do for me.

There were a few shining moments, of course — like the ease of a full-on boxer short when you're just chilling around the house with your bottle of Moscato. But in future, I'm going to reach for my traditional panties as I always have before. Maybe it's because of my reproductive organs. Maybe it's because I don't like to show off my underwear. Or maybe it's because I'm boring. But frankly, the choice to stick to classic women's panties is all mine.

I might keep those boxers around, though. You know, just in case.