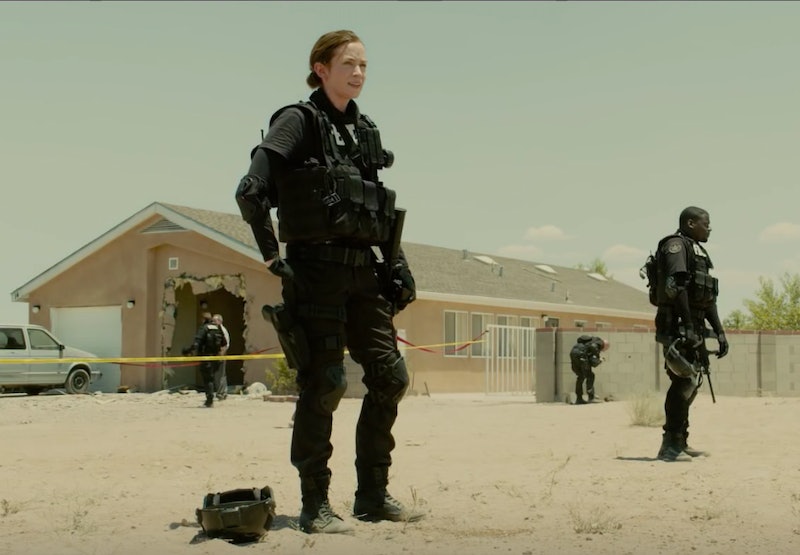 Emily Blunt is one cool lady. She's played Queen Victoria in The Young Victoria, Miss Piggy's receptionist in The Muppets, and a hardcore, futuristic soldier in Edge of Tomorrow, among other great parts. It's no secret Blunt could probably kick your ass in a fight, and look good doing it, something she's more than willing to prove in her new film Sicario. In Sicario, Blunt plays Kate Macer, an FBI agent who is brought onto an elite task force that works on the U.S.-Mexico border, and might just operate on the wrong side of the law. Throughout the film, Macer is seen as a capable, strong, and active agent, so the role no doubt required a lot of physicality from the actress. But did Emily Blunt do her own stunts in Sicario ? What exactly Blunt did and did not do for the film is unclear, but it's obvious that the star went through extensive training to play the tough FBI agent.

To play Macer in Sicario, Blunt had to learn how to handle various weapons — mostly guns. Though Blunt had worked with them on set before, she recently revealed that she is not a fan of them. "I don't enjoy working with guns very much. I went to a gun range and found the whole thing quite frightening. But you kind of have to get in the zone and get in the pocket...So I trained with local FBI and DEA law enforcement guys," Blunt said in an interview with E! News.

Blunt's training came in handy on set, where many of the extras were former Navy Seals, or former law enforcement. Having such hardcore professionals on set also helped Blunt get in the mindset of an agent, something she felt was vital to the role.

"What they do to decompress was interesting to me, because I think it is a lifestyle that you have to be prepared for. And it is a lifestyle that's really challenging, and one that is emotionally hard to detatch from. So, I asked this one FBI chick, 'Oh, how do you decompress?' She said, 'I watch Downton Abbey.'" Blunt told E! News.

Blunt is no stranger to stunts. She famously got her feet wet in the action genre starring alongside Tom Cruise in Edge of Tomorrow . Cruise, of course, is known for his daredevil approach to stunts, and helped provide Blunt with a crash course in stunt work. "I was thrown into the deep end of action. Anything else is like a baby paddling pool," the actress told EW.

That said, Sicario required a very different brand of action from Blunt — less flash, more grit. It was important for Blunt that Macer wasn't a larger-than-life action hero, like Cruise in Mission Impossible. She wanted Macer to feel real. For example, at one point, Blunt threw herself into a messy fight scene with actor Jon Bernthal, sacrificing relatively safe fight choreography for a more realistic brawl.

"It was very, very physical, that fight. I remember, because I said to the stunt guy, 'let's make it messy, it's gotta look real, it's gotta look desperate,' because she isn't actually an action heroine, this character, she's a female cop and the reality is she would be overpowered by a guy that size, that, that is the reality. She hasn't got the perfect thing to say, or she can knock out any guy. She's not that girl. It has to be desperate, like she's fighting for her life. And so, with that comes a sort of messiness and a lack of choreography, so you're met with a lot of bruises and soreness the next day," Blunt told Indiewire.

Just because Blunt is willing to get physical for her roles doesn't meant she's jumping onto the action-only bandwagon, though. In fact, the actress hesitates to call herself an action star. She did reveal, however, that she is proud to be one of the many actresses getting big action roles on-screen, telling Variety, "I'm happy to contribute to the new wave of these very kick ass roles for women. I think it's become less of an anomaly to have women in these parts, which is fantastic. ...But we still need more women in these types of roles. We are just beginning and I am happy to contribute."

I think I speak for womenkind when I say, we are more than happy to accept her contribution.