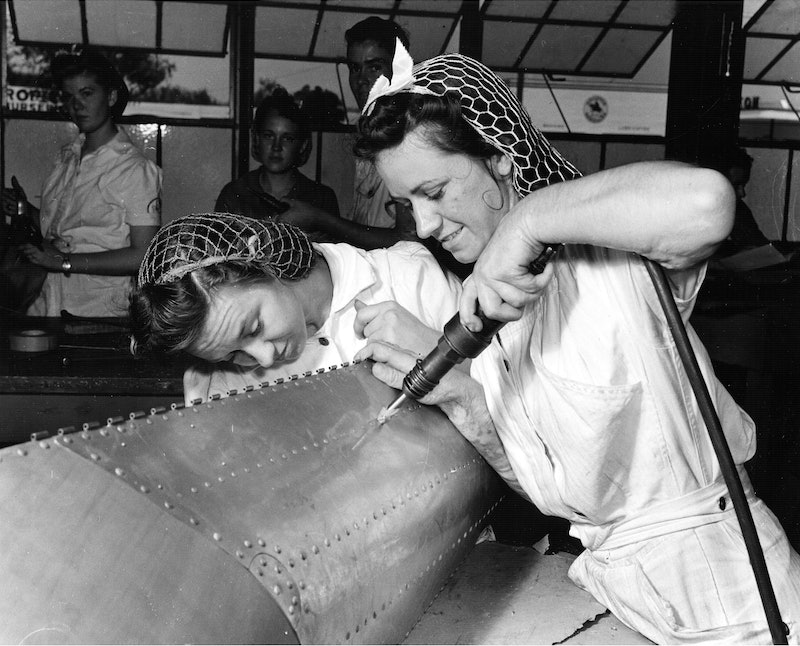 If you're anything like me, then you probably don't need anyone to tell you why you should be proud to be a woman — but I'm going to anyway. Of course, I won't deny that being a woman comes with its own set of drawbacks — primarily because our society as a whole has yet to embrace the total equality of the sexes, but also because I don't think any of us who get menstrual cramps really love having them. But if you do identify as female, don't let the constant negative and sexist messages that we hear on the daily get you down —you really should know that there are all sorts of facts about females that will definitely make you feel proud to be a woman.

Though you wouldn't necessarily know it from reading the history books, which often marginalize women's cultural contributions, women have been responsible for creating some of humanity's greatest works of literature and ruling entire nations long before gender equality had progressed to where it is now. Plus, our bodies are capable of all sorts of awesome things, like having like 13 different types of orgasms.

So if you need a refresher course in everything that's cool about being female, or just some new reasons to feel awesome, check out these five facts that will make you proud to be a woman.

1. Everyone Starts Off Female

Have you ever wondered why guys have nipples? Well, it's because we all start off as female in utero. When embryos first begin developing inside a woman's womb, they follow what LiveScience calls a "female blueprint." It isn't until around the 60 day mark that those embryos with a Y chromosome start to go through the testosterone-fueled cellular changes to their genitals and brain that make them male.

2. Some Of History's Most Impressive Figures Were Women

Queen Elizabeth I, Queen Victoria, Cleopatra and Joan of Arc are just a few examples of the amazing women from our world's history who have earned global respect for how they governed and inspired people. But what's even more impressive about these female rulers is the fact that they earned worldwide respect at a time when women were even more disadvantaged than they are today.

Now, if only we could just add a female U.S. Commander-In-Chief to the list...

Despite what some people think, women have always worked. Women played valuable roles in the pre-Industrial market economy by laboring on family farms. Women were also important to the Industrial Revolution, often moving far from home and taking dangerous and low-paying jobs in order to support their families or live independently without familial support.

About 350,000 women served in the U.S. Armed Forces during World War II (both domestically and abroad). And as you may already know, even women who didn't join the military started joining the workforce in record numbers between the years of 1940 and 1945 to fill gaps left in the American labor force by male enlistment. The percentage of working women jumped from 27 percent to 37 percent during these years, and more married women started working outside of their homes than ever before. However, even though female labor was essential to U.S. involvement in WWII, women were rarely paid more than 50 percent of what their male coworkers were earning at the time.

Currently, women are still working their butts off in spite of the wage gap. Around 57 percent of the U.S. workforce is female, and 70 percent of women in the workforce also have children under 18 at home, as well. (Which basically means they're never not working.)

4. Some Of The Most Acclaimed & Popular Books Ever Were Written By Women

Whether you're a fan of the classics or not, I don't think it's possible to ignore the contributions female authors have made to the Western cannon. Mary Shelley invented science fiction when she wrote Frankenstein at the age of 19. The three Bronte sisters — Charlotte, Emily, and Anne — changed literature with their ground-breaking novels like Jane Eyre and Wuthering Heights. Emily Dickinson remains one of the most influential American poets of all time, as do Maya Angelou and Sylvia Plath. Toni Morrison has won the Nobel Prize for Literature as well as the Pulitzer Prize. It's almost impossible to read anything that these women have written without feeling proud to be a woman — and these women are just the tip of the literary iceberg.

5. More Women Are Graduating From College Than Ever Before

Of course, not everyone chooses to go to college or is able to attend even if they want to go — but of the people who are able to attend college, more of them are women than ever before. And more women are graduating from college now than at any other point in history — today, women in the workforce are more likely to have a bachelor's degree than not, and 21 percent more likely than their male peers to have completed college.

Earning a college degree is no joke, and the fact that more women are graduating from college than ever before (especially when there are still corners of the planet where women risk physical harm to attend school) definitely makes me feel proud to be a woman — and it should make you feel proud, too.

More like this
Sandra Bullock, Girlboss Extraordinaire
By Matt Harkins & Viviana Olen
Here's Your Daily Horoscope For May 25, 2022
By Mecca Woods
All The Astrological Events Happening In June
By Nina Kahn
What Does “Gatekeeping” Mean On TikTok? The Viral Term, Explained.
By Courtney Young
Get Even More From Bustle — Sign Up For The Newsletter