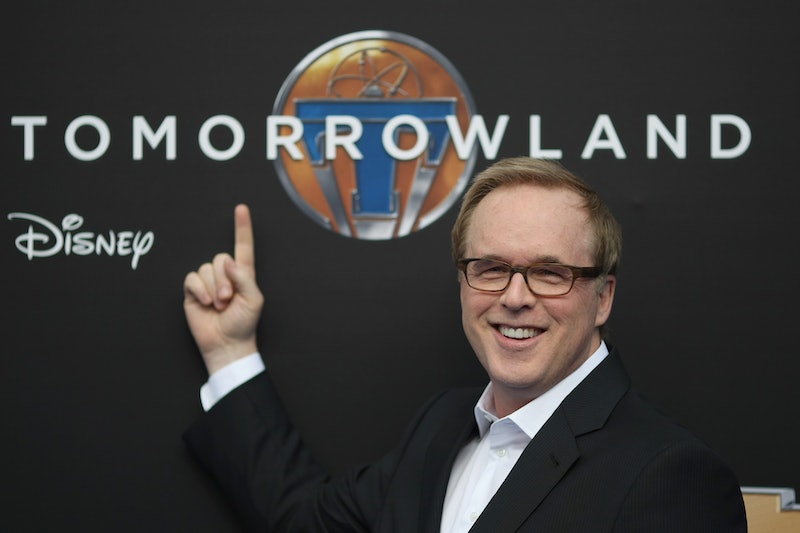 At the Television Critics Association press tour this August, FX president John Landgraf coined a new term that has since permeated the pop culture lexicon faster than any in recent memory: "Peak TV." Whether he meant to or not, Landgraf found the perfect way to describe the current state of television, with its glut of original programming, its burgeoning viewing options, and its ever-expanding definitions. "My sense is that 2015 or 2016 will represent peak TV in America and that we’ll begin to see decline coming the year after that and beyond," Landgraf forewarned. What's interesting about this phenomenon is the effect it's having on movies, as Tomorrowland director Brad Bird pointed out. In a recent interview with Entertainment Weekly, Bird discusses the difference between movies and TV — and how there often isn't one.

"Movies are becoming more like television, and television is becoming more like movies," Bird told EW. "Television is taking the risks, and movies are settling in to Your Favorite Weekly Program." It's hard to argue with his sentiment when HBO's Game Of Thrones — arguably the very dictionary definition of "cinematic" television — just came off its most successful season yet, awards- and ratings-wise while eight of the 10 highest-grossing movies of the year so far have been franchise entries.

In an era where major Hollywood studios seem increasingly hesitant when it comes to non-franchise material, an original movie like Tomorrowland not performing quite to expecations can then be used as evidence against green-lighting more original work in the future. It's in this environment of "peak TV" and gun-shy film studios that the line between television and movies is beginning to blur.

"In a lot of cinemas, they don’t even bother putting up the number anymore," Bird laments. "When Harry Potter was coming out, they’d just put Harry Potter on the cinema every two years. Whatever the name of the franchise is, they don’t even bother to delineate that it’s the latest episode. It’s like it’s this week’s episode of a long-running TV show." He goes on to clarify, "Many of my favorite movies are sequels. But I do worry when it’s taking up more than 50 percent of the big-budget bandwidth, the collective bandwidth of Hollywood, it starts to worry me because it means nothing new is getting introduced into the ecosystem. That’s not healthy for the long-term view of film. Every studio should, like an allowance, allow themselves a certain number of franchise things, and then as an investment in the future, try these risky things that are unproven. At one time, Star Wars was a risky venture."

For his part, Bird is hopeful that Tomorrowland will gain a following over time. "People right now can’t believe that 2001 was an object of ridicule by a lot of people," he reminds us. "Wizard of Oz wasn’t a hit until the late ’50s, y’know? My favorite Disney animated feature, Pinocchio — which is, adjusted for inflation, one of the most successful movies ever made — was a flop on its original release. So I’m proud of the movie we made." Ironically enough, Bird is now hard at work at a sequel of his own — only the second of his career, after Ghost Protocol. Bird and Pixar have finally re-teamed for the highly-anticipated The Incredibles 2 , coming next year.

If there's one last filmmaker to pin our hopes on, it's Christopher Nolan. Ever since he rose to fame with 2005's Batman Begins, the director has managed to balance his obligations to one of the biggest franchises in history with stunningly original and personal works like The Prestige, Inception, and Interstellar. "I didn’t want the studio to be rapped on the nose for doing something original, and then given extra big treats and an air-conditioned suite for repeating old ideas," explained Bird about his feelings post-Tomorrowland. "That seemed to be kind of what happened this summer. I can just say that I hope Christopher Nolan comes up with another Inception, an original idea that rewards the risk-takers."

More like this
Sadly, 'Fantastic Beasts: The Secrets Of Dumbledore' Isn’t Streaming — Yet
By Arya Roshanian
The 'Hocus Pocus' Sequel Finally Has A Release Date & It Makes Total Sense
By Shannon Barbour and Radhika Menon
9 Honestly Unbelievable Revelations From The WAGatha Christie Trial
By Frances Stewart
10 Eurovision Moments That Celebrate The Weird & Wonderful Camp Extravaganza
By Sam Ramsden
Get Even More From Bustle — Sign Up For The Newsletter