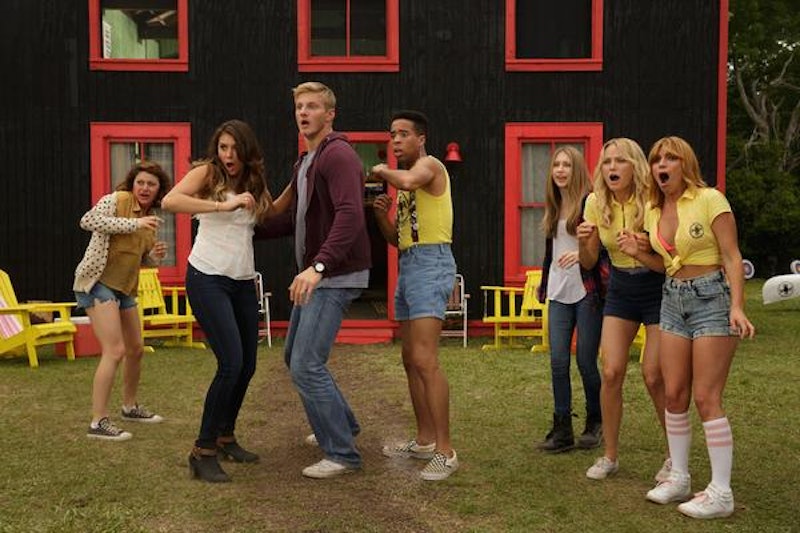 The Final Girls is not your average slasher flick. For one thing, the main characters — Max (Taissa Farmiga), Vicki (Nina Dobrev), Gertie (Alia Shawkat), Chris (Alexander Ludwig) and Duncan (Thomas Middleditch) — aren't actually from the world of the killer — they don't even exist in the same universe. Unfortunately for them, this group of friends finds themselves sucked into the world of an '80s slasher movie, Camp Bloodbath, where they become choice victims for the film's evil killer. If you're wondering if Camp Bloodbath is a real movie, the answer (luckily) is no — but in The Final Girls, it is is a classic horror film, one that Max and Duncan know by heart. After all, the movie stars Max's mother (Malin Akerman), and they spent much of the movie sucked into its plot.

Despite being "made" in the '80s, the version of Camp Bloodbath inhabited in The Final Girls is obviously not from that era. For one thing, it stars Akerman and Adam DeVine — both very much stars in the current decade. Though Camp Bloodbath might resemble a whole subgenre full of horror movies, the movie never really existed. It is, however, heavily inspired by the slasher films of decades past. The movie-within-a-movie features a mysterious killer, hell-bent on killing all the young, sexually active inhabitants of Camp Blue Finch, embracing the horror trope of the "final girl." For those of you who don't know, in the horror genre, the "final girl" is the lone survivor (or one of the main survivors) of the villain's attacks, an innocent, yet strong female — preferably a virgin. It is this trope that The Final Girls puts a smart, entertaining spin on.

The Final Girls isn't the only horror film to use slasher tropes to their advantage, though. Here are a few other movies that succeeded in turning tropes on their heads.

Shaun Of The Dead

Shaun of the Dead, written by Simon Pegg and Edgar Wright, embraces the zombie genre — the title is obviously a play on Dawn of the Dead — while also making it hilarious. Instead of dark and gritty, Shaun of the Dead is vivid and full of laughter.

The Cabin In The Woods

Cabin in the Woods, written by Drew Goddard and Joss Whedon, would not exist without horror movie tropes. It literally depends on a plot made up entirely of horror movie cliches. The inventive movie has a stellar cast, including Chris Hemsworth, Fran Kranz and Whedon staple Amy Acker, and manages to pay homage to the horror genre while also poking a little fun at it.

Wes Craven's 1996 classic, Scream , is largely credited with re-defining modern horror. The scary movie, penned by The Vampire Diaries' Kevin Williamson, is about a group of movie-obsessed teens who are stalked and killed one by one. Yes, the film follows old horror tropes — the "final girl" being one of them — but it also put a new spin on old stories by giving the "final girl," played by Neve Campbell, a strong character.

It's too soon to tell where The Final Girls (out Oct. 9) ranks among these films, but with a title like that, it's hard to believe it won't be an instant classic.