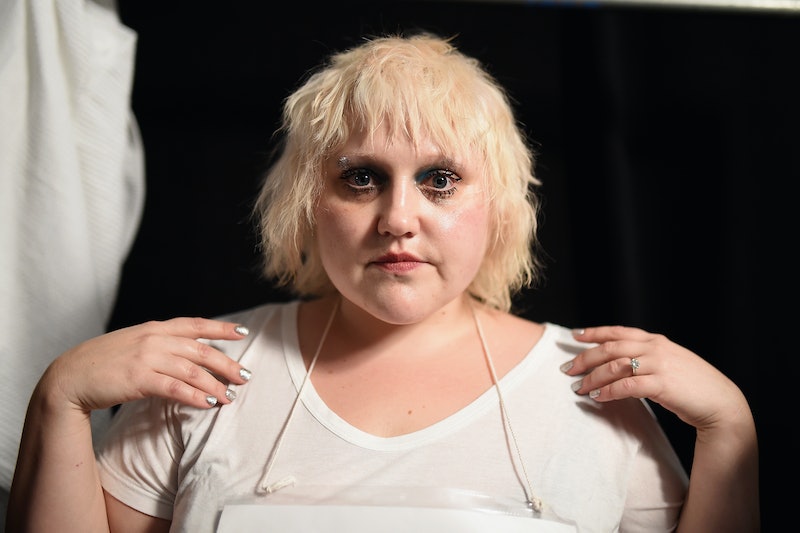 By now, most of us have seen Demi Lovato's nude shoot for Vanity Fair — photos in which Lovato appears beautiful, vulnerable, and above all brave. Despite a long personal history of addiction and eating disorders, which could cause anyone to feel not-so-comfortable in their own skin, Lovato has taken it upon herself to actively heal through body positivity. Posing nude for one of the biggest publications in the world is definitely a part of that.

According to Vanity Fair, Lovato agreed to the shoot under the conditions that there would be no makeup or photo retouching. In a world where women and feminine individuals are regularly made to feel insecure about their natural bodies, this is a decision that should be celebrated.

Of course, women posing nude for covers and spreads for magazines can easily be considered an act of exploitation or hyper-sexualization. At times, this might be true. However, body pos role models like Demi Lovato, Laverne Cox, and Beth Ditto are posing nude not to exploit their own sexualities or invite the male gaze to gather 'round. Their photos are a commitment to loving themselves, and being comfortable enough with their nude bodies to celebrate them.

Nude body positive photoshoots can be about taking ownership and power over your own body and sexuality, and defining these things in ways that are most comfortable to you. Above all, though, they can be about showing the huge audiences of these publications that every body is beautiful, helping gain visibility for queer/trans bodies, fat bodies, people of color, differently-abled bodies, and pregnant bodies of all ages and sexualities.

Here are just seven of the most body pos nude magazine photo shoots to date.

Cox looks like a queen in Allure's 2015 Nude Issue, completely open and vulnerable with skin that is literally glistening. This was a very brave and important move meant to gain visibility for trans people of color.

"Trans women certainly are not told we're beautiful," Cox said to Allure. "Seeing a black transgender woman embracing and loving everything about herself might be inspiring to some other folks. There's beauty in the things we think are imperfect. That sounds very cliché, but it's true."

Miley Cyrus covered Paper Magazine's Summer Music issue whilst totally nude, filthy, and embracing a pig. Not only was her breaking down of beauty norms for the shoot refreshing (since she discussed her gender identity in the interview accompanying the photos), but she demonstrated total agency over and comfort with her body. So much so that she's adorning her nipples and groin with pink paste and decorations. Rad.

In an incredibly inspiring photoshoot for Cosmo, Hannah Foxley showed that you can still love your body and be beautiful when you've had parts of that body removed. According to The Daily Mail, Foxley had a mastectomy after a three year long, off and on battle with cancer. She maintains her body positivity despite the difficulty of losing something that some see as being key to your femininity.

For Flaunt's Sept. 2015 issue, Beyoncé posed nude (and covered in sparkles) and unsurprisingly looked amazing. She embraced her beautiful curves and only reaffirmed her place as a queen of feminine confidence and empowerment.

Musician Beth Ditto looked gorgeous on the cover of the first issue of Love Magazine. Three cheers for plus size visibility and her beautiful tattoos.

In Aug. 1991, Demi Moore posed nude while pregnant and undoubtedly made expecting people the world over feel beautiful in their nakedness.

At 56, Madonna posed (basically) topless for Interview Magazine's Dec. 2014 issue. The resulting photos were gorgeous, and serve as a reminder that feminine bodies are beautiful at every age.

There is still a lot more progress to be made — considering there are hardly any high profile nude photo shoots involving disabled people, for example. Over the years, though, publications have slowly been coming around to the idea that body positivity belongs to everyone. And that's a pretty special thing.