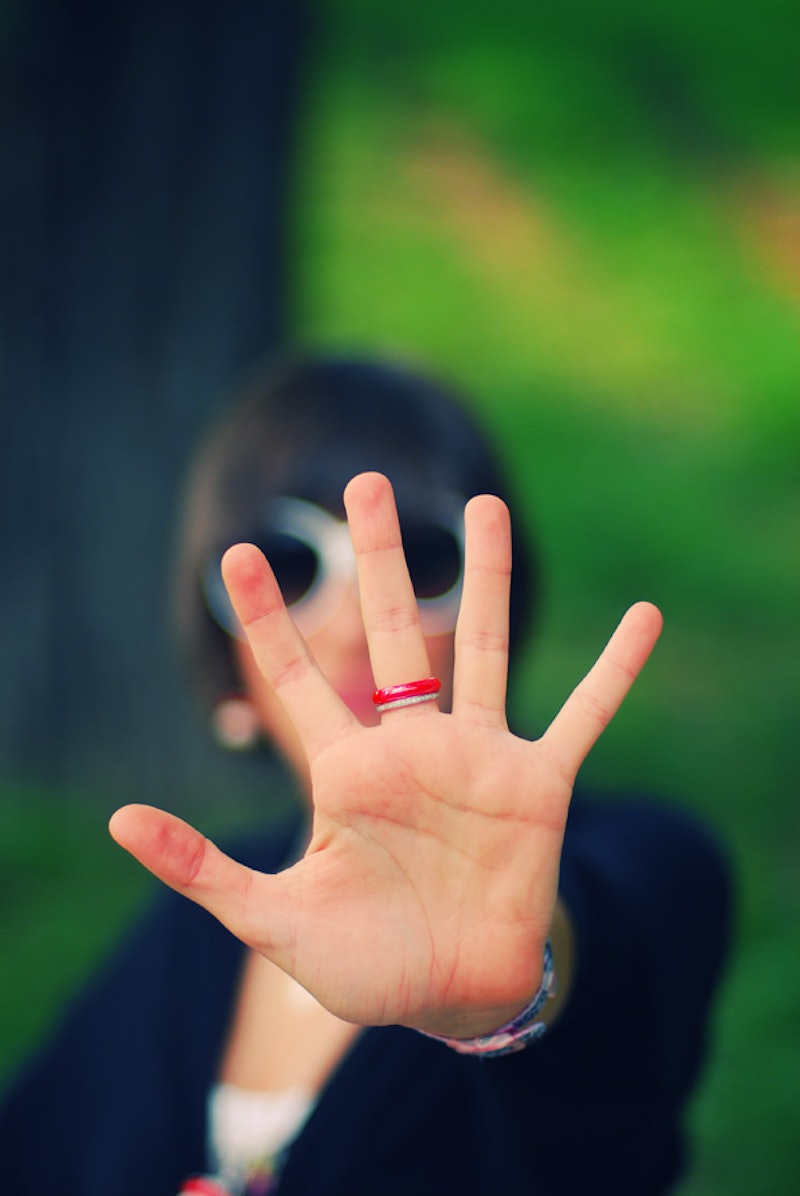 You're half an hour into dinner with that cute person you met on OKCupid, and things seem to be going smoothly — until suddenly, something surprisingly misogynistic slips out of their mouth. What do you do? Shutting down sexism on a date can be awkward, since many people like to avoid conflict with someone they barely know. And it can also be awkward to leave, especially if your entrees haven't even been served yet.

In these situations, I usually just smile and nod and change the subject (and then don't text them back afterward), because a debate about the merits of feminism with someone I've just met for the first time is not always worth my energy. However, occasionally, I either have enough faith that my date will entertain my rebuttal or simply can't keep quiet because my blood is boiling — and that's when these tactics come out from under my sleeve.

Maybe, your date is being unknowingly sexist, and calling them out will actually lead to a fruitful discussion and possibly even an apology. Or maybe, they just have very different values from you. If you're not sure which case you're dealing with, you'll at least learn how compatible you are by addressing their sexism head-on. Here are a few suggestions for calling out seven different types of sexism.

1. If: They Make Gender-Based Generalizations...

For example, some people might use dates as opportunities to express sexist assumptions like "women aren't funny," "women are bad drivers," or "men are less compassionate."

Women aren't funny? What about Margaret Cho? Men are less compassionate? What about the Dalai Lama (though his beliefs have recently left something to be desired) on the one hand, or all the violent women throughout history on the other? It only takes one exception to disprove a rule, and there are usually plenty.

2. If: They Argue That Gender Roles Are Biological...

You've heard these: Men are better at math, women are more emotional, etc., all because science! Or... something. These generalizations pigeonhole people of all genders, and there are a lot of good reasons to doubt them.

If someone wants to talk about science, two can play that game. There's a lot of science suggesting that gender is socially constructed. One study, for example, found that the gender gap in the mental rotation task (which people often use as proof that men naturally have better spatial reasoning and therefore better mathematic abilities) evaporated when subjects were told to picture themselves as stereotypical men. Another study found that men understated the emotional reactions that they physiologically revealed while watching sentimental videos.

Most people who openly identify as feminists have at some point encountered common arguments against feminism like "feminism is sexist against men" or "feminism is unnecessary."

Try: ...Explaining What Feminism Is And Why It's Necessary

There's a lot of debate out there about what feminism is and isn't, but at the most basic level, feminism means gender equality. Hearing how simple feminism really is can lead people who are afraid to call themselves feminists to change their minds. Even though people should really know these things by now, you can also explain the wage gap, women's underrepresentation in world governments, and the prevalence of sexual assault toward women and gender-nonconforming people as some of the simplest pieces of evidence that feminism is necessary.

4. If: They Try To Do Things For You That You Can Do Yourself...

I personally think it's nice when someone offers to pay for a date or opens a door for me; sometimes, though, the chivalry gets a bit out of control, like when someone orders a meal for me or plans the date without my input.

Try: ...Doing Something For Them, As Well

Whether you find someone's gestures helpful or patronizing, doing each other favors can be a two-way street. If someone opens the car door for you, unlock their door for them. If someone buys you dinner, buy them dessert. These gestures will show that you appreciate their efforts to help without viewing them as gendered.

5. If: They Say Something That Objectifies Or Degrades Women...

This could include anything from commenting on a female public figure's looks or talking about women as conquests (which would be doubly inappropriate on a date!) to saying that victims of sexual assault or harassment are asking for it or complaining about "nice guys" who don't get the women they deserve.

Try: ...Asking How They Would Feel If Someone Said That About Them

Telling someone to put themselves in the shoes of the person they're degrading could help them see why their words are inappropriate and do not constitute a compliment.

6. If: They Make A Gender-Based Assumption About You...

Stereotypes can lead people to talk about their dates as if they already know who they are. For example, a date once asked me how I pictured my wedding when I was little, when I had never even thought about that.

Try: ...Explaining How It Really Is

If your date hears about how you were more interested in dinosaurs or sports than weddings as a child, they'll know that at least one person doesn't fit the stereotype and may think twice about stereotyping you or anyone else in the future.

7. If: You Do Not Feel Like Addressing Someone's Sexism...

Correcting someone else's behavior can feel like babysitting, so if you'd rather just move on and enjoy your meal, I hear you.

You're not responsible for eradicating all the sexism you encounter. You also don't have to see any date, sexist or not, again if you don't want to. Maybe the affront was minor enough that you can overlook it, but if your date says something clearly sexist and doesn't apologize for it, for me, I'd say another date is not in order. That's OK! There are plenty of people out there who take sexism seriously, so don't be afraid to hit your mental "next" button and talk about the weather in the meantime.