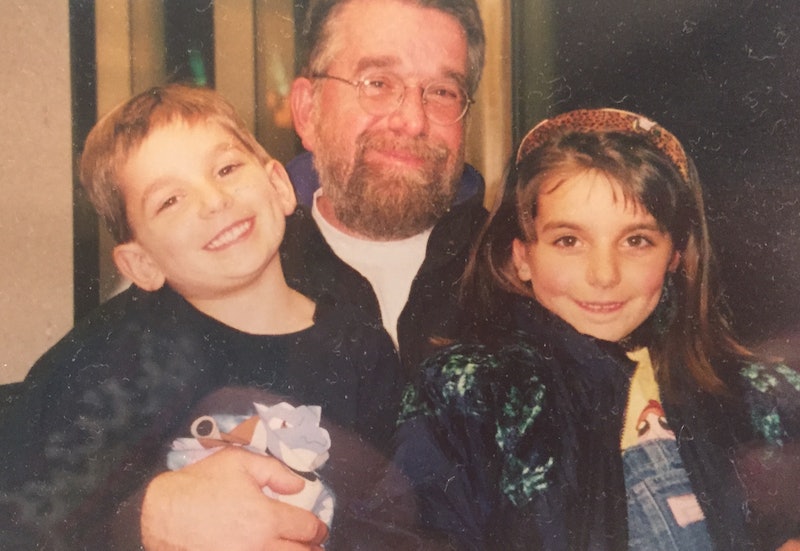 I'll be honest: When I asked my dad if he was a feminist, I wasn’t actually sure what he’d say. Somehow, in my 22 years of existence as a woman, the issue had never arisen. I was raised alongside my brother and we were treated as equals. He played dress-up and I played baseball. Don't get me wrong — I collected Barbies until I was in high school — but I don't recall ever feeling any gender-related pressures. It wasn’t until I was exposed to the universe of college that I began reporting home with the weekly feminist digest.

I feel like most people have a pretty clear conception of their parents’ political views — it’s usually how you learn about politics in the first place. Yet, in many ways, my dad is an enigma. He’s a quiet, pensive man who avoids conflict at all costs — and politics are definitely included in this category. He never discouraged my highly politicized views, but he was never one to get involved himself.

Ironically — or perhaps coincidentally — he came of age in the 1950s and '60s. It was a time when women were actively oppressed and, simultaneously, actively fighting for their rights. In his lifetime, he’s witnessed Rosa Parks, Gloria Steinem, and Hillary Clinton. He's seen the landscape of civil and social rights transform itself repeatedly, although whether there has been much, if any, resolve is still up for debate.

I emailed my dad one afternoon, telling him I was writing an article about feminism that required his input. He e-mailed me back, setting up a time to talk the next day. "I have some thoughts," he wrote. Thoughts? I pondered that word for the next 24 hours — it could mean literally anything.

A sign commemorating the Darr Mine Disaster. My dad grew up in the blue-collar coal mining town of Van Meter, where many men worked in the Darr Mine, including my grandfather.

When we spoke the next day, I spent the first 10 or so minutes of the conversation beating around the proverbial bush — asking about the dog, chatting about the weather — anything to avoid a potentially cringeworthy conversation. Finally, it was he who broached the subject.

"Right, right," I said, as though I had totally forgotten. Meanwhile, in my hand was a sweaty notebook filled with questions that seemed like they'd be more appropriate for Lena Dunham.

“When do you think you first realized women are at a disadvantage to men?” I asked him. This is usually a powerful question for women, who are often forced to "realize their place” at a very young age. Yet, I found myself nervous to approach this topic with my father. Discussions of gender politics can so quickly turn ugly after an incorrect wording or uncomfortable insinuation.

My dad answered the question truthfully, admitting he was naive about the level of repression women faced for a long time. He recalls several jobs he had in the '80s where women were clearly more qualified to be in charge of certain teams or projects, but were forced to accept lesser roles. There were a few consulting jobs where women were working below him, when he could tell they should be managing him. Otherwise, he recalls women as being active and involved members of his school and work communities.

Yet, it wasn't until mass media exploded in the '90s and early '00s did he fully comprehend the levels of discrimination. My dad wasn't able to put his finger on why exactly this era triggered such a realization, but a glance at the cultural landscape reveals quite a bit: The sudden omnipresence of the Internet and the rapid increase of consumable media put the exploitation of women front and center. Of course, women had been the target of sexist media campaigns for years, but now, there was no avoiding it.

I was five years old when the Monica Lewinsky scandal erupted. The harassment and criticism she faced would be enough to make any father consider how women are portrayed in the media.

Women were more clearly aggressively exploited in advertising, television, and film. Kate Moss was the most famous figure in fashion, promoting a look that became known as "Heroin Chic." Rap music became mainstream and every day there was a new music video premiering that featured a horde of women, objectified and stripped of both their clothing and their agency. Monica Lewinsky was referred to "nutty and slutty" by the media. Meanwhile, access to the internet helped perpetuate these negative conversations. It was the beginning of the era in which we now live: The era of Photoshopping, online harassment, and Donald Trump.

On a personal level, I asked him about the role of women in his own life, and he had what seemed like an infinite amount to say. Of course, my dad is perhaps a unique case in that his entire life has been populated with truly amazing women, beginning with the woman who raised him. His mother, my grandmother, was the strongest woman in the gentlest way.

My father was born in 1946. The Second World War had just ended and society's focus was on the men who now had to re-assimilate into society. My father was raised in a tiny coal-mining town with a population of less than 1,000. Residents homes were four-room duplexes provided by the coal-mining company. It was a humble, blue-collar life.

My grandmother managed the household for her two sons while her husband worked in a coal mine, and my dad was taught to respect their roles as ones of equal importance. Even now, my dad does a meticulous job keeping the house clean and organized and regularly cooks dinner. It’s easy to see where he learned to view these kinds of tasks with the dignity they deserve.

Then there's the matter of his great-grandmother, who ran a boarding house for immigrants in the town where my father grew up. She, too, managed family and household affairs, for her husband could barely speak any English. And there's my mother, too, who drew herself out of the poverty of mid-century Greenpoint and the grief of losing both parents before the age of 15 to build a meaningful career at a children's hospital without the help of a college degree. Even my father's workplace, the Office of Child Development at the University of Pittsburgh, is populated by 90 percent women. He's raised two daughters over the last 40 years and is constantly followed around the house by one tough old broad of a pup.

My dad (well, his legs anyway) and Riley, our 13 year-old terrier who never leaves his side.

"I think people feel threatened by that word," he said. "Men are threatened by women having power and try to justify their own logic for the rules they've set in place to keep women down."

Now, it was finally time for the big question: I asked my dad if he is a feminist, and he thought for a moment before saying, “Yes.”

His logic is that which people often ignore: “I believe in equality regardless of gender, so yeah, I guess I’m a feminist.” It reminded me of that Aziz Ansari bit: “If you believe that men and women have equal rights, if someone asks if you’re feminist, you have to say yes because that is how words work."

Though I've left the proverbial nest, my parents still find new ways to encourage and inspire me — even if it's just listening to me spout my ideologies for a few minutes. I realize not everyone is so fortunate to have that kind of relationship with the people who raised them. When I told a few of my friends that I was planning on talking to my dad about feminism, I received wide eyed stares and statements like, "I could never do that."

Before I interviewed my dad, I had promised myself that his answer wouldn't matter. I know where I stand on these issues, so what difference does it make if he chooses not to hold the same views? It's just a label, right? Yet, when he said that F-word — feminist — I found my heart swelling with pride.