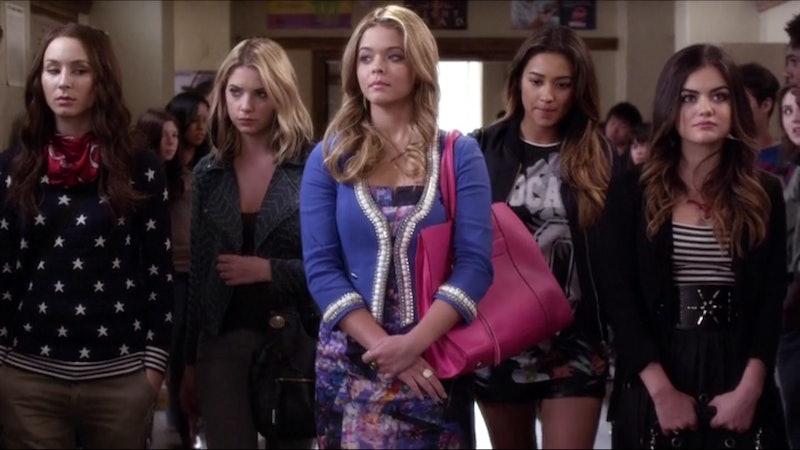 If there's one thing that Pretty Little Liars fans know how to do better than anyone, it's cultivate a good television theory. Pretty Little Liars theorists have worked diligently to uncover Big A's identity, and some even predicted that Cece was both Charles DiLaurentis and the person underneath the black hoodie. But while plenty of the theories that fans come up do end up becoming a part of the Pretty Little Liars universe down the line, there are some PLL theories that are so upsetting that we hope they never, ever come into fruition — even if they are pretty wild.

There are lots of reasons why these fan theories will bum you out. Some of them completely destroy characters that we adore. Others burn beloved ships to the ground, while others make us question whether any of the events of Pretty Little Liars ever actually happened at all. While plenty of these theories sound totally and completely bonkers, let's not forget that there was a point when declaring that Ezra's writing a book about Ali or that Sara is playing Ali in the dollhouse would have also been pretty cray. Anything can happen in Rosewood, and we can't totally discredit any of these theories — as upsetting as they are, they could come true one day.

Here are the fan theories that completely broke our hearts:

1. The Entire Show Is In Aria's Head

This theory was created by fans on the Pretty Little Puppet Masters Facebook page, and it says that no one should trust Aria or what they see onscreen, because in reality, all of the events of PLL are in Aria's head. In this theory, Aria is a patient at Radley who has been working with Ezra to write a book about the "perfect crime" — because she plans on committing one when she gets out of Radley! Not only does theory paint Aria as the ultimate villain, but it also makes Spencer, Emily, and Hanna virtually non-existent. So sad.

Variations of this theory have been floating around the internet for years, but the main point of them is that Aria's ex-boyfriend/teacher Ezra is the ultimate villain of the show, masquerading as a good guy. He may have been writing a book about Ali, but ultimately he did want to hurt her and her friends as an act of revenge for fooling him years ago. The evidence of this? Ezra called Ali his Holly Golightly, which would make him Paul Varjak. It would make Ezra the puppet master holding Cece's strings this entire time.

3. Caleb Could Be Evil

Well, this would be devastating. Some fans speculated that Caleb could be A because he is one of the few people who might have made logical sense. Caleb may be ride-or-die for Hanna and the other girls, but he is also a master hacker, has access to his wealthy mom's money, and knows a whole lot of secrets about the girls. Of course we now know that Cece is A, but when you spell out the facts, Caleb does seem like one of the few people in Rosewood who actually had the A credentials.

4. Toby Really Did Die In The Woods

Body swapping seems to be the norm on Pretty Little Liars, and there is one character that a fan on Facebook suggested may not be who he seems. Remember how Mona faked Toby's death in the woods, leading to Spencer's mental breakdown? Spencer was so convinced that Toby was really dead, and maybe he actually was. Toby's body could have been replaced with his identical (evil) twin, to get rid of his good guy brother and get close to the girls. Toby being dead and replaced with an imposter would destroy Spoby shippers forever.

We haven't seen Spencer's older sister in a while, which made some fans suspect that it might have been Melissa in the barrel instead of a random rotting corpse. (It wasn't Mona's body, so, who is it?) While no one seems that concerned about Melissa, she has been pretty MIA: could something awful have happened to her after Spencer left London? If Wren is still our biggest uber A suspect, then Melissa might want to watch out.

This fan theory, from Reddit user BigBootyJoody, states that it's Veronica who actually offed Ali's mom. We know that Jessica died from taking the wrong medication, and that it was the same one found in Veronica's husband's medicine cabinet. Veronica made it clear in the Season 6A finale how much she loathed Jessica, and so far she seems like the person with the most to gain from getting rid of her. It would be seriously sad to see Veronica as a murderer, but hey, I guess it's true what they say: never turn your back on a Hastings.

The Bros Watch PLL Too podcast came up with this insane theory about Emily and Hanna being imaginary, and though it's totally bananas it is pretty compelling. In the theory, Spencer and Aria are patients at Radley, while Emily and Hanna simply don't exist. The reason that the bros give us for this theory is that both Spencer and Aria seem to have a somewhat loose moral compass, and that they share more similarities with the other girls than each other. (Hanna and Aria have similar family structures, while Emily and Spencer are both tall, athletic, and good students.) Though the theory is completely far-fetched, it does give you a cool lens to re-watch the show through. If the theory did come true? Well, that would be heartbreaking on a whole other level.

As fun as these theories are, let's hope that they never come true: we can only take so much PLL associated pain. Cut us some slack, I. Marlene King!