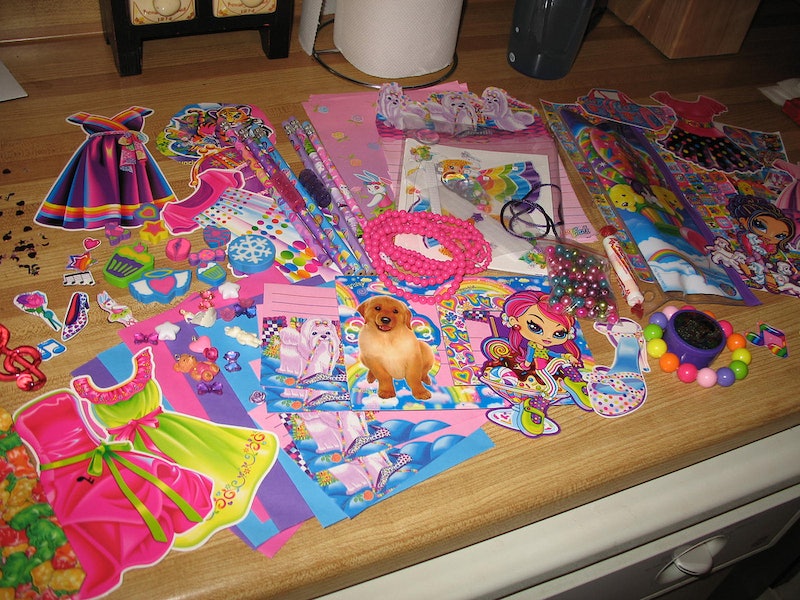 Although I'm generally big on introspection, sometimes, memories are best when they're simple, viseral reactions. That's the kind of response I had upon viewing each and every one of these GIFs of the '90s — and, indeed, I'd go so far as to say that they're all so '90s, it hurts. Not in a bad way, though; just in that wacky way that nostalgia has of hitting you right in the feels. Some might describe it as "sweet agony."

So: How did I curate this list of painfully '90s GIFs? My criteria was simple — each GIF just had to embody at least one aspect of the '90s. In some cases, it's due to the source (hi there, vintage Nickelodeon); in others, it's due to the color palette (that is, primarily neon); and for still others, it's due to the fact that it depicts something that more or less only existed in the '90s. Not that those are the only possible reasons for any single GIF's inclusion; basically, as long as I could look at it and go, "AAAAAH! That is so '90s!", it was fair game.

Obviously this isn't a comprehensive collection of every '90s GIF on the Internet. It is, however, a collection of some of the most '90s of the bunch. Although consider yourselves warned: Viewing them all in one sitting is a little... much.

You can handle it, though. Right?

3. But This Totally Was

At the time, at least.

4. The Perfect Reaction To Everything

5. The Other Perfect Reaction To Everything

I don't even know what this girl is doing, exactly — but whatever it is, it's working.

7. The Magic of Snacktime

Although be honest: Would you have really wanted your head to turn into a gigantic piece of fruit?

It's only in retrospect that I realize how weirdly obsessed the '90s were with mashing together live action and animation.

Something tells me the Oculus Rift does not fill the air with squiggly prism rainbows.

You can tell by my super cool rainbow shades.

Before #squadgoals were even a thing.

All That's best comedy generally relied on non-sequiturs and absurdity, which is why "EveryDay French With Pierre Escargot" and "Vital Information For Your Every Day Life" were such succeessful recurring sketches. And you know what? They still make me laugh.

I was going to make a "getting jiggy with it" joke, but I don't really think I have to, do I? It does it aaaaaaall on its own.

Noodle hair and all.

21. The Original Intention Behind Gaming Consoles

My, how the times do change.

Just everything about Rayanne.

23. A Meeting Of Two Masters

OK, but who do you really support?

24. When MTV Actually Meant What It Stood For

I'm not usually an "IN MY DAY, MTV ACTUALLY WAS MUSIC TELEVISION!" grumbler... but I do kind of love this logo. It's just a perfect encapsulation of everything about the '90s:

So, for that matter, is this:

25. Everything But The Kitchen Sink

And you can be sure that that metaphorical sink is definitely neon.