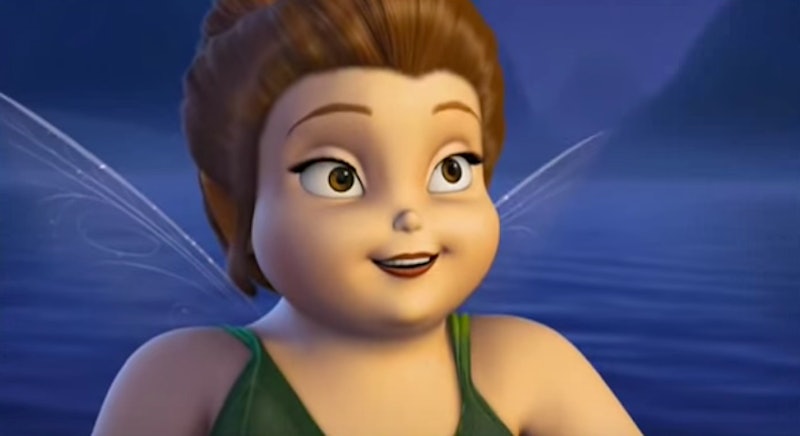 As a Millennial woman, I wouldn't automatically think to describe Disney characters as "body positive." For decades, we have seen pretty princesses with slim figures and white bodies gracing our screens, after all. But when you start actively seeking out body positive Disney characters from your favorite movies, you might just be surprised at how many there actually are.

The thing is, the world is slowly changing and I'm relieved. Not only have there been recent steps taken away from the anti-feminist portrayals of women in Disney movies, but tons of people of different sizes, shapes, colors, and styles are finally being embraced in the storylines as well. As a straight size, white woman, I acknowledge the privilege I have in the world at large. I know most of the bodies I see in Disney movies do, in fact, relate to my own. But when I think about the many people who've been denied representation, I can't help but feel more than a little angry that it's taken this long for progress to be made.

I know we're only seeing the beginning of what body positivity can accomplish, and there is still so much work to be done in order for all humans to be perceived as equals. In the meantime, I wanted to celebrate some of the amazing body positive characters already in existence in your favorite Disney movies.

Although Cinderella's fairy godmother is not a main protagonist in this classic fairytale, she does play an important role. She is essentially an older woman who most of us might associate with someone's grandmother or our own. To see a woman who could feasibly be over 70 portrayed not as a villain or a shrew but as a heroine of sorts is undoubtedly body posi. Here's to fighting ageism, one sprinkle of fairy dust at a time.

Singing songs, creating magic, and teasing evil queens is all in a day's work for the charmingly chubby Cheshire Cat. He's undoubtedly making a case for the coolness of all the fat cats of the world.

Flora, Fauna, and Merryweather fly the flag high for body positivity by showcasing their different physiques. Flora was a buxom babe, Fauna had dainty features with curvaceous hips, and Merryweather was a petite yet plus size enchantress. It is wonderful to see a range of beautiful bodies in a movie that is over 50 years old.

Dogs are often thinking about food and Rolly from 101 Dalmatians was no exception. He offered light comedy in moments of peril and IMO he was the most realistic pup of the litter. I grew up with a dalmatian (named Rolley with an "e") and he was just the same: His appetite was never ending. Disney's Rolly was a poster pup for the notion that there's nothing wrong with enjoying a good meal. So here's to fighting food shaming, one sandwich at a time.

Winnie the Pooh was such a lovely, bumbling little bear who always seemed to be getting into mischief. He had a super cute little belly and a love for honey. I love this moment from the 1977 movie, which highlights the importance of body positive inclusivity in everyday life. Pooh is perfect just the way he is and the door should be able to accommodate him — not the other way around.

Upon embarking on my quest to find body positive Disney characters, Ursula immediately sprung to mind. This sea witch is a body pos badass who is not only confident in her own skin but who also flaunts her full figure to boot. Of course, there are a couple of things that are not so awesome about her portrayal. The first being the idea that being big makes you bad. When Ursula goes undercover as Vanessa in an attempt to sabotage Ariel and Prince Eric's relationship, she is suddenly pictured as straight size and slender and feigns being a "good" character.

Even though she arguably transformed into a slimmer woman to appear "more attractive" or "more approachable" or something equally horrific, she never seemed uncomfortable in her plus size body. In the moments when she remained fat, she also remained fabulous.

Although Disney was a little off with some aspects of their portrayal of Ursula, they were bang on with Ariel's BFF Flounder. Although not scientifically correct — flounder are a group of flatfish species, but Disney's Flounder is based on a tropical fish — he's a great body positive addition to the movie with his cheeky chops, rotund body, and overall positivity.

Much like Cinderella's fairy godmother, Mrs. Potts acts as a guardian (of sorts) to Belle when she is held prisoner in Beast's castle. What I love about Mrs. Potts is that her portrayal as a teapot really suited the curvy lady we see at the end of the movie.

I love how Mr. and Mrs. Potato Head are true advocates for body positivity and diversity. Their body features are constantly changing (much like real people) and to me they symbolize the phrase (and The Mighty Boosh song title) "it's what's inside that counts." Their looks may be constantly changing, but their personalities are consistent. That's a body positive mantra anyone could benefit from, including those who love to switch up their styles frequently.

Mulan was an epic body positive icon. Sure, she could be classed as straight size (body positivity is for everyone, y'all), but she was and still remains an advocate for strong, athletic women out there. Let's all celebrate killer calf muscles more often, OK?

Heimlich the caterpillar is a bundle of joy and a total role model. Throughout the movie, he is unhappy with the way he looks since he can't wait to be a butterfly. You expect to see him emerge from his cocoon at the end of the film looking slender like Gypsy the gypsy moth, but he surprises everyone by popping out as exactly the same, but with the addition of a small pair of wings.

You then realize that it wasn't the figure he desired, but rather the wings and everything that comes with being a butterfly. To me, it was a metaphor for being excited for the next stage of his life, rather than being excited for his body to change shape.

Just like grown-ups, not all little girls look (or should look) the same, and I loved this representation of a more realistic kid in Lilo and Stitch. Lilo was a celebration of all different sized people, be they adults or children. What's more body posi than that?

Russell from Disney Pixar's Up was also a fantastic emblem of diversity in the portrayal of children in animated films. His character was based on voice actor Jordan Nagai, who is Japanese American, and it was brilliant to see Russell come to life as the first Asian-American figure in a Disney Pixar lead.

Can we talk about Merida's fabulous hair? Her lioness mane was stunning, and was such a breath of fresh air compared to the decades of sleek brown and blonde locks of previous Disney princesses. Plus, this brave heroine had killer curves and a darling round face, which IMO made her the most realistic Disney princess to date.

Fairy Mary is Tinker Bell's mentor and friend. She blasts through the horrendous stereotype that being fat makes you clumsier or automatically less athletic in a fabulous scene in Secret of the Wings where she elegantly and gracefully exhibits her beautiful ice skating skills.

These Disney characters are advocates for the body positive movement, but they're only beginning to scratch the surface. May there someday be many more!

More like this
Lin-Manuel Miranda & Tituss Burgess React To 'Little Mermaid' Casting Backlash
By Radhika Menon
The Chicest ’90s Updo Hairstyles To Try
By Paris Giles
TikTok's "Would I Look Good With Short Hair?" Hack Is Genius
By Olivia Rose Ferreiro
13 Memorable Beauty Moments From Paris Fashion Week S/S 2023
By Olivia Rose Ferreiro
Get Even More From Bustle — Sign Up For The Newsletter