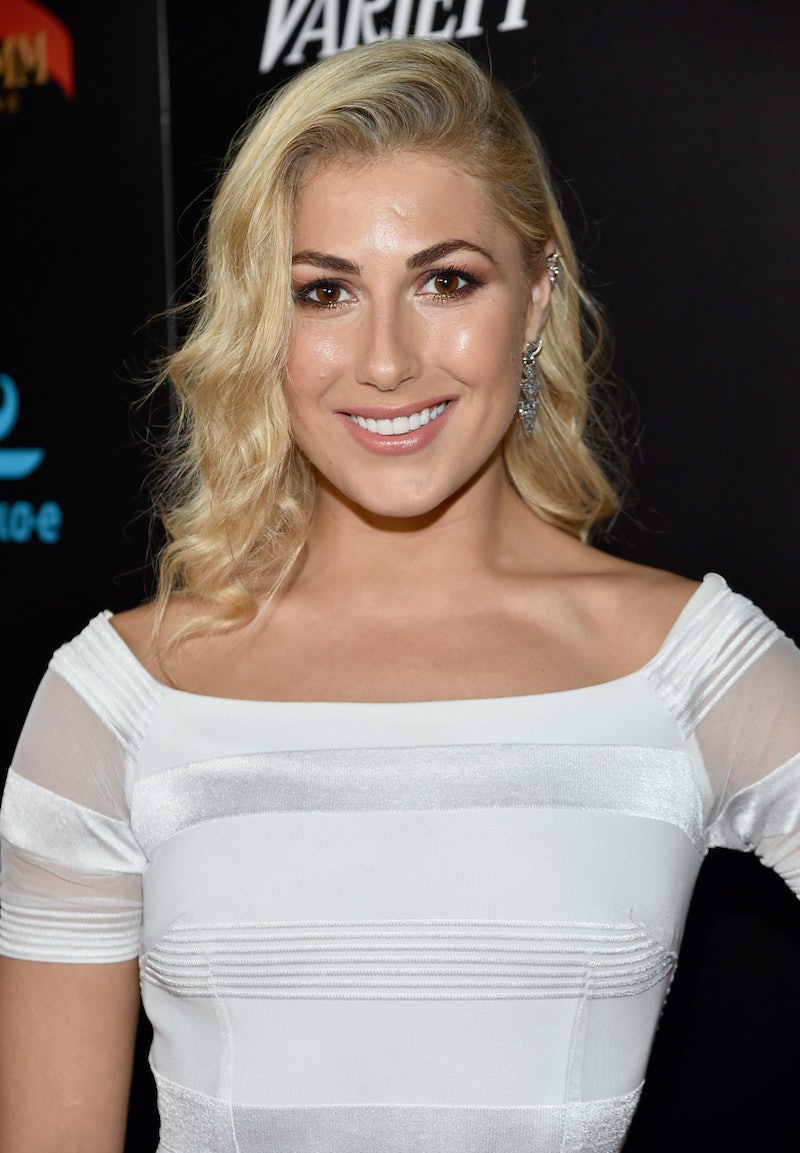 Everybody loves a good romance, and everybody hopes that his or her favorite couple on Dancing With The Stars will magically fall in love and dance on and on forever and ever. But typically, it doesn't quite happen like that. It strikes me now that one of the most popular DWTS pros Emma Slater, is single, and I just can't figure how that can be. She's gorgeous! She's vivacious! She's smart! She can dance! What's going on here?

If it's one thing that I can determine, it's that her Season 21 partnership with Internet Vine star Hayes Grier is certainly one that will not come to romance. Hayes is 15; Emma is 26. They don't even get the same cultural references. Hayes is whip/nae nae-ing and Emma, like myself, still remembers doing the Macarena at Bat Mitzvahs and Sweet Sixteens. It would just never work out.

She did once date fellow Dancing With The Stars pro Sasha Farber from 2011 to 2014. In an interview with Glamour, Emma spoke of her breakup saying, "[Sasha] is just the best person, [but] I don't think we're supposed to finish together." Apparently, the two knew their relationship wasn't working and made the conscious adult decision to call it quits. How mature of them!

Though Emma is single now, she certainly won't be forever. In fact, she could even find love on this season of DWTS with one of these fine men.

I don’t know about Emma, but the 11-year-old in me would freak out at the thought of marrying Backstreet Boy Nick Carter. We’d sing “Quit Playing Games (With My Heart)” every day for the rest of our lives. Unfortunately for both past me and Emma, Nick Carter married fitness instructor Lauren Kitt last year, so he’s off the market. Oh well. At least he’ll never break Lauren’s heart or make her cry.

Val is the smoldering bad boy of the Dancing With The Stars pro squad (sorry, Derek), but he and Emma totally are not dating. Why? Because they are the best of friends. Emma told Glamour that she and Val “connect on a lot of levels.” They’re very, very close pals, but I wouldn’t necessarily count out love — romance can sometimes grow from friendship...

Now this is the relationship that everyone on Dancing With The Stars wants to see. Alek and Emma were paired during the partner switch week, and their chemistry was pretty electric. Alek literally found himself speechless during rehearsals because Emma is, in his words, “so hot.” The two seem to be spending a lot of time together between rehearsals (they even went to Oregon, Alek’s home state, when they were partnered up), so maybe something is blooming there.

The “Honey, I’m Good” singer has rocketed up the charts and the Dancing With The Stars standings as of late. Emma’s out of luck if she’s interested in Andy, though— he’s been married to actress Aijia Lise since 2012.

Carlos is, in my opinion, the other Dancing With The Stars dude to beat (besides Andy). He’s handsome, he’s charming, he’s talented, and he knows his way around a Magic Mike rumba. Too bad he is also married—his wife, Alexa PenaVega, is also a contestant on the show.

It seems if Emma is looking for a boyfriend (or just a fling), Dancing With The Stars is not necessarily the right place! If she doesn't settle down with Alek (Emmek/Alma forever), she’ll have to dance into the heart of an outsider.