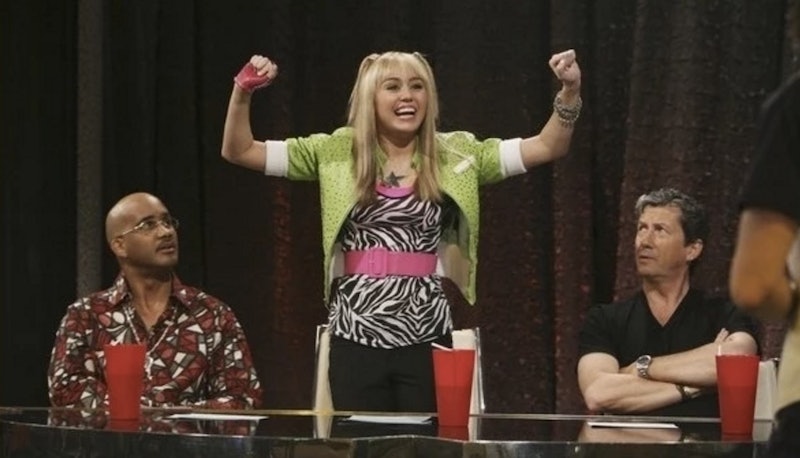 Hannah Montana may have had the best of both worlds, but one thing she didn't have was ensembles that stood the test of time. When I revisit my favorite Disney Original television show, all I see are the outdated outfits on Hannah Montana. Even though the gal certainly put together some drool-worthy ensembles from time to time, they aren't what you might call "classics" four years down the line.

Back in middle school, however, I would have defended any outfit I saw Miley Cyrus wearing. That show was my lifeline, and the style inspiration it gave my late middle school self in 2006 was serious. Whether through a sequined vest, a ruffled satin mini skirt, or even a belt over a shirt, there was no trend or style that I didn't want to try out personally.

That being said, things have changed. I don't regret being completely infatuated with the looks Hannah Montana rocked back in the day. However, there are some former gems that now just make me cringe. Let's look back at 13 of the most outdated looks straight from Hannah Montana herself that will simultaneously make you cry and laugh.

Remember when everyone had to have something by Ed Hardy? Well, apparently Hannah Montana was just the same. Although this look — with the T-shirt over an equally troubling long sleeve — was not doing her alter-ego any style favors.

Um, Ms. Montana? I believe a rainbow has taken up residence in your wardrobe. And that's not as cool as it sounds. This outfit is for sure a one-of-a-kind combination.

There's no doubt that bomber jackets are a thing, and will likely stay a thing for years to come. However, this green, cropped version with short sleeves is not exactly the classic bomber you want to keep around forever.

OK: I admit that the top half of this outfit is actually pretty cute. I would wear a sparkly denim vest over a T-shirt any day. But personally, I don't want anything to do with that zebra print mini skirt with ruffles. Yes, I probably adored it back in the early 2000s. But these days, I would just rather not.

I still remember the Hannah Montana intro outfit because I duplicated the same ensemble for my eighth grade Halloween costume. Back then, I thought this outfit was the epitome of style. What a strange girl young Melodi was.

I won't even lie: The T-shirt under a dress trend is very much "in" right now. However, Montana's version with the T-shirt, the ruffled mini dress, and the yellow belt could hardly be called trendy. There's simply way too much going on, y'all. And not in an Iris Apfel sort of way.

The only excusable part of this outfit is the Converse sneakers. Those are totally great. Even eighth grade me would have told you that those jeans were a little bit questionable. OK, a lot questionable.

Have you ever seen a belt so wide that it's basically a corset? I certainly haven't. Well, at least, not anywhere besides Hannah Montana. Let's just say that this colorful, super belted ensemble is better left in the past.

This dress could be kind of pretty, if the print wasn't something so reminiscent of '70s disco-wear.

The chambray trend has proven that you can never have too much denim. The real kicker here is that outdated, sparkly tunic that used to be everywhere in the 2000s. I swear I even saw those at Claire's, because no one could escape the tunic.

There's nothing like a classic shrug motorcycle jacket, said no one ever. I applaud Hannah's efforts in the edgy style arena, but this studded and shrugged version of the motto is so not working.

I have no words for the belt situation anymore.

I'm all for fringe, but that fringed chain detail on Hannah's tank top is so nine seasons ago. The pink jacket is cute, yes, but the combined look is just a little bit too 2009.

Well, Hannah Montana's outfits might not be surviving the test of time. But at least her tunes can still pump up the party.