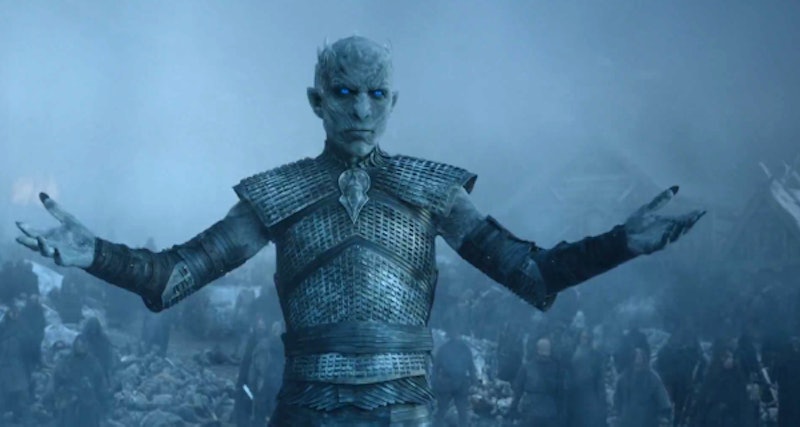 Guys, we've been so foolish! We've been so amped up trying to figure out whether Jon Snow comes back in Season 6 of Game of Thrones that we've been ignoring some perfectly good Game of Thrones Season 6 finale spoilers sitting right under our noses! How did we let this happen? Obviously, I'm as curious as the rest of you about whether our ringleted friend will be coming back from the dead, but we need to mentally prepare ourselves for the fact that he might not, and prepare to move forward without him. *Sob* And part of doing that is finding new aspects of the show to obsess over, like the Season 6 finale. The Season 6 premiere hasn't even aired yet, and likely won't until April 2016, but the show has been filming in Belfast for most of the year, and there's a new photo from set that delivers some crucial information about what might be coming up.

And what might be coming up can be distilled into two words: White Walkers. Remember, this next season is going ahead of where George R.R. Martin is in the books, so no one (aside from the showrunners and Martin) knows what's coming, and even figuring out which characters might be involved is new and valuable information. This info comes to us from a reliable source, GoT director Miguel Sapochnik — who previously presided over the episode "Hardhome," where we initially met the White Walkers in Season 5. He is apparently returning for at least one episode in Season 6, if this tweet is any indication:

I'm sure you can see for yourself, but in case you're having difficulty putting the pieces together, that's a photo of a clapperboard from Episode 610 of Game of Thrones, which works out to Season 6, Episode 10, aka the finale. We can see that the episode was being filmed in March of this year, and most importantly, along the bottom, it says "White Walker Unit." Eeeee! A whole unit! So an army of some kind? A battle? We don't have those kinds of details yet, but there's no way they'd tease us with the phrase "White Walker Unit" if there weren't at least some White Walkers present in the finale, right?

So screw Jon Snow! (I don't mean it, I'm sorry!) I'm gonna turn my energies to this potential storyline for a while, because you know what they say: A watched pot never boils, and a watched Bastard never resurrects.