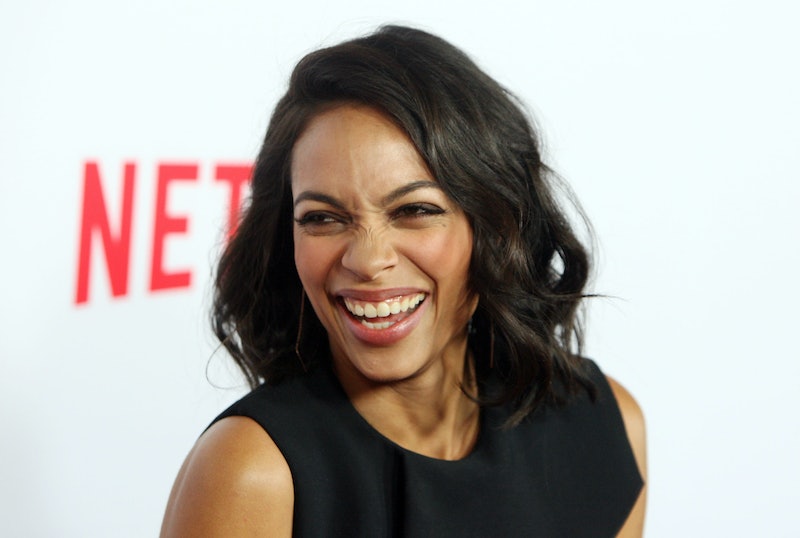 It's no secret that streaming services like Netflix, Hulu, and Amazon have completely changed the world of television. Racking up Emmy and Golden Globe nominations alike, shows that air through these outlets are just as praiseworthy as their cable TV counterparts. An example of Netflix's success? Marvel's Daredevil and its highly anticipated spin-offs: Luke Cage and Jessica Jones. During a chat with Rosario Dawson via phone, the actress confirms her character Claire Temple will appear in all three shows. "Having characters like Claire that I get to explore through those new outlets is really exciting to me," she says. "Marvel hasn’t done this before. Netflix hasn’t done this before. It’s a groundbreaking moment and it’s great to be part of."

Dawson couldn't be more right; it really is a major moment. The popularity of shows like Orange Is the New Black, House of Cards, and even Aziz Ansari's new Master of None speaks volumes. She explains, "Binge-watching would be something you did when you were sick. Now you can have a proper show that premieres on Netflix and a lot of people are watching it — not just when they're bored on weekends. It's actually infringing on work and sleep."

Tying into this innovation, it's awesome to see Dawson play such a smart, strong female character in the comic-book world — something that itself shows progress. "Claire Temple is an amazing person. She's been really interesting to play," the 36-year-old explains. "I have no idea where she’s going, because Marvel is a beast and they’re really secretive." She lets out a laugh at that last part, but raises a great point. Marvel is a force to be reckoned with — in the best way possible.

Unable to divulge many details about the actual shows (despite pleas for Daredevil Season 2 spoilers), Dawson says, "They’re making every single character in this universe really interesting and fun and necessary and badass, and I couldn’t ask for more." While she doesn't know how exactly Claire Temple fits in overall, she shares, "They’ve got me peppered around. They’ve got a storyline that I’m still not privy to. I’m in the dark about it, but I’m believing in the Marvel family. I trust that it's going to be great."

Something else that's great? The recent surge of strong female characters in action roles — like the new series Supergirl and the all-female Ghostbusters remake. Dawson says, "It’s just time. It's never, in my opinion, been a question of 'if' — it’s always been a question of 'when.'" She also acknowledges all of the efforts that led to this point, adding, "We’re doing this on the backs of many other people behind us in generations, who have made it possible... This fight is not new, but some of the steps forward have definitely been modern steps."

Continuing to discuss this progress, Dawson says, "As much as some people would like to believe, we are not a post-feminist society. But the fact that we’re talking about it and it’s being explored and challenged in the way that it is right now... it’s incredibly encouraging to me." While we may not be there just yet, she explains, "We’re on the forefront of another major stride forward for girls and women, which I think is really necessary. And for men, because it's a huge disservice to men and boys to not have strong female characters that they're also being exposed to."

Speaking of powerful roles, Dawson's Marvel character isn't her only experience in the comic book realm. She'll be voicing Batgirl in the upcoming Lego Batma n movie. "I feel like I’m a cheater, jumping between DC and Marvel like that," she jokes. "But it’s really fun." Comics and video games have been a lifelong passion for Dawson, who even created her own comic book called O.C.T.: Occult Crimes Taskforce. She says,

These are the companies that I’ve loved since I was a little girl. My uncle is a comic book artist. He told us stories and gave us characters to explore that helped us understand ourselves better and challenged us to really think about what kind of person we would be. We all have the option to be a hero or heroine. Do we actually do it?

The actress is genuinely excited to continue exploring these worlds as an adult. "People who never thought of themselves as comic people are liking the genre and giving it a second look," she says. "We’re able to deliver to them in a way that’s really interesting and irresistible, and that’s awesome."