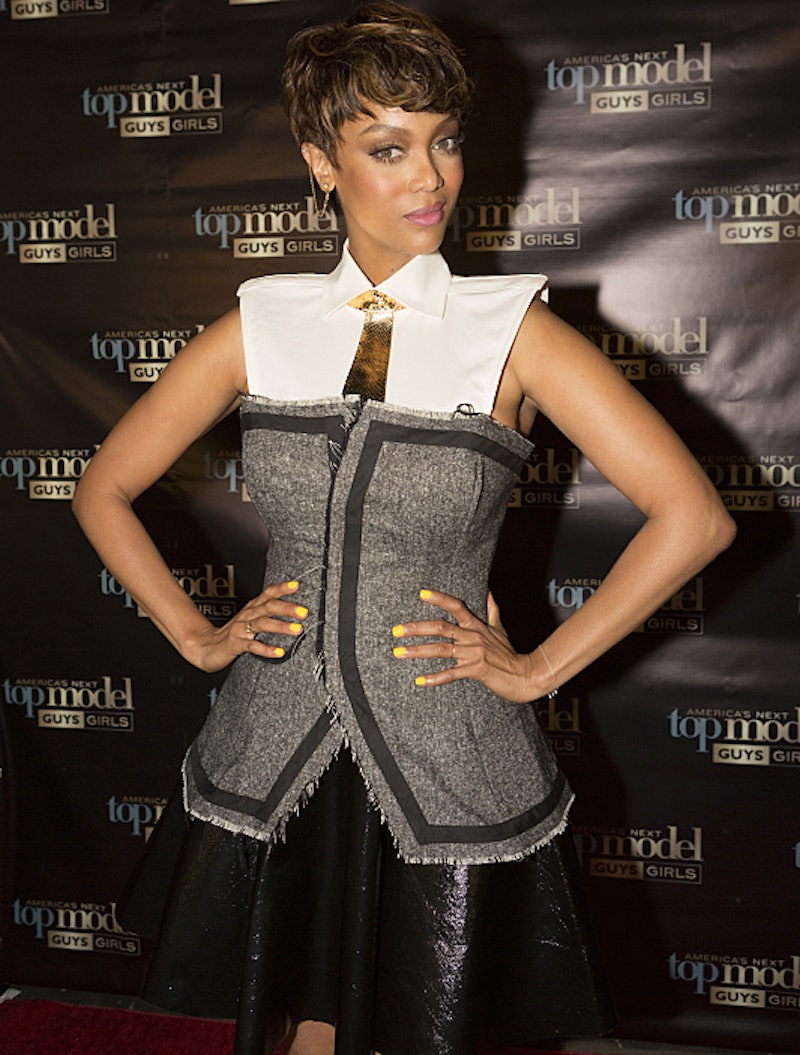 On Dec. 4 on The CW, the series finale of America's Next Top Model will air. After 22 Cycles, I think it's fair to say Tyra Banks, the woman who gave us the beauty and rawness of ANTM, deserves to be praised. With her skills of striking a pose, dropping words of wisdom she has educated a generation of people watching Top Model marathons on the weekend about what it takes to be a model. Basically, Tyra Banks is full of life lessons on ANTM, and she deserves to be commended for her wealth of wisdom.

Yes, the woman brought new meaning to the world "fierce" and created the word "smize" (Oxford Dictionaries can acknowledge the "Face with Tears of Joy" emoji, but not "smiling with your eyes"?!? How insulting), among many other words. Yet, you won't find Tyra's made-up words on my list of life lessons since she has already been acknowledged time and time again for her great additions to the English lexicon. Instead I want to address all the great life lessons she's imparted on her viewers.

America's Next Top Model may be over (hold back the tears!), but Tyra's teachings will live on forever. Here are just 11 of the greatest lessons the supermodel gave to her fans.

1. Don't Be Afraid To Be In Charge

The self-proclaimed feminist (go, Tyra!) has long been promoting women-friendly messages like this Cycle 21 wisdom that a woman shouldn't be perceived as bossy or b*tchy when she's in charge, and she should be a proud leader. Preach, Ty Ty!

Although Frozen may have brought this term to notoriety recently, Tyra gave Mamé a "Ty Ty tip" in the second-to-last episode of ANTM ever, "Finale Part 1: The Girl Who Made a Splash," that she needs to "Let it go" to bring it to the next level. While this is classic vague Tyra, I believe she meant that Mamé needed to shake off the self-conscious attitude and go for it — something everybody (except maybe Tyra) needs to be reminded of at times.

Above is just one of the many, many examples of how Tyra has proven this lesson. And, it helps us common folk feel better about ourselves after spending an hour watching beautiful people strut/is always good for a laugh.

4. Modeling Is Harder Than It Looks

Beyond Tyra's critiques of the contestants when their photos looked too posed or they couldn't successfully walk in heels, she gave the aspiring models other challenges. For example, the ad-libbed Covergirl commercial challenge from Cycle 6 proved that Tyra's gift of great bullsh*t is not something that comes naturally to all models.

5. "Take Responsibility For Yourself!"

6. It's OK To Make Fun Of Yourself

...after the appropriate amount of time. 15 cycles after infamously yelling at Tiffany, Tyra mocked herself by quoting a line from the freakout, "I have never yelled at a girl like this in my life!" See? Even when you're Tyra Banks, you can poke fun at yourself.

7. And To Be Yourself

If the above GIF qualifies as "being yourself," then Tyra was a master of it. She was never concerned about looking like a fool, that's for sure.

Tyra is (shockingly) self-aware enough to realize that modeling sometimes isn't a profession that is given the utmost respect. In Cycle 8, she said modeling was like being a ho (not "hoe," the garden tool), but it's up to the individual model to elevate "selling" her body into something bigger — fashion. Her multiple ho-to-fashion poses really brought that message home.

9. No Crying About Boys Allowed

Of course, there was tons of crying in America's Next Top Model, but Tyra disapproves about boys getting you down.

Tyra does have a soul as she exhibited during Cycle 8 when contestant Jael Strauss had a friend die and couldn't hide her pain in front of the judges. The Top Model creator was surprisingly and sincerely sympathetic to Jael's mourning.

11. Know How Damn Fine You Look

No, not many of us are graced with the natural and epic beauty that Tyra Banks has — and trust me, she knows that. But still, she made a show to highlight the careers of aspiring models and it was amazing to watch the contestants transform over each cycle. One of the major lessons that Tyra actually taught me is that you need to put yourself out there and be confident — even while doing perhaps the most ridiculous photo shoot that has ever been conceived. No matter if you're walking down the runway or on the street, embrace that body of yours and just do your thing — like Tyra always does.