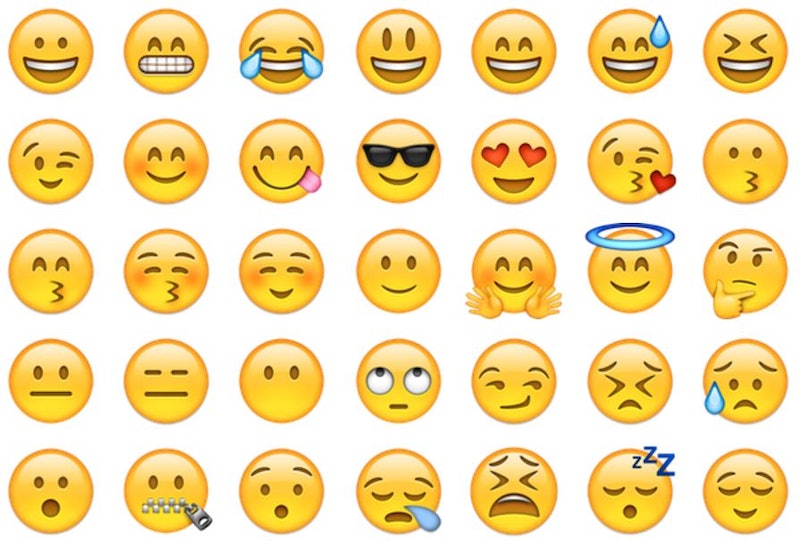 As 2015 comes to a close, it's fun to reflect on trends and patterns that took place over the year so we can accurately assess both where we've come from and what direction in which we might be headed. Case in point: The most popular emoji on Twitter for 2015. This year was an important year for the little pictograms — with the diverse emoji update, the iOS update that added several new emoji, and the fact that one of the words of the year was an emoji, it's hard to deny that emoji aren't an important part of our lives and day-to-day activities. Emojis have taken over billboard advertising to appeal to younger audiences, are dealt out in the form of playing cards, and can even be used to order pizza. What a time to be alive!

Twitter's 10 most popular emoji of 2015 hail largely from the classic Unicode release and not the most recent update; not only have we not had a whole lot of time to use all those tacos, middle fingers, eye rolls, and unicorns, but moreover, they're not available on all platforms yet. I'm betting that 2016 will see a rise in the use of the Unicode 9.1 set, though — even if it's just from me using the cheese wedge emoji way too much.

Without further ado, here are 2015's 10 most popular Twitter emoji.

The fire emoji is used more to discuss something super sexy, suave, or awesome, rather than an actual fire. Mix tapes can be fire, outfits can be fire, and eyebrows can be especially fire.

Apparently a lot of people were laugh-clapping or giving someone a round of applause in 2015, because the clapping hands emoji nabbed the number nine spot this year.

The winky-kissy face emoji, one of the classics, is the eighth most used emoji of 2015. Everyone likes giving and receiving a good kiss every now and then.

The popularity of this emoji surprised me initially, but when you think about how many things sparkles can be applied to (a bright smile, a new car, Kylie Jenner's entire aesthetic), it makes a lot of sense.

The revolving heart emoji shows two hearts joined by a pretty pink swish, indicating that two lovers are joined together at the heart. OK, so that's just my interpretation of it, but why not make the hearts as cheesy as possible?

For when you want to express your deep, undying love and gratitude for a friend, a lover, or your favorite politician.

1. Face With Tears of Joy

Of course the number one emoji of the year was also one of the Oxford English Dictionaries words of the year. That's how popular it was, and how could you not love it? It combines a laughing emoji with a crying emoji and expresses one of our deepest, most complicated emotion — the desire to cry while happy.