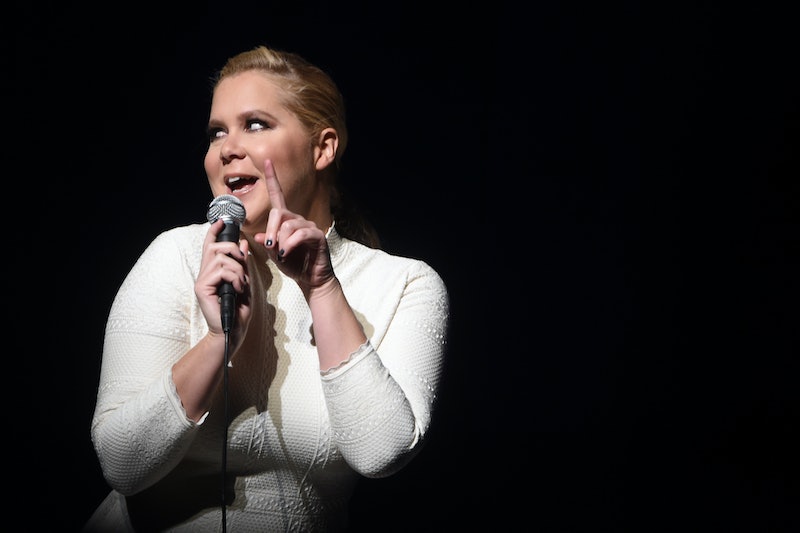 After what feels like months and months of waiting, the 2016 Golden Globe nominations were finally announced on Thursday, with some of the strongest categories, like, ever. One of those categories that it's going to be near-on impossible to choose a winner from is surely the Best Actress — Motion Picture Musical Or Comedy category. Perhaps the most interesting dynamic at play in this category is the fact that two of the nominees are brand new BFFs. Amy Schumer and Jennifer Lawrence are writing a movie together, and run with the same squad now. So, as these besties battle it out, is it possible to decide between Schumer and Lawrence? Should we even?

Alongside Schumer and Lawrence are some Hollywood heavyweights — Lily Tomlin and Maggie Smith are both nominated in this category — as well as some of cinema's finest comedians. Melissa McCarthy is nominated for her lead role in Spy, while Amy Schumer is nominated for her lead in Trainwreck, and Jennifer Lawrence for Joy. How anyone can choose between these feminist powerhouses is beyond me, and I'm sure glad it's not my decision to make. I imagine that Schumer and Lawrence have already had a great laugh about the fact that they're battling it out against each other. Maybe we'll even get another amazing comedic shot, like the one between Lupita Nyong'o and Jennifer Lawrence from the 2014 Oscars.

While Lawrence's star has been solidly rising over the past few years, Amy Schumer has undeniably smashed it in 2015. Trainwreck , which Schumer wrote and starred in, was one of the major hits of the summer, while news of her $8 million book deal has been major news across the world. Compared to Lena Dunham's book deal for $ 3.7 million, it certainly seems that Schumer has hit the zeitgeist, and is on track to be the world's next megastar. That probably means taking home some trophies this award season.

Saying that, Jennifer Lawrence is consistently flawless, and is no stranger to the Golden Globes herself. She won Globes in 2013 and 2014 for Silver Linings Playbook and American Hustle, so taking home another so soon for Joy would certainly be a coup. As Joy is also directed by David O. Russell, who directed both her other winning roles, it seems like Lawrence could be in with a great chance of winning.

Of course, considering the calibre of the other nominees in this category, Schumer and Lawrence could both lose out. Like I said, I'm super glad I'm not making this choice. Whatever happens, I'm sure that Lawrence and Schumer will stay true to their #SquadGoals, and the movie they're writing together is going to be killer regardless. In fact, I'm sure it won't be long before we see that movie going up for a Golden Globe, so Lawrence and Schumer can share the award, the way the universe intended them to.

More like this
Amy Schumer Is Actually The Other Kardashian Sister You Never Knew About
By Jake Viswanath
Shocked Fans & Former Co-Stars React To Ray Liotta’s Death At 67
By Grace Wehniainen
'Stranger Things' Star Joe Keery Is Dating An "Indie Scream Queen"
By S. Atkinson and Grace Wehniainen
Laura Dern Said “Cultural Awareness” Made Her Rethink This 'Jurassic Park' Fact
By Grace Wehniainen
Get Even More From Bustle — Sign Up For The Newsletter