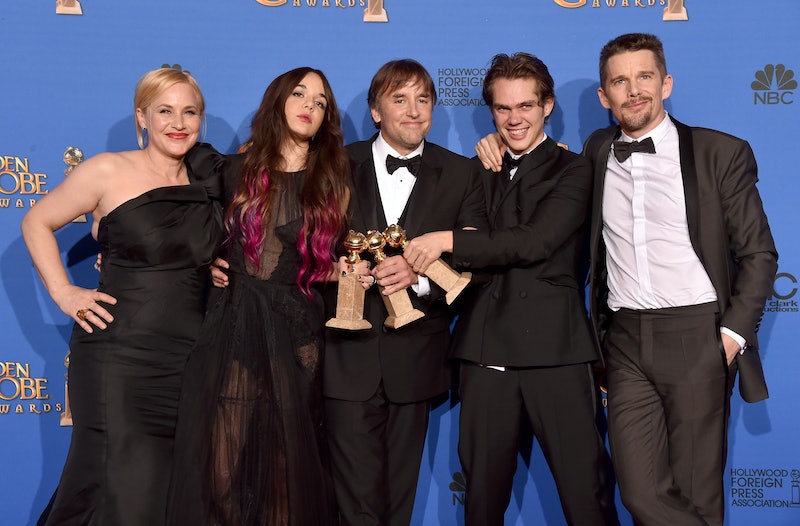 Here we go! The nominees have officially been announced for the 2016 Golden Globes, and awards season is in full swing. There are some deserving nominees this year, and many first time nods, which is exciting. Lady Gaga even got a nomination for American Horror Story: Hotel! But as thrilled as I am that the tidal wave of awards shows cometh (I love awards season, but it's very emotionally exhausting), let's get one thing straight: the categories are so confusing. Especially for the Globes, which honors work in both film and television.

So, besides the expected but still-enraging snubs and the usual lack of diversity, the categories are the most frustrating part of the ceremony. How are they decided? What is eligible? What is the submissions process? Who knows?! For example, there's already some category controversy about The Martian being nominated in the Best Comedy category, since at the Globes, they separate film nominees into Drama and Comedy/Musical.

At the very least the names of the categories could be more honest to reflect how the winners are really chosen. Here's what would be on those magic envelopes if the categories were honest:

But you tried. You really tried. There are just so many movies you promise yourself you'll watch before awards season, but let's be realistic: There's just no time.

Best Actor In Drama, Film Aka Dude Who Was The Darkest

Usually Best Actor contenders are nominated for how complex and dark and method they can get in the filmmaking process, while the Best Actress nominations are relegated to the performances that make you cry the most. But Eddie Redmanye managed both, and he deserved his win last year for playing Stephen Hawking in The Theory Of Everything.

Best Actress In A Drama, Film Aka Woman Who Tore Your Heart Out The Most

Keep the tears coming. I need a good cry at least once a year, and I trust Julianne Moore to get me there.

Best Actor In A Comedy, TV Series Aka Aziz Please!

Just, like, give it to Aziz Ansari. He was nominated this year for Master Of None, one of the most nuanced shows to ever talk about race. And it's hilarious. Doesn't that guarantee a runaway?!

Best Actress In A Comedy, TV Series Aka Everyone Should Win!

Ugh, frustrating, but in a good way. There are too many good female nominees in the comedy television series category. There's veteran Julia Louis Dreyfus, who has won three Emmys for her performance in Veep, though not a Golden Globe. But I also really, really, really want Gina Rodriguez to take home the statue again. How amazing would a back-to-back win for the star of Jane The Virgin be? Can't we award two winners in this category?

Best Director Aka A Bunch Of Dudes

This category always makes me sad. Even though last year it was a thrill to see Alejandro González Iñárritu take home the statue for his direction of Birdman at the Oscars, he lost to Richard Linklater for Boyhood at the Globes. And I love Linklater — like many sad girls, his Before Sunrise series is one of my favorites — but so few female directors and directors of color are ever recognized. This year, no women directors were nominated in the category.

Feel free to make your own categories, too. It's fun to make guesses on which emotionally manipulative film will steal the awards this year!