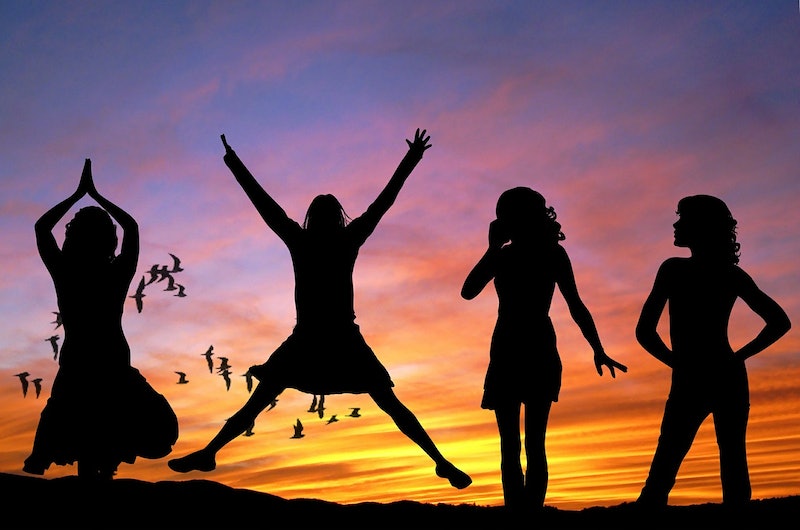 This year has been quite a rollercoaster for feminists. There have been disappointments, such as the insensitive Suffragette photo shoot, and there have been tragedies, such as the terrible Planned Parenthood attacks. But amongst the heartbreak, there have also been victories. And while the journey is far from over, I think it’s important to celebrate the progresses that have been made in the name of feminism.

After all, 2015 has been the year of feminist TV shows Crazy Ex-Girlfriend and Jessica Jones . It’s been the year of the sex-positive Crimson Peak and of Michelle Obama’s feminist Spotify playlist. This was the year we met Caitlyn Jenner, and that the Supreme Court ruled in favor of marriage equality. There have been feminist films, from Mad Max to Magic Mike XXL; there have been feminist essays; there have even been feminist memes. Yeah, I think we feminists can take a moment to pat ourselves on the backs for 2015, before gearing up to fight even harder next year.

And as the only thing I love half as much as feminism is reading, I want to take a minute to run through all the fantastically feminist moments we’ve had in literature in 2015.

1. When Conor Knew How to Talk About Rape in Asking For It

Louise O’Neill’s Asking For It was one of the most important feminist novels of this year. (The U.K. published it in 2015 the U.S. is getting it in April 2016.) It dealt with the horrific gang rape of a teenage girl, and the victim-blaming she endured afterward from her friends, family, and the media. Its power came from the unrelenting and harrowing way the victim Emma was given the blame, even in her own mind — but it was still a massive relief when she was granted a few moments of feminist support. Her friend Conor was pretty much the only person to frame the rape in the right language, saying “I know what they did to you” rather than talking about what Emma had done.

Not only was Jessica Knoll’s Luckiest Girl Alive the most thrilling, genre-bending crime novel of the year, it also managed to sneak in some pretty intelligent Judith Butler-esque feminism. The protagonist, TifAni FaNelli, uses her body as a tool to perform her gender identity, and the self-aware way in which she describes this allows us to follow along with what’s actually some rather complex feminist theory, all under the cover of enjoying a gripping page-turner. Now that’s some clever feminism.

3. When Gloria Steinem Dedicated My Life on the Road to Her Doctor

Gloria Steinem had me crying happy-tears at her dedication of My Life on the Road to the doctor who helped her get an abortion in her 20s. In case you missed it, she credited him for allowing her to live the amazing life she has.

Dr. John Sharpe of London, who in 1957, a decade before physicians in England could legally perform an abortion for any reason other than the health of the woman, took the considerable risk of referring for an abortion a twenty-two-year-old American on her way to India.Knowing that she had broken an engagement at home to seek an unknown fate, he said, “You must promise me two things. First, you will not tell anyone my name. Second, you will do what you want to do with your life.”Dear Dr. Sharpe, I believe you, who knew the law was unjust, would not mind if I say this so long after your death: I’ve done the best I could with my life.This book is for you.

4. When Mindy Kaling Wanted to Date a Feminist in Why Not Me?

Why Not Me? was packed full of empowering statements of self-love, and I adored it from cover to cover. But one section particularly stood out to me as a great feminist moment: Mindy’s thoughts on dating a feminist man. No, not one of those men who call themselves a feminist and then go on to condescendingly explain feminism to women — an actual feminist. In Mindy’s words, she wants a feminist guy “who knows that all that means is that men and women are equal … [and] admires strong women, like Hillary Clinton and Ruth Bader Ginsburg.” Yes, please.

5. When The Need For Intersectional Feminism Was Made Clear in Dirty River: A Queer Femme of Color Dreaming Her Way Home

There’s been a lot of discussion of White Feminism this year, especially surrounding feminists like Taylor Swift and Lena Dunham. While there is certainly good to come from their efforts, feminism really needs to be inclusive and intersectional for it to become truly empowering. That’s why I loved Leah Lakshmi Piepzna-Samarasinha’s memoir Dirty River so much this year: it tells the story of a disabled, queer woman of color and abuse survivor — a woman, in other words, seriously underrepresented in “popular feminism.” This is a book that redefines womanhood and gender identity as something far more complicated than White Feminists suggest.

OK, so Life and Death was just not the feminist novel that Stephenie Meyer seemed to think it would be. In fact, it was even more massively sexist than the original. But, I do appreciate the effort behind it. Life and Death was Meyer’s slightly misguided attempt to subvert the sexism of her original book (and, you know, to make a bit more money) — and I’m always on board with people reconsidering their sexist assumptions.

7. When Girl Sex 101 Was Totally Sex-Positive

Girl Sex 101 is the vibrant, feminist sex-ed scrapbook by Allison Moon and KD Diamond that you’ll wish you had when you were growing up. Sex positivity radiates from every beautifully-illustrated page, but there was one quote in particular so fabulously feminist I kind of want to get it tattooed on my face.

8. When The Argonauts Pointed Out That “Same-Sex Marriage” Is A Misnomer

Maggie Nelson’s The Argonauts has been praised for being a great guide to queer theory, and for many people, it has been an introduction to a whole new way of thinking. Nelson’s explanation of why “same-sex marriage” is a misnomer is also a particularly feminist moment, as it contradicts society’s underlying prejudice that lumps all women in together. Nelson says that “whatever sameness” she feels with women is not because of their gender, but because of their “shared, crushing understanding of what it means to live in a patriarchy.”

9. When The Story of the Lost Child Questioned Why Babies Are Named After Their Fathers

The debate over whether or not women should take their husband’s last names can be complicated, so I don’t necessarily agree with the suggestion made in the book that changing your surname after marriage is “stupid.” But I often wonder why it is still so much the default in many cultures for children to inherit their father’s last name, even when their mother has kept her own name. In Elena Ferrante’s latest Neopolitan novel, Elena’s daughter poses this same question. Babies come from women’s stomachs, she point out, and those stomachs belong solely to the women, not their husbands. Therefore, she concludes, babies should inherit their mother’s surnames.

10. When Sonia Manzano Grew Up And Became Maria From Sesame Street

Becoming Maria is an against-all-odds, coming-of-age memoir of Sonia Manzano’s turbulent childhood with an alcoholic father — and the dream that kept her afloat throughout her hardest times. As Manzano, a poor Latina girl, succeeds in her goals and becomes a strong and resilient woman bringing inspiration to millions, you’ll be punching the air in feminist triumph, all while reaching for the tissues.

11. When The Girl in the Spider’s Web Confronted Internalized Misogyny

Sexism isn’t just something that men are guilty of toward women; the misogyny that women internalize toward themselves is just as dangerous. In David Lagercrantz’s The Girl in the Spider’s Web, Erika Berger is forced to recognize that her dislike for an actress due to her overtly sexy roles is a form of this internalized sexism — and is damaging not only to the other woman, but also to herself.

12. When We Should All Be Feminists Was Handed Out to All 16-Year-Olds in Sweden

As more and more celebrities publicly denounce the word, it can sometimes seem like feminism is under attack from all corners. So when the Swedish Woman’s Lobby announced its intention to distribute Chimamanda Ngozi Adichie’s fantastic book We Should All Be Feminists to every 16-year-old student, you could almost hear the feminist cheer ring out across the country. This is feminism being taken as seriously as it deserves to be.