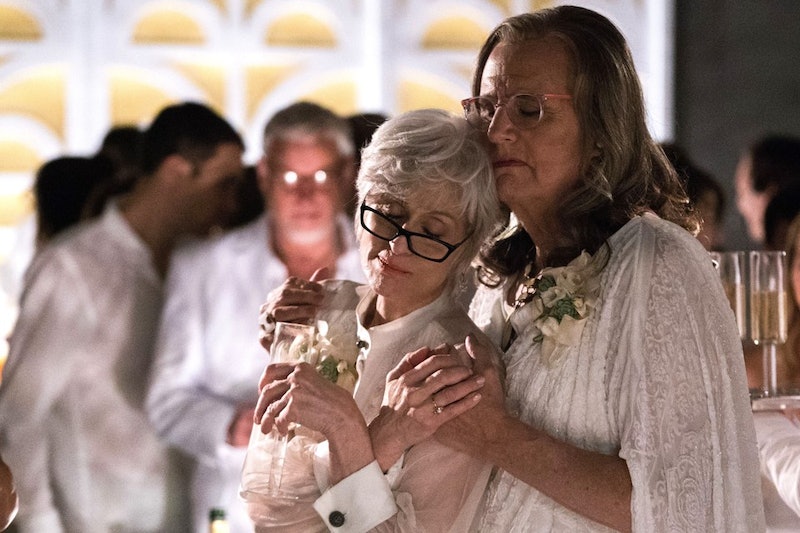 Since its Season 1 premiere last year, the award-winning show Transparent has humanized the experiences of gender and sexual fluidity within the context of the dysfunctional Pfefferman family. Under the leadership of creator Jill Soloway, the show has portrayed the life of a trans woman through Pfefferman parent Maura (played by Jeffrey Tambor). So far, it's been a huge win for introducing more queer visibility into mainstream media, as well as starting conversations about trans and gender nonconforming identities among its viewers.

However, the show has still been met with some critique. Besides the whitewashing of the show, there was the issue of cis actors playing trans characters, and the absence of trans writers and producers. However, Season 2 clearly sought to amend this (at least in part) with the addition of some new team members, and by delving into deeper issues within the queer/trans community.

This season captured a lot of lessons about gender identity, starting right away in Episode 1 where the family's wedding photo shoot broke up after the photographer misgendered Maura, calling her "sir." Between discussions of political correctness and gender reassignment surgery, to the feeling of being excluded from a pseudo feminist "women's only" space as a trans woman, each episode covered a lot of ground in addressing issues that hold lots of weight within the queer community, and are important for wide audiences to see and understand.

Here are some of the issues that Season 2 of Transparent covered wonderfully: [Spoilers ahead.]

Transparent has been celebrated for bringing trans issues to the forefront of conversation. However, having cisgender writers as well as a cis man playing the lead transgender character was definitely limiting them in this regard. But, in this season, the show saw plenty of trans characters played by trans actors, like transgender model Hari Nef who joined the show as Gittel. Additionally, Soloway took on more trans people to fill creative and production roles for the show. This includes Transparent 's first trans director, Silas Howard, as well as the show's first trans writer, Our Lady J.

“Having trans writers and directors is important,” Soloway said during the Television Critics Association press tour this summer. “Trans people want to tell their own stories.” With more trans people behind the making of Transparent, this season is informed by actual trans perspectives and experiences.

2. The Challenges Of Transitioning

One of the ways this more informed perspective played out on the show is in Maura's internal conflict about whether or not to start hormone therapy or undergo gender reassignment surgery. She visited her doctor in Episode 4, where she learned that the same hormones that would help her on her path toward womanhood would also make sex difficult and not as pleasurable.

Gender reassignment surgery, which some feel is necessary for their personal journey, can come with many complications and sacrifices. Transparent did a great job at depicting some of the dilemmas that trans people (specifically those looking to transition) face in making these decisions.

3. Coming Out To Your Parents

The topic of coming out was thoroughly explored in Season 1, which was when Maura had first started coming out to the people in her life. Episode 1 of Season 2 immediately touched on the sensitivity surrounding the specific issue of coming out as trans to your parents.

Maura's sister showed up to her daughter Sarah's wedding unexpectedly, and Maura mentioned to her that she would like to see her mother soon, after 30 years of not speaking to her. However, this statement was not met kindly, with her sister begging her to let their mother die without her having to see Maura presenting as a woman (ironically, we find out later that Maura's mother had a trans sister).

Wanting to explain your identity to others, but being held back by the fear of hurting them by doing so, is captured beautifully by practically every episode of Transparent so far. After all, with so many people in our lives and with evolving identities, coming out can be a long and repetitive process, and Transparent captured that.

4. Fluidity Of Gender And Sexuality

Ali (played by Gaby Hoffmann) is possibly my favorite character on the show, since she so accurately and honestly demonstrates the struggle of understanding a fluid identity. By Season 2, Ali was presenting masculinely most of the time, and was discovering her attraction to women. She got into a relationship with her friend Syd (played by Carrie Brownstein), who loved her on the DL for quite some time, while struggling with the idea of commitment. By the end of the season, she was single again and presenting quite femininely.

Her character is relatable to so many other people who feel that their identity is just as fluid, and are struggling to figure it out. And, the patience and confidence with which she navigated these difficulties is completely inspiring to others like her.

5. The Limits Of Being Politically Correct

As in the first season, this season continued to document Maura's journey in understanding what is and isn't polite to say in trans circles, and is an honest portrayal of the learning curve anyone who recently came out goes through. For example, in Episode 3, Maura asked her friend (a trans woman) if she has a vagina, not understanding that the question is inappropriate and invasive. She still has a ways to go before she can truly understand the ins and outs of being trans and politically correct.

On the other hand, her son Josh had an emotional conversation with Shelley's new boyfriend, Buzz, about his feelings about Maura. Buzz suggested that parts of Josh's emotional turmoil at this point could stem from the fact that he hasn't processed the mourning of his father since coming out as a trans woman. He then asked Josh if he misses his father.

“Well it’s like, politically incorrect to say you miss someone who has transitioned,” Josh replied.

“This isn’t about correct, Joshua," Buzz said, before Josh tearfully collapsed into his arms. "This is about grieving, mourning.”

When processing emotion, political correctness is not always entirely useful. This scene demonstrates the struggle family members of trans people experience, regardless of the fact that some of these feelings come from not-so-PC ideas. They are still valid and need to be worked through.

6. Doing What's Right For Yourself Despite Its Effect On Others

This is arguably one of the most difficult things we need to learn as humans. Personally, I've always had a problem with prioritizing taking care of myself over pleasing others. The characters of Transparent bravely demonstrate that self care can and should come first.

In the first episode, Sarah called off her wedding as she realizes (at an admittedly inopportune moment) that she is no longer happy with her fiancee, Tammy. Her whole family supported her in this last minute decision, without any anger or shaming.

Ali's difficulty with commitment and her goal to be true to herself led her to break it off with Syd and experiment with other people. And, Josh didn't try to win back the Rabbi Raquel (played by Kathryn Hahn) when he realized that they both want very different things out of life, despite his fear of being alone. Once again, no one judged either of their choices (with the exception of Shelley's embarrassing overreaction to Josh's breakup at the family's Yom Kippur gathering).

Some of these decisions may seem selfish or unfair, but the family's lack of hesitance in prioritizing their own mental health is a lovely thing to see. Additionally, the complete lack of judgment among the siblings of Transparent is a refreshing look at a family dynamic, even if it may be "dysfunctional."

In Episode 8, Sarah and Ali invited a depressed Maura to come along with them to The Idlywild Wimmin's Music Festival, a mountainous safe space for women to enjoy music and other recreational activities with or without clothing. Maura was enjoying herself until the community's transphobia became apparent as she waited in line for the bathroom. When a group of men approached to clean out the porta-potties, the women in line began to chant "man on the land," warning the others that people assigned male at birth were present. Maura is horrified.

The conversation that followed, between Maura and Leslie and her friends, is extremely telling of the transmisogyny that exists in feminist circles. The women informed her of the festival's "women-born-women" policy, and explained that the festival was only for people who were born with "a vagina and a uterus." They told Maura that her penis was triggering for victims of rape, and that she didn't belong in a female-only space because of her male privilege (referring to the years she lived as a man). Maura eloquently responded to this with, "I was in way too much pain to experience what you're calling privilege." The reality is, of course, that trans women are about four times more likely to be sexually assaulted than the general population. And, trans women don't have or use male privilege because they are not male.

As someone who is both on the trans spectrum and who identifies as a feminist, I can attest to the fact that this conversation excellently captures the frustrating divide between transmisogynists and trans people in feminist spaces. By setting the episode at a trans-exclusionary women's festival, the ugly reality of cis women sometimes feeling threatened by the presence of trans women (or any feminine person assigned male at birth) is brought to light.

Season 2 did an excellent job of bringing attention to these important issues, while involving actual trans people both in front of and behind the camera. With these improvements made, I can't wait to see what Season 3 brings, and I can only hope it will air in an even more accepting and understanding society.