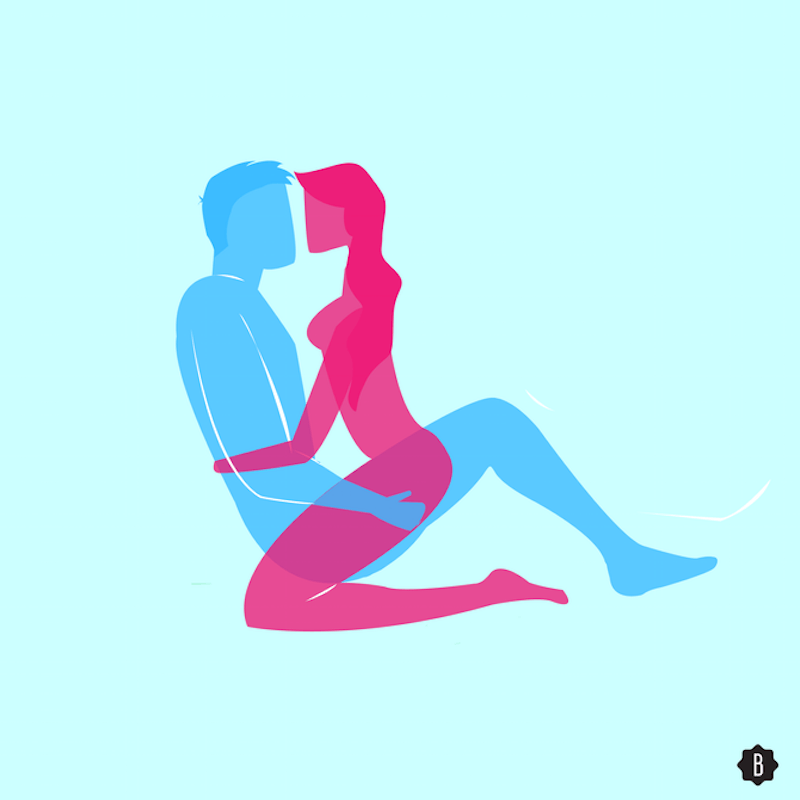 "Are there sex positions that are good for your health?" my friend asked. "Or are there just some that are least prone to kill you?" We laughed, though is true that sex-related injuries are pretty common. To be honest, I had no idea — what would a sex position that is also super healthy and good for you even look like? Would it be super difficult? Would there be acrobatics involved? How would you know if it was working? I wasn't really sure what positions could qualify as being beneficial to one's health, so I asked a relationship expert, psychologist Nikki Martinez, to weigh in about the healthiest sex positions.

"There are a number of positions that are considered to double as exercise," Martinez tells Bustle. By exercising during sex, you wind up working your core, which means that you're focusing in on our cardiovascular health, however inadvertently that may be. Score. This makes sense: It's never a bad idea to up your cardiovascular health game, and if you can do it with a partner, all the better. Below, Martinez revealed four top-notch sex positions that are good for your health. Keep in mind, these positions work with two women as well.

Being on top is where it's at, says Martinez. "The cardiovascular system and core get worked with the women on top. [You're] going up and down, holding [yourself] up. [You're] working all sorts of areas of muscles." Stamina helps here: If you keep moving, you'll get your "heart rate to the rate for workouts," Martinez says. Don't stop, indeed.

This position is great for your core, Martinez says. And you don't have to think about it too much: "We naturally tighten the core in this position — it is almost a natural reaction — so the core gets that workout," she says. So doggy style is a no-brainer sex position that doubles as exercise. Word.

"What we call lotus style has physical and exercise benefits for both, due to both being so consistently active," says Martinez. Though it has been billed as a great morning sex position, lotus is not for the faint of heart: "There is a lot of up and down motion to maintain balance and stability," says Martinez. "Again, we are looking at that core," she says. Lotus tones the muscles, and is a cardio workout as well, she says. "The Lotus is very similar to woman on top, except the couple is slightly more intertwined with each other."

Martinez bills this position as one of the best. One particularly nice health benefit of the lunge position: flexibility. With your knees up, you're on top of your partner, pushing back and forth and moving up and down while simultaneously holding yourself up. "[It's] a great test of flexibility, not to mention strength and balance as well," says Martinez. Lunges boasts many different "systems used" at once, so it's best for muscle fitness flexibility, and cardiovascular health, she says.