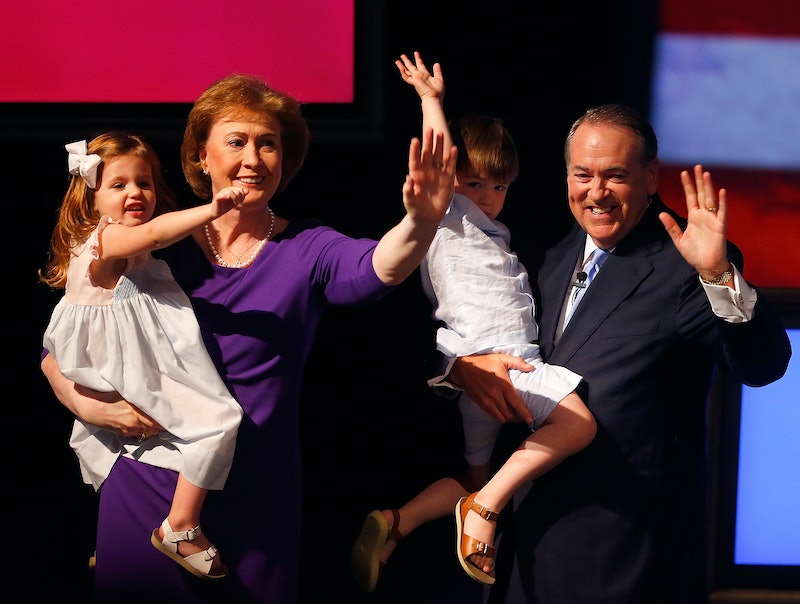 It is no secret that this year's crop of Republican candidates are all various shades of bad when it comes to women's issues, but even worse than that, they mostly aren't even talking about women — unless it's a woman they're related to. As revealed by Mother Jones in their supercut of presidential candidates talking about women, it seems that the only women they care about are the ones they're related to. Well, that is, unless the candidate in question is Carly Fiorina. She might not be that great on women's issues, either, but at least she seems to be aware that women who aren't related to her exist.

Of course, the candidates have had to talk about women's issues and presumably are aware that they are supposed to care about women who aren't their wives, mothers, or grandmothers. And yet the debates have so far not focused much on women's issues, and when they come up, the candidates have tended to pivot sharply towards the women in their own families. The obliviousness is so strong that when asked what woman they thought should be on the $10 bill, two of them named women they're related to. Because I guess Mike Huckabee's wife is more deserving of a spot on the ten than Rosa Parks or Eleanor Roosevelt?

We still have roughly 11 months left until the presidential elections, which means there are plenty more opportunities for presidential hopefuls to keep using the women in their lives as rhetorical devices to make their points about other issues or an opportunity for a sexist joke, and to keep saying things that are incredible insulting to half the country. And if this video is any indication, we'll all be hearing a lot in the coming months about the only women they seem to care about at all — their wives, mothers, and grandmothers.

Based on the Mother Jones analysis of the first four Republican primary debates, here's what it looks like when the GOP candidates talk about women.

To be fair, mentioning your wife when introducing yourself is pretty unobjectionable.

OK, it's a little less standard to talk about "explaining" things to your wife during an economic question.

Wait, why is your wife going on my money now?

And why is your mother on my money?

Not sure why this is coming up, but whatever.

And we're back to wives. But I like this one, because Trump basically accused Bush of potentially listening to his wife about something substantial, and as we all know that isn't OK (except that, y'know, it's more than OK; in fact, listening to your spouse is kind of a requirement for being a good partner). Women are supposed to be rhetorical devices, damn it! They're not supposed to shape your thinking in any way! The two resolved the issue by agreeing that Bush's wife is "lovely," thereby relegating her to safe, set-piece status once more.

Carly Fiorina had probably the best line of the whole CNN debate. When asked about Donald Trump's comments calling her unattractive, Fiorina replied, "I think women all over this country heard very clearly what Mr. Trump said."

Hey, her issue profile isn't my cup of tea, but it's nice that someone has noticed there are women all over this country, not just the ones you see at home or during the holidays.