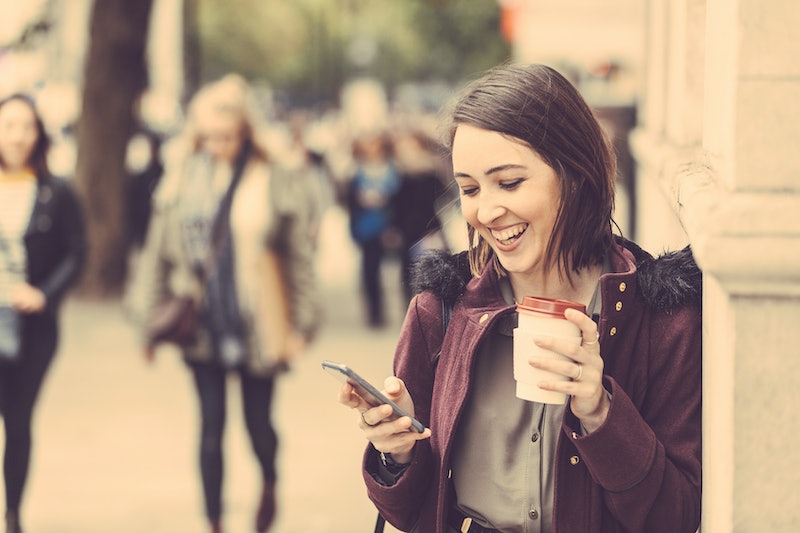 Come 2016, the dating app Clover is about to revolutionize the mobile dating industry with Mixers. Basically, it’s like if Meetup and Reddit merged — only, with a dating focus. The way it works is, Clover sends out various ideas, like “Snowboarding” or “Game of Thrones Night!” and then users respond if they’re in or out. With Clover’s Mixer idea, it’s a group chat that looks like a Meetup RSVP and is based on mutual interests. Obvs, you don’t have to go if Game of Thrones is not your thing (but who isn’t into it?!).

So, in essence, Clover is playing matchmaker — and we could all use one of those, right? — and coming up with an event idea for you (and you can suggest things, too!). Once you attend, the rest of the night is up to you. I only hope an equal-ish number of dating prospects show up. I know with some Match Stir events I attended in Los Angeles, there would sometimes be way more men than women, so I ended up befriending the latter more than connecting with any of the guys.

The Clover Mixer concept reminds me a lot of How About We, the dating app where you pair up with people based on mutual date interests; you suggest a date, then users respond and, if you’re interested in them, that’s what you do for the date. Only, with How About We, it’s not in a group text format.

“Mixers adds a layer of fun not typically seen with other dating services, meeting someone in a Mixer is a lot like meeting someone at a friend’s party,” says Isaac Raichyk, CEO of Clover in a press release. “People are tired of having to use multiple dating apps to get results and there are so many gimmicky niche upstarts trying to differentiate themselves by restricting the user experience. Our goal is to connect singles worldwide with a simple unlimited all-in-one dating experience.”

In case you’re not up on what Clover is, it’s as simple as Tinder as far as browsing profiles is concerned and users are matched based on Clover's algorithm. But, unlike Tinder, Clover sets you up on a date with those matches, so you don’t get stuck in endless swipe land. Their tagline is: “Swipe less, date more.” Yep, they’ll set you up and suggest places based on popularity and price, and you and your date confirm the place and time. It’s dating on-demand. “The simplicity of Tinder with the science of Match.com,” the Metro News said. Not only is it generating more revenue than all post-Tinder dating apps, but Apple rated Clover the “Best New App.” Impressive!

Here’s everything you need to know about Clover’s Mixers:

1. Mixers Can Be Used To Host Offline Singles Events And Virtual Meetups

Mixer events can be anything from rooftop parties to snowboarding — depending on the climate you live in, of course. But, there’s bound to be an idea that interests you, so start swiping and joining activities today.

2. Users Can Come Up With Mixers On Any Topics They Choose

Cards Against Humanity, anyone? Yes, you can choose the topic of a Mixer if you don't see any that look enticing. In the past, I went to some Match Stir events (read: mixers) in LA, like Game Night Happy Hours, though they chose the event, and they were not held on-demand like Clover’s idea. OkC, too, announces and emails events to its users, like this New Year Cheer at Happy Hour one on Jan. 5 in New York. So, Clover letting users suggest ideas is genius.

3. Users Can Browse And Join Mixers In Their Area — And Also Invite Others

The more, the merrier, right? Sometimes, these types of events are easier if we bring a friend or two along, so spread the word!

This is a very cool feature that adds a new layer of fun of the events. And, excitement is contagious — so if we see that others are into an event, it'll probably make us more likely to get into it, too. It's always great to get others' feedback, especially instant feedback via texting and comments.

Once again, why not tell your fellow single friends about the cool Clover Mixer this weekend? Especially since, these days, online and app dating are so the norm that there's no shame in cross-promoting their events across social media.

As a result of the Clover Mixers, users are bound to meet a bunch of people who share their love of Tyrion from Game of Thrones or obsession with Cards Against Humanity, then decide which person — or people — to see again in a one-on-one dating setting.

Mixers will be available in the beginning of 2016, in the upcoming version 5.0 of the Clover app. I was going to say that’s not soon enough, but 2016 is right around the corner, like it or not! So, why not add “Try Clover Mixers” to your list of resolutions?

More like this
9 Alternatives To The 3-Day Texting Rule In Dating
By Ginny Hogan
How To Use The Crying Filter On Snapchat, TikTok, Instagram & More
By Emma Carey
The True Meaning Behind Each Hand Emoji
By Bustle Editors and Emma Carey
TikTok’s “5-9 Routine” Trend Is Here To Boost Your Productivity
By Courtney Young
Get Even More From Bustle — Sign Up For The Newsletter