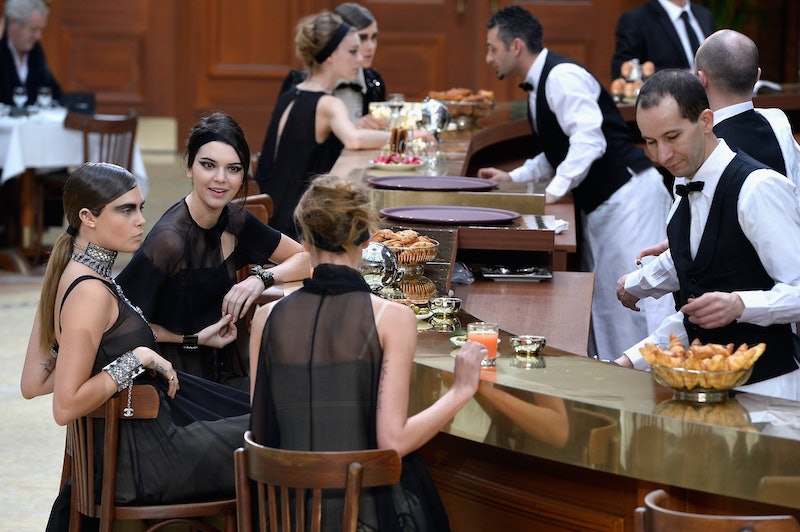 Well, no surprises here: Kendall Jenner tops the list of 2015's Most Reblogged Models, according to Tumblr Year in Review. The 20-year-old beauty edged out her closest friends like Cara Delevingne and Gigi Hadid, who ranked No. 2 and 3 on the annual list. Jenner's ranking definitely shows the impact that social media has not only in the modeling world, but the fashion industry in general.

After a hugely successful year as a reality TV star-turned-fashion model, Jenner owned not only the runways of Chanel, Givenchy, and Marc Jacobs, but also landing a major beauty contract with Estee Lauder. On top of that, she also launched a mobile app along with her sisters and made her debut on the Victoria's Secret Fashion Show catwalk last month. And then there's her family's reality show, the Kendall and Kylie for Topshop line, and having the most liked Instagram photo of all time.

Jenner's not the only model to make waves in 2015. Joining her on the list are other social media moneymakers, supermodels who continue to rule the runways, and models who have turned their attention to acting. Here's hoping though that next year's list will include a more diverse group, including plus size models and gender capitalists like Rain Dove who are redefining the standards of beauty.

Check out the top 10 most popular models of the year and why they made the cut.

It was a memorable year for the Illinois native, who was named of the new Victoria's Secret Angels in 2015.

Dunn made history last year as the first black British model to make Forbes' list of top-earning models, and followed that feat in 2015 by winning her second British Fashion Award for Model of the Year.

The fashion icon continued to grace the covers of fashion magazines all over the world, as well as fronting campaigns for Burberry and Rimmel London.

The supermodel extraordinaire turned her focus to acting this year, with memorable roles on Empire and American Horror Story: Coven.

The South African beauty continued to slay, both as a high fashion model and a Victoria's Secret Angel, but she also let her voice be heard after the senseless killing of Cecil the Lion earlier this year.

As one of the top members (if not the top) of Taylor Swift's squad, Kloss also launched her successful YouTube channel Klossy this year.

Another Instagram success story like her BFF Jenner, Hadid also made her Victoria's Secret Fashion Show debut this year and was just named Global Brand Ambassador for Tommy Hilfiger. I predict she'll be on top of this list in 2016.

Will she make a modeling comeback? Who knows for sure, but Delevingne is arguably the most badass model to appear on this list (with all due respect, Naomi).

Jenner credits her family, most especially her "momager" Kris Jenner for helping her reach the top of the modeling world. "I love knowing that she’ll always be there for me whenever (or wherever!) I need her," she said. "I love her."

More like this
Kylie Jenner Roasts Kendall For Her Cucumber Cutting Skills On TikTok
By Jake Viswanath
The Best Looks From Kourtney & Travis’ Wedding
By Dominique Norman
Kate Had A Solution When Tom Cruise Broke This Royal Rule At The 'Top Gun' Premiere
By Frances Stewart
What Are "Gym Lips" & Why Is BeautyTok So Obsessed With Them?
By Olivia Rose Ferreiro
Get Even More From Bustle — Sign Up For The Newsletter