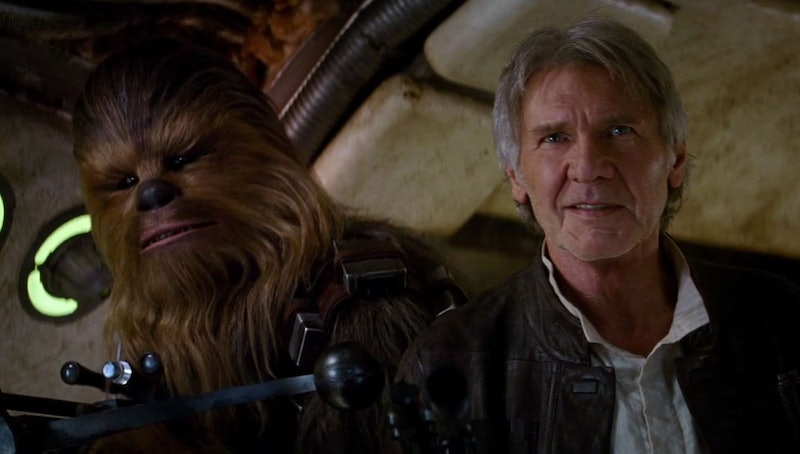 Today — and all of the days, actually — is the best day ever to be a Star Wars fan. Why? Because Star Wars has a plan — a plan for total world domination, that (thankfully) is all happening relatively soon. That's right: The Star Wars universe is expanding at unparalleled speeds, and will presumably continue to do so. Take for instance, part one of the next Star Wars installment — an allegedly three-part anthology series — Rogue One: A Star Wars Story. But, as a devoted fan, you might be wondering who in Han Solo's name will be involved in Rogue One. And, furthermore, will any characters from Star Wars: The Force Awakens be in Rogue One?

I for one need answers. I need to know more about this far, far away anthological galaxy.

SThe Gareth Edwards-directed Rogue One will follow a group of "rebels" who embark "on a mission to steal the plans for the Death Star," according to its IMDb page. The upcoming series already boasts an impressive cast (Felicity Jones, Forest Whitaker, Alan Tudyk, and Mads Mikkelsen to name a few), but there's something missing. That is, more information on which characters from The Force Awakens will be in the anthology's first installment.

But, there could be a good reason for this.

Rogue One is set during the Age of the Empire, between Star Wars: Episode III Revenge of the Sith and Star Wars: Episode IV A New Hope. Knowing that, we can theorize who will not be a part of Rogue One: For instance, characters like Kylo Ren and Rey probably won't be in Rogue One since, well, they didn't exist yet.

As for possible appearances, there's one major clue we should all be discussing. If you remember correctly, the Death Star plan thievery was referenced in the opening crawl of Episode IV. The text read, "During the battle, Rebel spies managed to steal secret plans."

Aha! That sounds familiar to the plot of Rogue One, doesn't it? The opening scenes of Episode IV reveal the aftermath, with Princess Leia discussing the Rebel Alliance's plan. Ultimately, the Death Star was destroyed in Episode IV, after Leia, Luke Skywalker, Han Solo, Chewbacca, C-3PO, and R2-D2 delivered said plans to the Rebellion.

With this information, I think we can conclude that Princess Leia, Skywalker, Hans Solo, Chewbacca, and the droids could have a part in Rogue One. Of course, the actors' ages have to be taken into consideration — but I could see the film at least referencing them if an appearance is impossible due to, you know, time.

So far though, any character crossover between The Force Awakens and Rogue One hasn't been confirmed. I guess we'll just have to be patient. Or something? (I don't know because I'm not familiar with that idea. Especially when it comes to Star Wars.)