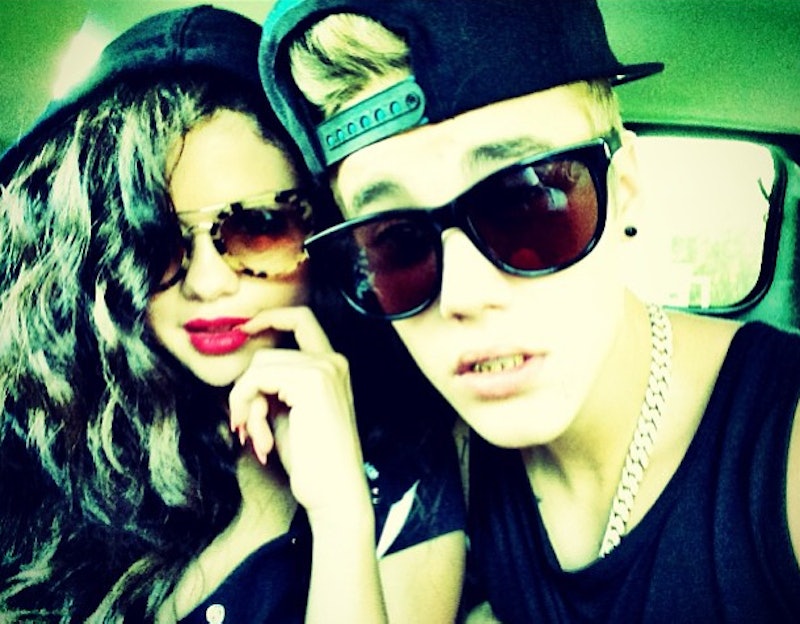 Just two weeks after Selena Gomez and Justin Bieber were, reportedly, back together it seems now that's, reportedly, not the case. "But how could that be? We just saw them riding segways together and cuddling on Instagram!" you're saying. Well, if recently released texts between Justin Bieber and Selena Gomez are real, then it sounds like they're definitely not dating. The problem is, the texts might not be real because unless Bieber or Gomez hold their cell phone up to your face and say, "See, these are the texts," we have no way of knowing. So, in order to figure out what to believe, we have to act as a jury of sorts. We'll take a deeper look at the information at hand then decide on what's really the truth.

The conversation starts with Bieber begging Gomez to get back together with him, or at least to come over and chill while he drinks sizzurp or whatever.

Justin: Baby come on. I love you.Selena: I don't buy that bullshit anymoreI was honest with you and I gave you a second chanceAll my friends were right. You're such an assholeJustin: You're all I need right now. I know I can make it right with you.

Verdict: Texts are real. Justin Bieber definitely seems like he wouldn't be above begging via text message.

Throughout the conversation, Bieber spells words out fully while Gomez is the one that uses abbrevs. As one Jezebel commenter named midwesternmom pointed out, "I call fake. I cannot believe that Beiber would use the correct form of you're, and not just UR."

Verdict: Texts are fake. Really? Justin Bieber would repeatedly use correct spelling and punctuation in text messages. I don't think so.

Justin: Come on. Don't tell me you don't miss this [Insert photo of erect penis]Selena: Stop itYou need to listen to scooter and go to rehab. U r sick.Justin: Rehab? Fuck that! I make that fucker so much money.Cum on baby. [Insert photo of penis]

Verdict: Texts are real. Justin Bieber loves selfies, probs loves his own wang, and would almost definitely find that particular spelling of "come" appropriate in this situation.

A lot has been going on with Bieber recently between the egg throwing, his friend Lil Za getting arrested at his house, and his home being raided. Bieber knows about it, Gomez knows about it, but people reading the text conversation might not which means a recap might be necessary.

Selena: Why r u sending these to me. We r doneAnd how can you let za take the fall for your actionsU need to grow the fuck upI hope you get jail time. U deserve it at this point

Verdict: Texts are fake. Whoever wrote them worked in as much information as possible. There's even mention of a girl named "Kristina" at the end who Gomez says she knows about. Cliffhanger!

Justin: Can't hear you over my cash, babe! You're only famous cuz of me. You know it. I know it. Everybody knows. Bye.

Justin: Nah. Go fuck someone else. Keep that talentless pussy away from me!

Verdict: Texts are fake. While it seems probable that Bieber would use the word "babe," he likely couldn't have thought up even insults as simple as "Can't hear you over my cash" and "talentless pussy" while in a haze of marijuana and codeine.

Exhibit F: Where The Texts Came From

Verdict: Could go either way. Why would Gomez' phone be registered under her stepfather's name? Why would someone in Bieber's circle turn on him and do so in this way? No one knows.

In conclusion, it looks like the conversation is more likely fake than real. Maybe Selena Gomez should come forward and comment on the texts. They make her look awesome.