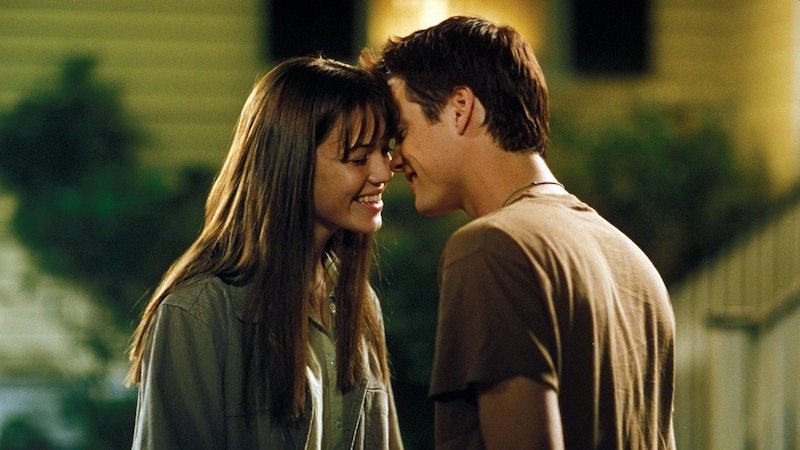 Many authors don't admit where their book inspiration comes from (or, that it is simply a product of their imagination), but there are some writers that have revealed the real people behind their fictional characters. As a writer myself, I am always looking for inspiration within the people I know intimately, as well as the complete strangers I pass by on the streets. And as a reader, I'm constantly wondering where authors come up with their wacky, inspiring, and fascinating characters.

The beloved Flannery O’Connor once said, “Nothing needs to happen to a writer’s life after they are 20. By then they’ve experienced more than enough to last their creative life.” This quote has always intrigued me, mostly due to the fact that I often write and read about characters 20-years-old or younger. Between childhood and adolescence, there are so many emotions, experiences, and overwhelming thoughts that it's no wonder why the young adult market is booming. It's a genre we can all relate to in personal ways, one that is inspired by the constantly changing teenager, real or not real.

So if you're begging to know if there is a real person behind characters like Hermione Granger and Hazel Grace Lancaster, look no further. Here are 9 YA characters that are all based on real-life people:

1. Tintin from The Adventures of Tintin by Hergé

The well-loved traveler Tintin was certainly inspired by someone. Most believe the ginger-haired spirit was inspired by a 15-year-old boy scout and car salesman named Palle Huld who traveled around the world in 44 days. Others insist he's based off of the photojournalist, Robert Sexe, who rode a motorbike like Tintin. Either way, Hergé was inspired enough to write one of the best comic series of all time, and for that, we can be incredibly grateful to both Huld and Sexe.

2. Hazel Grace Lancaster from The Fault in Our Stars by John Green

One of Green's good friends, Esther Earl, and who also fought thyroid cancer, inspired Hazel Grace Lancaster from The Fault in Our Stars. "And her charm and snark inspired the novel, as did her idea of incorporating an author she liked into her Wish" Green wrote on his blog. After meeting through a Harry Potter conference in 2009, Green became close with Earl, and after her death, his powerful emotions and thoughts helped write the book we all still weep over.

3. Hermione Granger from the Harry Potter series by J.K. Rowling

It's no secret that the beloved Hermione Granger is based on the one and only J.K. Rowling in her teenage years. They're both obsessed with books and have a talent for being amazing leaders. And as we have learned from Twitter, too, Rowling had the same amount of sass and wit as Hermione.

Twain mentions that Finn is based off of his childhood friend, Tom Blankenship, in an autobiography. With some ignorance, a good heart, and an independent spirit, Blankenship made for a character Twain couldn't help but write about.

5. Sydney and Ames from Saint Anything by Sarah Dessen

The creepy relationship between Sydney and Ames actually stemmed from Dessen's own personal experience as a teenager. After falling for an older guy and into a relationship centered around the need for attention, Dessen has mentioned how tough writing those scenes were for her. Dessen wanted to write about the attention we all feel we lack as adolescents, and shines a light on the topic of unhealthy relationships.

6. Jamie Sullivan from A Walk To Remember by Nicolas Sparks

Jamie Sullivan was based on Sparks' younger sister. Similar to Jamie, his sister had a strong faith in the church and wasn't exactly the popular girl at school. She also developed cancer at an early age, and met a boy like Landon who at first couldn't picture marrying her but, in the end, couldn't imagine doing anything else. Sparks also recalls that this was the only book he cried while writing, and having a personal connection like that, I can definitely understand why.

7. Susie Salmon from The Lovely Bones by Alice Sebold

Although no one would ever wish for Susie Salmon's character to be inspired by real events, it is based on a young girl's murder in Norristown, Pennsylvania in the 1970s. Seabold herself was a victim of rape during her first semester of college, and she took a creative writing course that coaxed her into writing about what had happened. Sebold is one courageous, talented writer — one that revealed the fears young women face on a daily basis and shared it through Susie Salmon.

Growing up just a few doors down from Rowling and sharing the same last name, Ian Potter was an inspiration source for The Boy Who Lived. As children, Ian was always playing tricks on his sister and Rowling, as well as the other kids on the street. Playing games that involved witches and wizards, it's not shocking to learn that Rowling found inspiration in her childhood friends. And as for Ian's last name, Potter, it was just something Rowling had always liked.

9. Margaret from Are You There God? It's Me, Margaret by Judy Blume

Like Margaret, we were all clueless as to how our bodies worked and begged for answers wherever we could find them during our awkward teenage years. Blume's words were a saving grace, and came from an honesty she herself knew all too well. While Margaret's story is pure imagination, Blume does reveal she has more than a few things in common with Margaret, including lying about getting her period, stuffing her bra, and wanting her classmates to like her as a young girl.