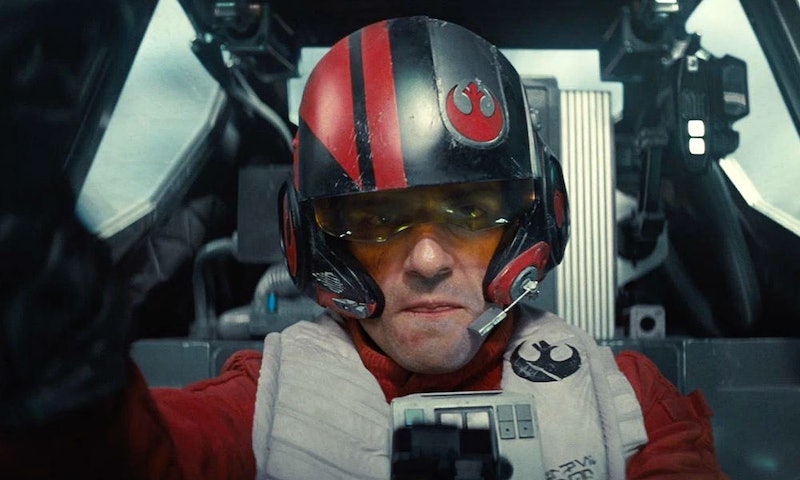 By now, everyone in the galaxy has seen Star Wars: The Force Awakens. Literally everyone — the movie has already made over a billion dollars in record time. A big reason for its success? The presence of Oscar Isaac in The Force Awakens. Don't get me wrong, everyone in the film's cast absolutely kills it. Daisy Ridley as Rey is an incredibly strong protagonist for whom everyone can root. John Boyega's Finn provides the comic relief while also almost standing in for a member of the audience sucked into the film. Adam Driver brings a completely unexpected tortured angst to the short-fused and powerful villain Kylo Ren that works way better than it should. And of course, Harrison Ford as Han Solo is just that: Harrison Ford as Han Solo. But Isaac's fighter pilot, Poe Dameron, was the character I felt myself wishing I had seen more of once the credits rolled.

Dameron is just cool. I feel like a bit of an idiot for writing that, but it's true. I know that in 2015 I'm not supposed to fall into the trope of rooting for the handsome, unflappable, traditional hero who just happens to be the most talented at what he does, but damn it, I couldn't help it with him. He was magnetic, he was selfless, he was always ready with a witty one-liner, and he could fly an X-Wing like nobody's business. How could I not root for him? So to better illustrate my point that Poe Dameron was where it's at, here are six scenes that prove Oscar Isaac was the best part of The Force Awakens. And it goes without saying, but just in case, spoilers to follow.

When He Mocks Kylo Ren

It doesn't take long for fans to realize that Dameron has taken up Han Solo's mantle as coolest cat in the galaxy. While being painfully brain-tortured by Kylo Ren, Dameron takes a moment to mock how the villain sounds while speaking through his mask. The guy's got ice in his veins.

When He Makes His Daring Escape

We're first introduced to Finn panicking, a recurring theme, when he's aboard a tethered TIE fighter with Dameron attempting to escape from the First Order, but Dameron again keeps cool under pressure. In fact, he seems much more excited about getting the chance to fly a TIE fighter than he does about the prospect of being killed, which nearly happens. He also manages to name Finn here, which is pretty great.

When He Recognizes His Jacket

How great was it to see Finn and Dameron's reunion interrupted when Dameron realizes that Finn is wearing his jacket? What could have been a super awkward moment turned into one of the movie's funniest parts, and also one of its most heartwarming after the fighter pilot tells the reformed Stormtrooper to keep the coat.

When He Reunites With BB-8

The little droid ended up being even more adorable and lovable than advertised, so when he reunites with his owner, Dameron, it's like watching one of those soldier/dog reunion videos. The feels.

When He Pats Finn On The Back

It's a super brief moment, but when the Resistance is preparing to strike back against the First Order and Dameron acknowledges Finn as they pass by one another, well, it's like the coolest kid in high school saying hi to you in the hallway. Finn could have died a happy man there, and the rest of the audience along with him.

When He Kicks Ass As A Pilot

All movie the audience is told what a great pilot Dameron is, and when he finally cuts loose on the Starkiller Base... holy moly. It's one of the most thrilling action scenes in the whole film, and in it Poe Dameron proves that he lives up to the hype.

I really hope Oscar Isaac brings Poe Dameron back in a larger capacity for Episode VIII. With Rey and Finn basically taking the spots of Luke and Leia (sort of), they really need a third wheel to replace Han Solo after losing him in The Force Awakens. And who would be better than Han's spiritual successor, Poe Dameron?