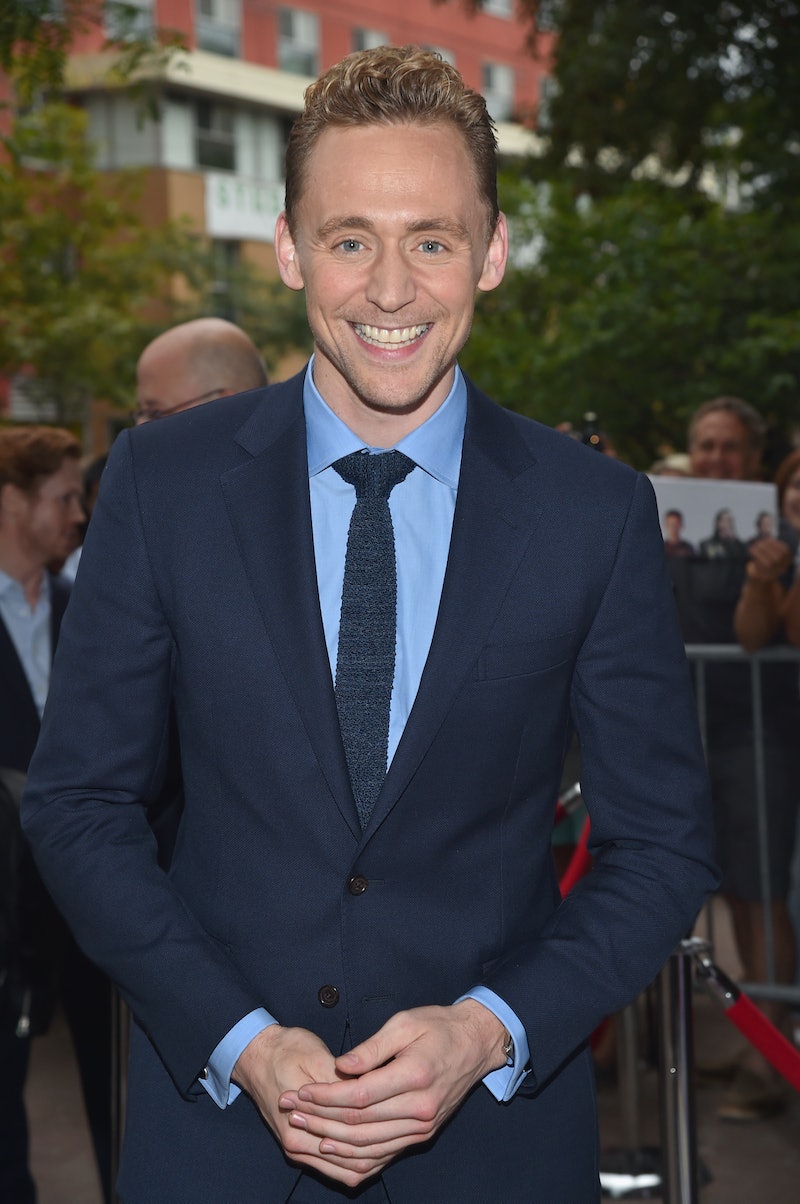 Can you believe 2015 is almost coming to a close? It's been quite the year for famous folks in Hollywood, but especially Tom Hiddleston. Thanks to Crimson Peak, Hiddleston continues to make a name for himself, which he will undoubtedly do in 2016. It's kind of hard to imagine just how the British actor will top 2015. From press tours for I Saw the Light and High-Rise to all the times he did good through charity work to never failing in making his fans swoon and bow down thanks to being ever-so-charming, Hiddleston had a pretty great year. Well, guess what? 2016 will be a big year for Tom Hiddleston, too, and not just because of his acting talents.

Yes, there are future T. Hiddles projects slated for 2016 releases, but there's so much more to the 34-year-old star than his movies, miniseries, singing abilities, and phenomenal dance skills. Like with every new year, most people vow to make the new year even better than the last. Let's face it, that's exactly what Hiddleston does year in and year out. How do I know he'll do just that in 2016? First, how dare you even ask me that. Second, we're dealing with Tom Hiddleston, so of course he'll have not only another successful year, but one that will once again prove just how amazing of an individual he is.

That said, here are a few things to look forward to in 2016. Granted, some might be more wishes instead of surefire occurrences, but as a self-proclaimed Hiddlestoner, I'm allowed to wish and hope.

One day, Hiddlestoners might get to actually see I Saw the Light, the biopic in which Hiddleston plays country singer Hank Williams. Yes, the release date was pushed back to March 25, 2016, but that just means fans have something Hiddleston-related to look forward to in March.

Finally! It's happening. The BBC and AMC miniseries The Night Manager starring Hiddleston (obviously), Hugh Laurie, and Olivia Colman is coming to a TV near you. Even though it's only six episodes, I'm still looking forward to the project's debut in April 2016. It focuses on Hiddleston as MI6 field agent Jonathan Pine who sets out to bring down Laurie's weapons dealer, Richard Roper.

Get ready, Hiddlestoners in the United States, because Hiddleston's High-Rise will appear in theaters sometime in 2016. It was touch and go there for a bit and many worried that the dystopian thriller — also starring Elisabeth Moss, Jeremy Irons, and Sienna Miller — wouldn't even come stateside, but thanks to Magnolia Pictures' Magnet Releasing, it is!

Seeing as Hiddleston is such a hard worker and that he clearly loves what he does, I'm sure there were will be even more projects for fans to fawn over in 2016. I mean, that would just be cruel if there weren't, right?

5. When He Promotes Feminism — Again

It's no secret that Hiddleston is a self-proclaimed feminist. As you can see from the evidence above, he's not afraid to voice his feminist beliefs — not one bit. And it's pretty safe to assume that the actor will continue spreading the word of gender equality in the new year.

6. Another After Hours Segment

First, if you haven't watched the MTV After Hours segment featuring Hiddleston and Jessica Chastain, stop what you're doing and watch it right this second. I'll wait... OK, now that you're back, how fantastic was that? This is the second one Hiddleston has filmed, so here's hoping 2016 brings fans another one that's even more enjoyable.

Seriously, when is Hiddleston going to receive some recognition from either the Hollywood Foreign Press Association (aka the Golden Globe Awards) or the Academy (aka the Oscars)? It's about time he gets some awards love. A statue of gold popcorn from the MTV Movie Awards just isn't enough, if I do say so myself.

Don't get me wrong, David Beckham is one handsome man who does a lot of good, but I was really pulling for Hiddleston as 2015's Sexiest Man Alive. Well, I guess there's always 2016. Who's with me?

Tom, when are you going to release a dance video? It's far from overdue. I need something to boost my workout sessions in 2016. Obviously, a dance video of Hiddleston is the only thing that will make me sweat (and I'm betting it will step up my dance game too).

Seeing as Sherlock Season 4 doesn't begin production until spring 2016 that means there is plenty of time for Hiddleston to guest star alongside his BFF Benedict Cumberbatch. Who doesn't want to see him as the third Holmes brother? Let's keep those fingers crossed.

Hiddleston is one of the most inspiring, motivating, and quote-worthy actors. It's about time a book is created filled with Tom Hiddleston quotes. Not only would it make a great gift, but it would improve anyone's bad day. Get on it, Etsy!

Even though a few of these are definitely happening, here's hoping all 11 items come true, because that would be a Hiddlestoners dream come true.