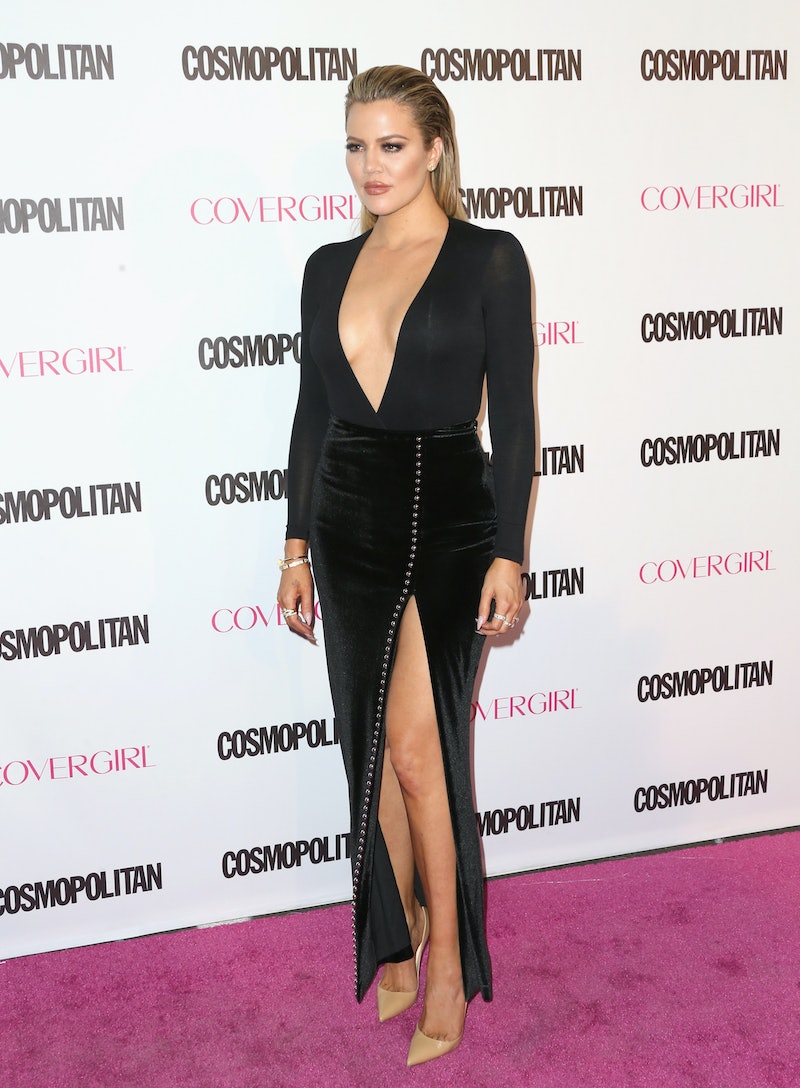 Sweats, tanks, and sneakers. That's pretty much your essential lineup of no frills workout gear, right? It gets the job dunzo and the added bonus is pieces that come in pretty patterns or flattering cuts. Well, Khloe Kardashian's workout clothes are anything but basic, even though her gym ensemble was comprised of the usual basics like sneakers, leggings, and a hoodie. But was she wearing Yeezy Season 1 or 2, which ain't cheap, to... the gym?

Gym clothes are no longer solely valued for their functionality, by Kardashian and pretty much everyone else. Workout wear has forged its own fashion category and defines street style. Kardashian captioned the snap "Yeezy Season," leaving fashion lovers and her followers to wonder if she was wearing Yeezy Season 1 and/or Yeezy Season 2 while working up a sweat!

This L.A. girl also accessorized with a New York Yankees cap, huge hoop earrings, and long, hot pink nails, all of which are impractical while exercising but perfectly acceptable when the goal of athleisure is making a street style statement.

Since the reality star provided no concrete detail about her threads, we can only speculate. No, her sneakers are not black Yeezy Boost 350s, although she probably has a pair or six in all colorways in her kloset.

The white sole with the splash of pink gives away the non-Yeezy Boost 350 status. Her leggings are also stamped with "Koko," which is her nickname. Those appear to be custom. Maybe her black sweatshirt is Yeezy? It's too close to call and the lighting/filter isn't exactly revelatory. Kardashian gave us nothing in the way of context clues, either.

While trolls and haters were quick to criticize Kardashian for wearing '80s style hoops and dagger nails to the gym, who cares! Maybe she had wrapped her workout and was headed out, throwing on earrings before making her exit, which was likely eagerly awaited by the paparazzi and their flashbulbs.

Kardashian is pretty serious about being healthy and is committed to exercising. She often posts pics from a "sweat sesh" and she is usually fabulously attired. While it might not always be a practical ensemble, athleisure needn't be schlubby or scrubby. She's the proof.

Well, at least we know she'll never run out of running shoes...

Koko's workout looks are usually pretty put together and well thought out. That doesn't diminish the regimen or routine! As long as she does her reps, how she dresses is secondary.

Most of her workout gear is black, as you've seen.

Don't hate on Kardashian. It's a waste of time and won't effect how she views herself and it shouldn't!