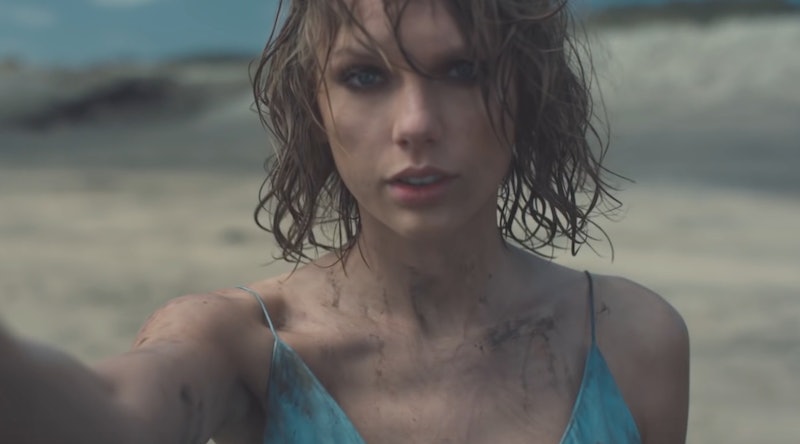 Is change afoot — or "alip!"— for America's Sweetheart? Taylor Swift wears two blue dresses in her "Out of the Woods" video and they are beautiful and elegant. She's the sole star and at the center of the action, battling the elements, like fire and water, and the weather, as well as creatures, like wolves! Why isn't Swift wearing her signature ruby red lipstick in the clip? The video, which has layers upon layers of meaning, has sparked tons of online-generated fan theories about everything from the message behind its vines to the fact that there is no guy in the video.

I'm speculating why Swift, who once facetiously told PEOPLE she wears red lipstick because she thinks "my face looks worse without it," went lipstick-less in this empowering and impactful clip. BTW, Swift is gorgeous with red lips or without because duh. That "face looks worse" stuff is sheer nonsense and is Swift poking fun at herself.

In the "Out of the Woods" video, Swift faces many challenges of nature and she dismantles them one by one. She even does so while barefoot.

Her lips are as bare as her feet. Or are they?

The video is fantastical and reminds me of the Twilight films with its aesthetics. Swift is the heroine, running from wolves who seem out for her blood. In order to infuse the video with some sense of realism, she had to ditch lipstick. Lipstick can wait. It's not like she has a mirror for touchups. Sweat, grime, and the elements take precedence. Lipstick can be applied after she makes it... out of the woods.

Does fire engine red lipstick really go with an ice blue dress? I feel like it would have clashed, spectacularly so, with each of her blue frocks. Perhaps she didn't want any other colors to compete with her blue dresses.

Maybe Swift's lipstick washed away when she plummeted into the ocean? Again, Swift and her team could have been trying to impart some semblance of real life, however minute, in this epic, visually arresting, and fantasy-driven clip.

Is Swift ushering in a new era where she is foregoing her usual and familiar red in favor of a bare-lipped look? I never thought she would chop off her long locks. But that actually happened, so...

5. She Actually Is Wearing Lipstick

Swift might actually be wearing a light lipstick! Look a little more closely. Is she wearing a nude, matte lipstick? Did she somehow manage to snag herself a Kylie Lip Kit? It's entirely possible.

6. She Is Not Defined By Her Makeup

Swift is preternaturally gorgeous. This much is true. She enhances that beauty with makeup. But she is not defined by it. In her quest to be relatable to her fans and to be a feminist icon, she had to ditch elaborate makeup (and even her girl squad) to demonstrate female empowerment in an entirely different way. So there's that.

These are all possible scenarios as to why Taylor Swift didn't wear lipstick in "Out of the Woods." Watch the video below.