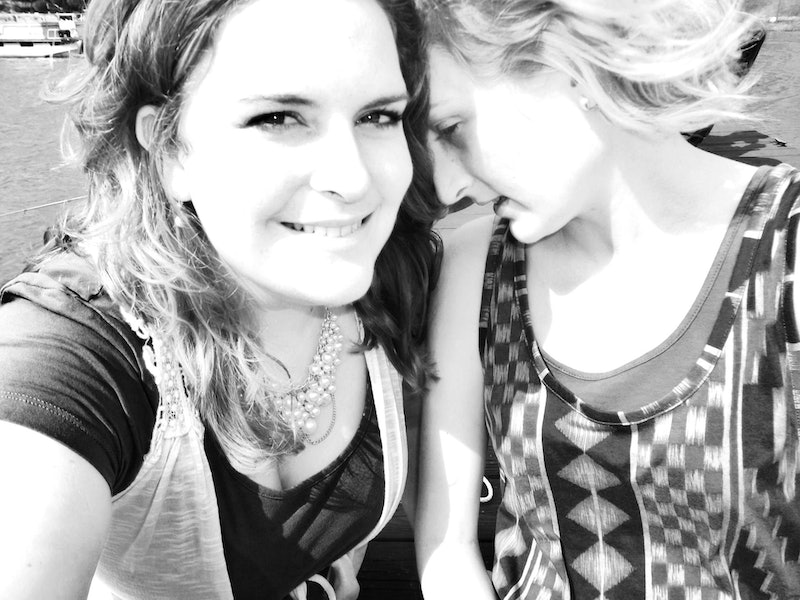 If you're lucky enough to have a sister like I do, then you probably already know that the bond between sisters (especially sisters who mostly get along) is like no other. Having a sister is like having a best friend who you happen to share a ton of genetic material with, and who you know will always have your back — whether you deserve it or not. Of course, I'll be the first to admit that I've taken my sister, and our relationship, for granted at times; but I've never doubted that she's the number one person I'm always happy to see and hear from. If you feel the same way about your sister, then you should probably try to hang out with her as much as possible. In fact, I personally believe there's a lot of fun things all sisters should do together before turning 30.

Everyone's different, so the things that I suggest all sisters should do together before turning 30 may not be the same things that you'd like to experience with your sister in your twenties. That said, as someone who is very close to her older sister despite the fact that we now live over 1,000 miles apart, I highly recommend that you try to do the following 11 things with your sister before the two of you reach 30. That is, if you haven't done them already.

1. Go On A Road Trip Together

My sister and I were fortunate enough to travel most of the continental U.S. together while we were growing up, and since our mutual love of travel has only grown as we've gotten older, taking trips together is kind of one of our things. We came to NYC together the summer after I graduated high school, we cruised to the Bahamas five winters ago, and last spring, we spent a freezing weekend in Chicago.

If you've never traveled with your sister, you should really consider changing that. Whether it's a cross-country road trip or just a weekend trip to a local beerfest in your state, you won't regret it. You probably will lose your temper at some point and then feel really bad about it, (at least, I usually do) but you'll make memories with your sister that can't be replaced.

My sister and I recently got tattoos together, and it was weirdly bonding. If you're planning to get a tattoo, and you know your sister is into getting inked as well, make an appointment to get your tattoos at the same time. Even if you two don't want to get the same exact tattoos, just being there to support each other through the whole process, and then celebrate together when it's over, is an awesome shared experience. Trust me, it'll be way more fun than going by yourself, and it makes for a great story.

3. Go Out Of Your Way To Comfort Each Other After A Breakup

OK, so I've never had the chance to comfort my sister after a breakup, because the first guy she dated happened to be the love of her life. (Adorable, right?) However, she's comforted me many times post-breakup, and it's definitely brought us closer together. In fact, my most recent breakup was so difficult for me that my sister actually drove an hour and a half, with both of her kids in tow, to come stay the night with me in my apartment — and to make sure I had lots and lots of wine, of course.

If you get the chance to comfort your sister after a breakup, or you find yourself in need of comfort post-breakup yourself, then reach out. Take booze (or smoke, if that's her thing) over to her place and let your sister be an emotional wreck with you. She'll probably be really miserable to be around, but she'll appreciate your presence more than you'll ever know. And if you two live far apart, call her, text her, and bombard her Facebook wall with funny memes to make her forget about her ex.

4. Lie To Your Parents For Each Other

I would normally never condone lying, but when it comes to your sister, sometimes lying for each other and having each other's back are synonymous. Since you're not kids anymore, it's time to put your tattle-telling days behind you. So if your parents ever ask why your sister's late for a family brunch, and you know it's because she's hungover AF, feel free to lie for her. (Like you need me to tell you, I know.)

5. Go On A Trip With Your Mutual Friends

That Chicago trip I was talking about earlier? Since my sister and I share some of our friends, we got to invite them to join us while resting in the knowledge that everyone would get along. When you share at least a couple of friends with your sister, it just makes it that much easier to make memories together, and it makes your friendship with your sister that much closer.

6. Find A Signature Drink You Both Love & Get Drunk Together

Unless you have personal beliefs or a health issue that would make this item a bad idea, you should definitely find a drink you and your sister both love and then get drunk on it as often as is healthy. My sister and I have been drunk on blackberry wine together more times than I can even remember, and it's always really fun. Plus, it's just one more little way the two of you will be able to relate to each other.

My sister doesn't dig weed, so I've never smoked with her. But I would if I could, so I'm suggesting it. If you like to smoke, and your sister does, too, then try doing it together! Just be sure to have snacks handy. And lots of water.

8. Get A Couple's Massage

I know it sounds weird, but you don't actually have to be a couple to schedule a couple's massage. And in my experience, couple's massages are cheaper than booking separately. Plus, getting your massages in the same room gives you and your sister more time to chat.

9. Go To A Music Festival Together

Unless you and your sister hate music, you've got to attend a concert or music festival together. The shared experience of meeting awesome, weird, new people, and watching your favorite bands do their thing, is pretty much priceless. Plus, you'll probably still be talking about it 20 years later.

10. Be Honest With Each Other About Relationships

Obviously, don't be a jerk about whoever your sister's dating; but don't hold back too much, either. If you feel like your sister is in an unhealthy relationship, tell her. If I had listened to my sister, I would have gotten out of a bad relationship much sooner. When I did finally take her advice to get out of that relationship, though, part of the reason I felt like I could do it was because I knew she'd support my decision.

If you think your sister's dating someone she shouldn't be dating, it's OK to be honest about it. Just remember to be nice about it, too.

11. Tell Each Other A Major Adult Secret

In my opinion, one of the best things about having a sister is knowing that you have someone to tell your secrets to who will (usually) keep them. I don't think I'm the only woman who tells her sister literally everything, and although my sister is naturally more private than I am, I know she tells me things that she wouldn't tell anyone else.

Unless your sister is just really bad at keeping secrets, tell her everything, let her tell you everything, and then keep all of it between the two of you. You'll strengthen your bond for sure, plus, it's just a really fun thing to do. There's no reason the secrets have to stop just because you don't share a bunk bed anymore.