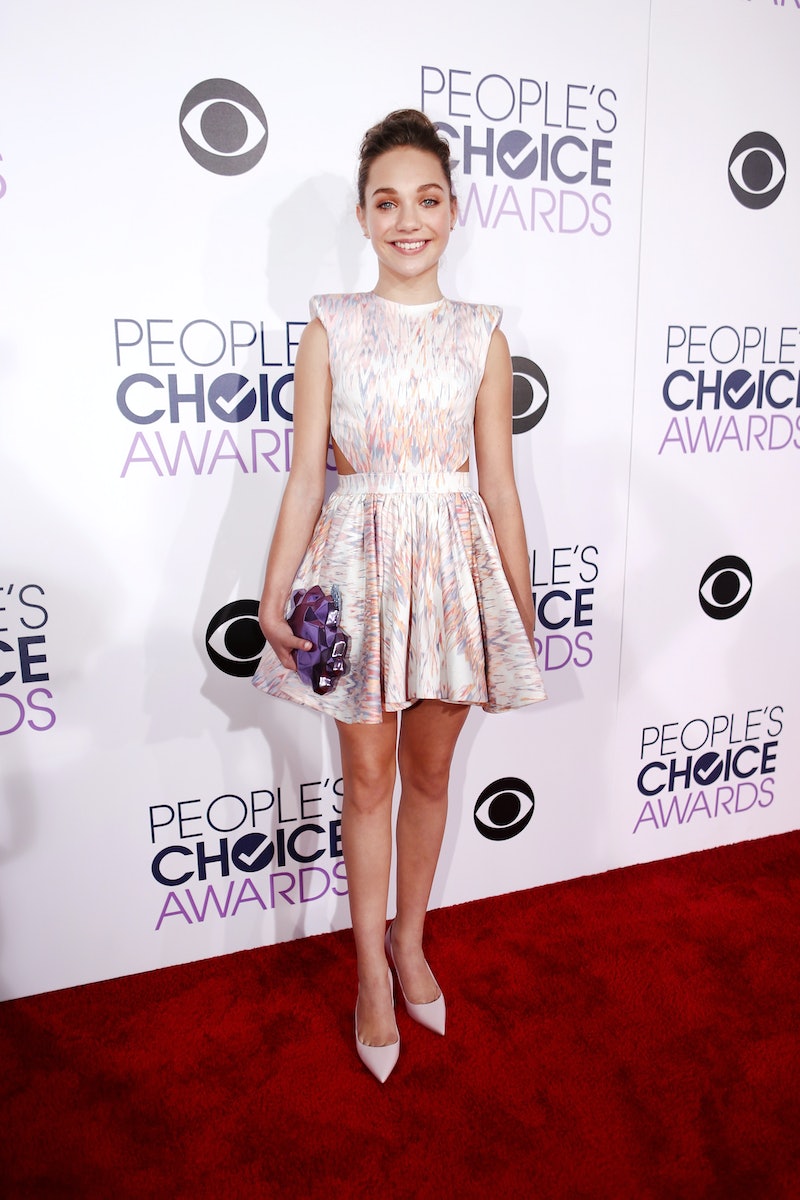 This year's People's Choice Awards have some unexpected new categories, and I have to say, I can't wait to see who wins them. From Favorite Social Media Celebrity to Favorite Social Media Star (what is the difference?!), the categories are definitely taking into account today's obsession with our phones. That's why I was dying when I saw Maddie Ziegler on the 2016 People's Choice Awards red carpet. She looked absolutely adorable!

The 13-year-old star, best known for her role on Lifetime's Dance Moms is up for the "DailyMail.com Seriously Popular award," and she showed up on the red carpet in an adorable white mini dress with cut-outs and awesome pastel accents. She finished off the look with pastel pink pointed-toe pumps, which remind me of an updated take on a classic 1980s look. Ziegler's hair and makeup is almost always flawless, and I love how her ballerina bun, strong brows, and bronze smoky eye don't overpower her dress.

Considering the dancer will compete with Bella Thorne, Kylie Jenner, Cara Delevingne and Ruby Rose, who are all insanely popular, it's going to be tough to pull out a win. But I have a feeling Ziegler's red carpet look might win the category.

I'm loving the fit-and-flare silhouette of Ziegler's dress, which is adorable and age appropriate in my opinion.

And how much do you love that purple clutch? It definitely adds and unexpected element to the look, and I love how she broke old-fashioned rules about matching your bag to your shoes.

I mean, this look is basically perfection. I'm dying over those structural shoulders.

It's no surprise Ziegler was nominated in this category considering she's definitely one of 2015's biggest success stories. From her viral performance in Sia's "Chandelier" video to a cameo on the last season of Pretty Little Liars, Ziegler is definitely proving she has career inspirations beyond Dance Moms, which is why it's no surprise she's rumored to be leaving the show. She's all over magazine covers worldwide, and I have a feeling the star's career is just taking off. And the best part about it? Even more adorable red carpet looks for me to swoon over.

More like this
'The Circle' Season 4 Star Yu Ling Wu Is Already A Beauty Icon
By Erin Stovall
Kourtney Kardashian & Travis Barker’s Italian Wedding Photos Are Finally Here
By Grace Wehniainen
Machine Gun Kelly Wore A $30K Diamond Mani To The BBMAs
By Paris Giles
How To Master Baby Braids, According To TikTok
By Tomi Otekunrin
Get Even More From Bustle — Sign Up For The Newsletter