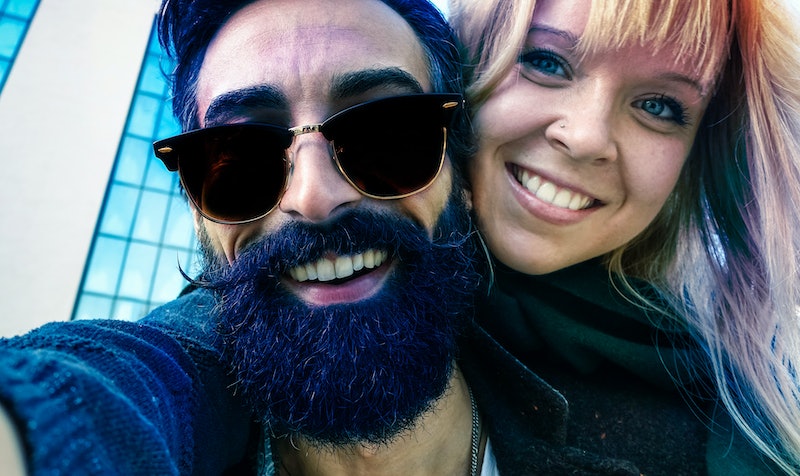 Back in 2013, I realized that I'd been dating the same type of guy over and over again. So, for a while, I started dating people who weren't my type. I had just broken up with my boyfriend of a year and a half. He was an all-American, take-home-to-Mamma kind of guy, but it turned out he wasn't such a keeper. He cheated on me repeatedly and managed to keep it a secret for several months.

While I was wallowing in my post-breakup misery, a friend of mine pulled up my Facebook profile and urged me to look at it objectively. She pointed to the fact that, during the last few years of my life, I had fallen into the habit of dating the same dude over and over again.

"You need to branch out," she instructed. After that, I started dating with variety in mind. First, I dated a vegan schoolteacher with a cat named Tabitha, then an army dude who was briefly stationed in my hometown, and then I dated a breakdancing writer who contributed to feminist-themed websites. Though none of these relationships lasted long, I did learn that dating someone who isn't your type can be really fun and educational.

Here are 22 things that happen when you date someone who isn't your type.

1. You Google Them Before The First Date

You're going to need to find something to talk about over a glass of wine. Who knows, maybe you two were born in the same hospital or went to the same Coldplay concert back in high school. Stranger things have happened, right?

2. You Have An Elaborate Escape Plan Set Up

You're already taking a risk by dating outside of your comfort zone, so it makes sense to set up an easy way out just in case. It's simple, really. If you're anything like me, you'll have a friend call a few minutes into your date with an "emergency," and you can decide whether or not you want to bail.

3. If All Goes Well, Things Are Really GOOD At First

The novelty of dating someone new is enough to get almost anyone going. But if your date's energy is the total opposite of what you're used to, (in a good way) they're obviously interested in you, and they're super cute? Girl, that escape plan will instantly be rendered pointless.

4. Everything They Do Is Foreplay

And I mean everything. Even watching this enigmatic, new stranger flip through a book of Rumi poems will probably make you shiver.

5. You're Fascinated By Their Taste In Things

Dating a type of person you've never dated before means you're going to get introduced to lots of exciting, new things. Maybe your date will turn you on to a list of obscure bands and nature documentaries. Or maybe they'll encourage you to try a new dish. Whatever cool stuff they expose you to, though, you're probably going to find them all the more appealing for it.

6. You Go Back To Your Friends With All These New Interests

You're even more cultured now, so you'll likely want to share all your new interests with your besties — even if they think you're being ridiculous.

7. You Wonder Why You Never Dated This Kind Of Person Before

Fun has been redefined! When you're in that beautiful beginning stage of dating a type of person you've never dated before, you might kick yourself for not branching out of your comfort zone earlier on. I mean, no wonder you haven't found the right person yet. You've basically been looking in all the same places until now.

8. Your Friends Are Extra Nosy

They just can't help themselves, can they? Sure, they've been nosy about your dating life before, but this new type of yours is bound to strike even more curiosity than normal.

9. ...And They Want To Know All The Gory Details

They won't rest until you've gone into great detail. Suddenly, brunch talk is no longer PG-13.

10. You'll Ask Them For More Advice Than Usual

You're going to need the brutally honest counsel of your friends now more than ever, because your head and heart may be sending you conflicting messages.

11. You Get Nervous About Meeting Their Friends For The First Time

This is normal for any new couple, but things are a bit more nerve-wracking here because you and your new boo are so different. The last thing you want is to be that awkward girlfriend who gets brought around a few times before being forgotten forever when things fizzle out.

If your new sweetheart isn't normally your type, chances are you and their friends will be pretty different, too. So you're probably going to catch yourself conducting a few mirror pep talks before you join them for a weekend drink, and that's more than OK.

You struggle enough to get your own friends laughing, let alone a bunch of people who clearly aren't into the same things that you are. Because of this, you might consider filing away a few "safe" jokes or funny stories just in case.

14. You Briefly Consider Wearing Things You Never Normally Would

You're already nervous, so you probably won't want to stand out more than normal. This may mean you'll find yourself temporarily trading in your stilettos for a pair of beat-up Converse, or vice versa.

You go through a whole list of reasons to convince yourself that going shopping is a good idea, that you weren't all that attached to your signature glam/rock style anyway, and maybe, just maybe, you really can learn to love the whole plaid top and boots sort of look.

16. You Feel Foolish For Thinking The Clothes On Your Back Would Get Their Friends To Like You

Yeah, I know, dating sucks sometimes. Feel free to talk to some pizza about it.

17. The Longer You Date, The More You Wonder About Their Meeting Your Parents

Your folks have gotten used to a certain kind of SO coming around, and it was probably hard enough to get them accustomed to that type. So don't be alarmed if you feel slightly anxious about bringing home a whole new type of person for them to adjust to.

Views, beliefs and values, life goals — these are all bound to come up at some point. Maybe the two of you are aligned on them. Perhaps you're on opposite sides of the camp. Wherever you stand, though, this chat will determine which direction your relationship goes.

19. You Learn Which Values You're Not Willing To Budge On

If your differences of opinion run deeper than your taste in music, you'll likely learn how to navigate that conversation gracefully. Plus, you'll start to learn which beliefs you're not willing to back down on.

Just when you thought this whole thing was a waste of time, you see that you've walked away with some pretty valuable lessons. It'll feel good to know you're comfortable speaking up about the things you can't budge on, regardless of what it will do to your budding relationship.

21. You Might Discover That It's Possible For Two People To Be Friends After They've HOOKED UP

Just because you didn't end up happily ever after doesn't mean you can't remain friendly. As long as no hearts were majorly broken, you might find that friendship is your true destiny.

22. You Realize It's Totally OK To Have A Type

You're a grown woman, which means the universe has tested you enough by now for you to know exactly who you like to spend your time with. And there's absolutely nothing wrong with that.

More like this
6 Dating App Tips To Try If You're Looking For A Serious Relationship
By Lexi Inks
Wanna Try Hinge's New Video Prompt Feature? Here Are 7 Tips
By Lexi Inks
Breeding Kinks Have Been On The Rise Since Roe V. Wade Got Overturned
By Lexi Inks
Are Quality Time & Gift-Receiving Love Languages Compatible?
By Lexi Inks
Get Even More From Bustle — Sign Up For The Newsletter