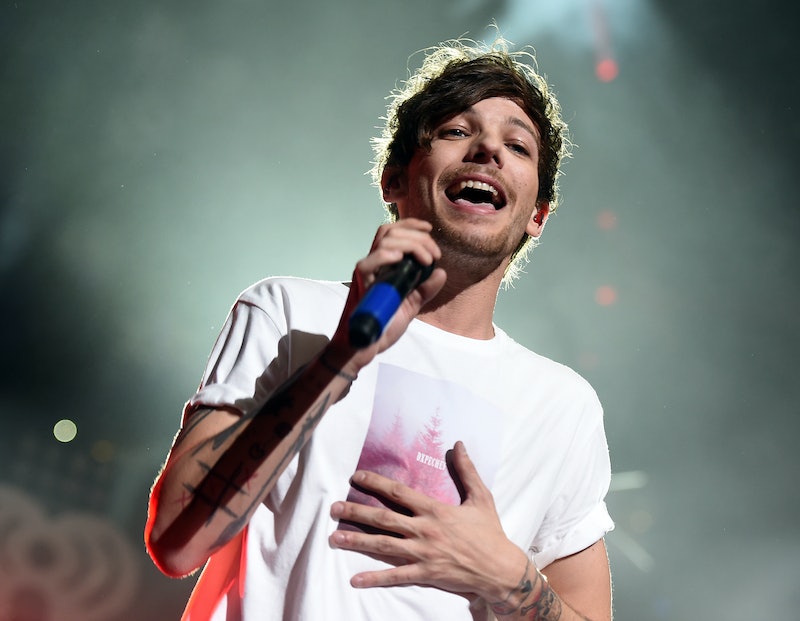 To say it's been an eventful weekend for One Direction fans would be an understatement. In the past 72 hours, Zayn Malik announced his first solo single, while Louis Tomlinson officially became a dad. There's plenty to celebrate here, especially when it comes to Tomlinson. The 24-year-old confirmed that Briana Jungwirth gave birth to their baby boy on Friday by sharing the good news on Twitter. This leaves one question: What's did Tomlinson name his baby? Luckily, The Sun may have found out the answer. (Update: Days after his son's birth, Tomlinson revealed his son's name will be Freddie.)

Louis and Briana are yet to file a birth certificate but they've agreed on the name Sydney Rain. It will be rubber-stamped in the next five days. It's not yet known whether the baby boy will take Briana's surname or Tomlinson.

Interesting, huh? Personally, I was rooting for him to name the kid NiaLiam ZaRry Tomlinson as a tribute to his bandmates, but I guess this name works too. If the rumors are true, I can't help but wonder, why Sydney Rain? Sure, it's a sweet choice, but there's got to be some meaning behind it.

Although the new parents has yet to confirm anything, let's assess what this possible baby name may mean for Tomlinson and Jungwirth.

1. According to babynamewizard.com, the name Sydney is "indicative of one who dwelled on or near the wide, riverside meadow, or from the wide island." Perhaps he's a fan of meadow and bodies of water. An appreciation of geography can go a long way.

2. Another possibility is that he chose the name based on the dynamic character from Charles Dickens' classic A Tale Of Two Cities . While this explanation seems like a long shot, you honestly never know. People name their kids after literary figures all the time.

3. My final guess is that it's a tribute to the city of Sydney in Australia. One Direction has toured Sydney plenty of times. Plus, it brings to mind a certain scene from Disney's Finding Nemo . You know, the one where Dory tries to memorize the address "42 Wallaby Way, Sydney"? I'd guess Tomlinson is a Nemo fan before a Dickens fan any day, although either is plausible.

2. The most straightforward explanation: Maybe it was raining the day that Tomlinson's son was born and they wanted to remember the weather forever. That's one way to never forget.

3. If considering etymology, babyname.com says the name Rain means "abundant blessings from above." Other sites go for a more literal interpretation and say it just means "rain," as in those water droplets that fall from the sky.

Considering this name has yet to be confirmed by Tomlinson himself, I think fans will have to wait and see about the meaning too. My favorite explanation from above would be that the "Best Song Ever" singer has loved the city of Sydney ever since Finding Nemo, and he realized this while looking out the window, admiring some rainy weather.