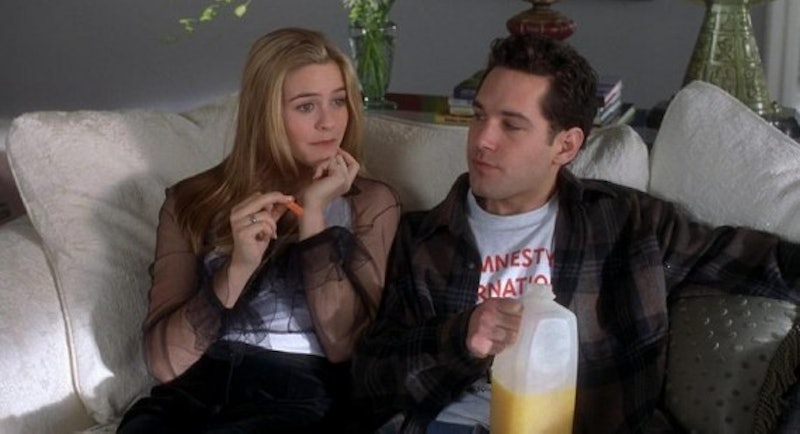 Valentine's Day is almost upon us, and although some may think the holiday is best spent out a romantic restaurant or under a canopy of stars (or hiding in a dark corner somewhere), there's actually no better place to spend it than on your couch in front of your TV. Thankfully, Netflix has loads of movies that perfectly capture the spirit of the season. So what should you stream on Netflix for Valentine's Day? It depends on how you view the holiday, since everyone treats V-Day differently. If you're looking for a feel good story of love, there are plenty of those. Or if you're trying to get over a break up, Netflix can help you out there, too.

There are cheesy rom-coms, adaptations of literature that stand the test of time, classic romance films from Hollywood's Golden Age, and of course, at least one Nicholas Sparks movie. Some of these movies are Oscar winners and others likely forced critics to gouge out their own eyes. Like I said, it depends on you and what you're in the mood for this Valentine's Day. So whether you want to relive young love, laugh at the ridiculousness of relationships, or just watch a really dirty movie, Netflix has you covered this February 14. Here are 31 movies to stream on Valentine's Day.

New York can be a pretty romantic place, and this film tries to capture that by telling countless romantic stories set in the city. It stars literally everyone who's ever been in a movie before.

Sometimes dreams do come true and your life turns into a fairytale. At least if you're J. Lo, anyway.

I know this movie is named after another holiday, or just a day, really, but if you're looking for a cheesy romantic comedy, this is straight up parmesan.

One could argue that it's not really Valentine's Day until you've seen both Julia Stiles and Freddie Prinze Jr. fall in love. This movie allows you to accomplish both of those feats at once.

5. The Prince and Me

Wow, Julia Stiles really was the Queen of Early 2000s rom-coms. Here she meets her royal match in an undercover Danish Prince. You know how that happens sometimes?

This movie, which also paints New York as the world's most romantic place, might just have you believing that two people could be destined to be together.

When it rains it pours, amirite? Who will Renée Zellweger choose? Hugh Grant? Colin Firth? Tough call, and her indecisiveness earned her an Oscar nomination.

Bridget Jones was actually based in part on this story by Jane Austen, known as one of the world's most famous novels. This 2005 version starring Keira Knightley is the most recent film adaptation — at least until Pride and Prejudice and Zombies premieres later this year.

Ah, to be young and in love. And quirky, delightfully quirky.

Had enough of relationships with the living? Why not try a deceased person? You'll never look at pottery the same way again.

Every year it seems Jennifer Lawrence and Bradley Cooper are in a movie together. Actually, that's literally been the case every year since 2012. To understand why the two stars have such great chemistry together, you really need to watch this, their first on screen pairing.

13. Seeking a Friend For the End of the World

Steve Carell and Keira Knightley might seem like an odd couple on paper, but they work surprisingly well together here. Plus, there's not a whole lot of time to find "the one" when the world is ending.

If young Johnny Depp doesn't put in a romantic mood, then what will?

This movie is based on a Nicholas Sparks novel, so you know what to expect. Better stock up on tissues.

How did William Shakespeare become the most influential writer of all time? He fell in love with Gwyneth Paltrow! Everyone knows that.

Is anything more romantic than meeting on the same day every twenty years with the person you know you're meant to be with? Nope. No there's not.

Sometimes in life, when nothing is going your way, one person can turn things around for you. That's the philosophy this movie puts forth, and it's not the worst one I've heard.

20. An Affair to Remember

Maybe the template for all romantic films to follow; just try not to tear up at the end.

Elaine Benes hated it, but you might not. It did after all win the Oscar for Best Picture in 1996.

Now for something a little less heavy, how about a paint-by-numbers romance starring Rachel Bilson about realizing your childhood sweetheart is the one you're meant to be with? Yep, this works.

Uh oh, male and female friends become roommates. He's a cad, she's coming off a bad break up. Think they'll fall in love? Who knows, maybe this 2001 film will surprise you (jk, it's exactly what you think it is).

25. How to Marry a Millionaire

The title and subject matter of this 1953 film about three beautiful women trying to snag a rich husband definitely seem dated and borderline offensive today, but the fact that it was the women (Marilyn Monroe, Betty Grable, and Lauren Bacall) who received top billing and were the stars of the film at a time when Hollywood was all about the men makes it worth watching.

26. Three Coins in the Fountain

Romance isn't the only thing that matters, as Elle Woods discovers after enrolling in law school in an attempt to win back her boyfriend and instead falling in love with law.

Witty writing by the Coen Brothers and the chemistry between stars George Clooney and Catherine Zeta-Jones elevate this rom-com above the standard fare.

Audrey Hepburn plays an undercover princess who falls for journalist Gregory Peck in Rome in this 1953 Oscar-winner. Kind of like Aladdin if the magic carpet were replaced with a Vespa.

Maybe on Valentine's Day you just want to watch a dirty movie about sex. Not judging, here's two!

There you go, plenty of romance and whatnot to get you through the holiday. In fact, with movies like these, you might not even want Valentine's Day to end! Just kidding, bring on St. Patrick's Day.