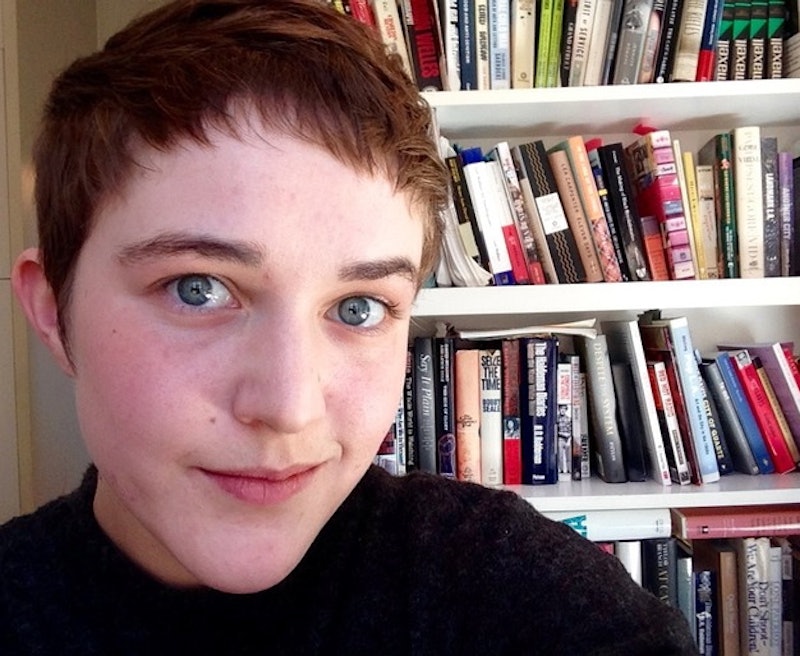 A few months ago, my eating disorder turned 10. I didn’t throw her a party. Depending on how I measure her beginning — whether by when she started or when she was named — her birth date falls in either in July or December of 2005. I was 16, a junior at Mira Loma High School in Sacramento, California, and I was consumed with the effort to be everything at once.

When I visited my parents over the holidays, I spent several hours sitting cross-legged on the carpet of my old bedroom, pawing through a box of papers from my high school years. I found notebooks from anthropology class, disposable camera prints (including what must have been my first selfies), and a binder full of meticulously curated drama club research collages. I was most excited to rediscover a small stack of neon computer paper printed in 10 point Skia font. These were my newspapers. The Flying Feather Duster, my obsessive teenage passion project.

The five issues in the box were a tiny percentage of the total Dusters, which I published weekly from the second month of my freshman year through the week I graduated. I solicited cartoons, goofy horoscopes, and fractured fairytales from my friends and wrote the rest myself. When the circulation — about 200 copies at its peak — got too big for my home printer, I made a weekly Thursday night pilgrimage to Kinko's so I could hand The Duster out at school on Friday. I never skipped a week. Not the week my grandma died, not the week an asthma attack sent me to the emergency room, and certainly not during the many weeks in which my mother coaxed and begged me to a battery of appointments for my eating disorder recovery.

I often wonder about all I could get done now, as an adult, if I had the energy and focus I did as a teenager. I woke up at 5 a.m., worked on homework for an hour, then headed to school for track practice before class. After school, depending on the season, there was soccer or theater rehearsals or a research project for my environmental systems class that involved wading around in an urban creek counting starlings and red-tailed hawks. Then I went home for more homework, dinner, and newspaper time. Sleep. Repeat. I don’t remember being particularly tired. The intensity of my schedule did not seem novel to me. Most of my friends had similar ones. We lived to excel.

The summer before my junior year, I became obsessed with eating healthy. I tried to cut out all processed sugars and adopted a minimalist diet of spinach, apples, black beans, and brown rice. It’s hard to say where exactly the obsession began. Something about perfection. Something about purity. Something about clinging to the androgynous, pre-pubescent body that was subtly beginning to soften and fill out. I would not have called my new habits dieting. Diets were for shallow people, for conformists. I had a “Well-Behaved Women Seldom Make History” button pinned to my backpack, for goodness sake. While I never would have admitted that I wanted to lose weight, by the end of the summer, my jeans fit a little looser. It felt good.

When school started again, my mom banned my new diet. She said it was a hassle for me not to eat what she or my dad was cooking for the family, but I suspect she also recognized the beginning of a bad pattern. I continued in secret. I scaled back my breakfast to a cup of black coffee and a packet of sugar-free instant oatmeal. I stopped bringing lunch to school and instead fed quarters to the soda machine to fill my stomach with the deceptive, fizzy presence of Diet Coke. Sometimes, when I was too ravenous after school to concentrate on my homework, I ate fistfuls of granola straight from the box. After I ate the granola, I would run. Soon I was running faster and farther than ever before. I felt good about myself, even if that goodness frayed easily.

Once, when I was working late into the night on my newspaper, my mother brought me a cup of milky chai. It tasted different than usual. When I asked how she had made it, she shrugged and said she had used half and half instead of 1% milk. I was furious. We almost never raise our voices in my family, but I remember saying angrily, “I don’t like it this way!” I felt she had tricked me into consuming more calories. Still, I told myself I was not trying to lose weight. I was merely trying to avoid gaining it. I was maintaining control of my body.

But lose weight I did. In December, my mother corralled me into a check-up with my pediatrician. I wore my favorite green sneakers that day, and a new pair of stripy bellbottoms from the thrift store. They were size zero, size nothing-at-all. A nurse weighed me, took my blood pressure, jotted notes in my file. The doctor asked careful questions about diet and exercise. In response, I stammered out a few vague lies. It felt like a set-up. I do not think he said the actual words to me at that first appointment — eating disorder, excessive exercise, anorexia, orthorexia — but I remember knowing that I had been found out. If I lost any more weight, he said, I would be hospitalized.

For many years, whenever I talked about my eating disorder, which wasn’t often, I used the past tense ... Until recently, I refused to confront the ways in which my eating disorder has remained present in my life.

If I had felt strong and in control as I descended into my eating disorder, recovery ripped that control away. I was barred from running. My doctor told me my heart could stop. My parents stocked the fridge with the soy pudding cups I loved and framed my recovery as a series of new goals. If I gained weight every week in January, I could visit my cousin in Seattle by myself and look at colleges. When I reached 100 pounds I could go back to soccer practice. I gained weight in the most gentle environment possible, but I was still full of rage and despair. The feeling of fullness disgusted me. I snuck frantic push-up sessions in my bedroom and drank liter bottles of water before counseling appointments when I feared I would miss my weigh-in goal.

In my darkest moment, I considered leaving in the morning as if driving to school and instead going all the way to San Francisco. I imagined parking the car in the lot on the Marin side of the Golden Gate and walking out to the center of the span. I rarely imagined what I would do next.

Now, as I look back at my old newspapers, I’m struck by how little they betray. Puns are prevalent. The headlines announce wacky crime scenarios involving animals — “Mutant guinea pig arrested for DUI” and “Young goat gang trashes buffet; ‘Kids these days,’ says police chief.” It’s not surprising, really, that I never alluded to recovery in my newspaper. I had neither the emotional resources nor the vocabulary. The Flying Feather Duster was a defense mechanism of pure performance, a way to scream “everything is fine” from behind Groucho Marx glasses.

For many years, whenever I talked about my eating disorder, which wasn’t often, I used the past tense. “When I was a teenager, I had an eating disorder. I lost a lot of weight through a combination of caloric restriction and obsessive exercise. I was lucky that I recovered quickly and didn’t relapse.” Until recently, I refused to confront the ways in which my eating disorder has remained present in my life. Most of the time, I like my body. I like the things it can do, and the places it’s taken me. But there are flashes of that old panicky self-hate, the kind I felt constantly in recovery.

Even though I’ve never starved myself scary since that time 10 years ago, my eating disorder, she’s still here. I recently heard a kickass interview with Margaret Cho in which she describes her eating disorder as a terminal disease, something that waxes and wanes but can always roar back when summoned by stress or a toxic phrase like “thigh gap.” And it’s true, when I have a particularly stressful week at work, I sometimes reach for restriction. I skip lunch and go for a longer run. But the thing about the kind of disordered behaviors that consumed me as a teenager is that they’re really effing difficult. In many ways, I’m lucky I don’t have that kind of focus and self-discipline anymore.

If my 16-year-old self were to meet me now, I wonder what she’d think. She’d probably be excited about the places I’ve traveled and that I live in New York City now. I bet she’d like my friends and the way I dress. But she’d be disappointed too. She’d wonder why I haven’t yet written a bestselling novel or won a jury prize at Sundance or run for city council. And yes, she’d wish I was skinnier.

If I were to meet my 16-year-old self, I’d tell her she’ll survive the thickening of her thighs. She’ll learn to let go a little. Ten years from now, she’ll still struggle sometimes with the feeling that she isn’t achieving enough. She won’t love her body all the time. But overall, her life will be richer, more interesting, more delicious than she’s imagined yet. Happy birthday, eating disorder. You’re still here, but I’m bigger and better and stronger than you.

Editor's note: If you’re struggling with your body image or an eating disorder, know that you’re not alone, and help is available.