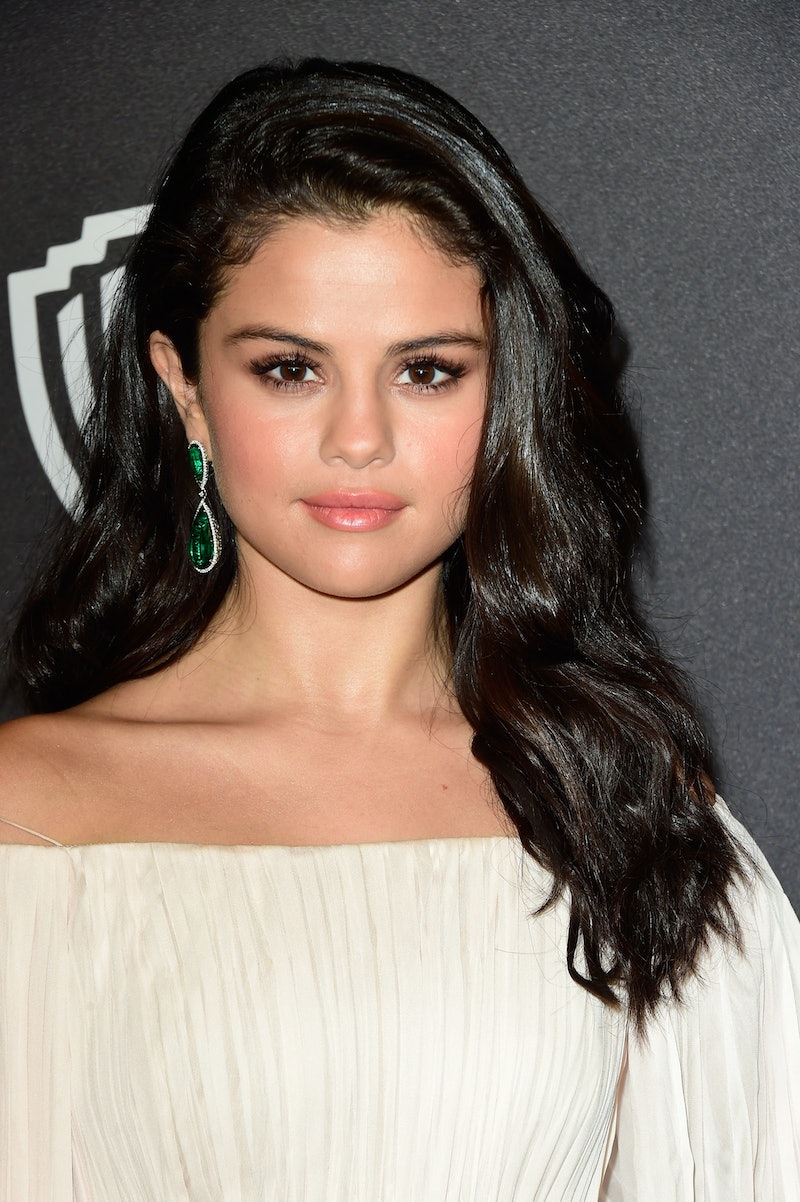 Given all the seemingly never-ending drama between Selena Gomez and Justin Bieber over the past few years, it's hard to remember a time when she dated anyone else. But let's take a trip back in time — the year was 2008 and Gomez's first celebrity boyfriend was Nick Jonas. Considering fellow Disney star Miley Cyrus previously dated Jonas from 2006-2007, everybody assumed these two ladies hated each other's guts. It may be more than seven years later, but Gomez is officially clearing the air. In W magazine's March issue, the "Hands To Myself" singer says,

We never feuded. We both liked the same guy when we were 16. It was just a Hilary Duff-Lindsay Lohan thing: "Oh, my God, we like the same boy!" We are now completely settled in our own lives.

It's great to hear that after all this time, there's no bad blood. Plus, I'm all about her love triangle analogy. To further prove how awesome it is, let's explore the similarities between Gomez, Cyrus, and Nick Jonas' situation and the Hilary Duff, Lindsay Lohan, and Aaron Carter debacle.

These guys actually have plenty in common, aside from their love triangle dilemmas. They both are known for having celebrity brothers. Remember Nick Carter from the Backstreet Boys? Obviously, no one can forget that famous family. Same can be said for the JoBros.

They've also both grown up in the spotlight, but continue making music today. Carter is actually still touring, meanwhile Jonas has been releasing songs with a way more mature sound. Sigh! It seems like just yesterday they were little pop stars, singing about "Aaron's Party" and "The Year 3000."

For the sake of analogy, Gomez is the Duff in this situation. Mostly because they've managed to transition from Disney princess to young-adult celebrity without attracting too much negative attention. Not to bash Lohan or Cyrus at all, but they've definitely participated in their fair share of scandalous behavior.

As far as a timeline on what happened, in 2000, Duff and Carter began dating and were off-and-on for a few years. Their relationship was seemingly too cute for words. (At least at the time! Since then, he seems to have struggled with getting over Duff and made a few cringeworthy comments.)

Meanwhile, Gomez and Jonas had a self-proclaimed "puppy love" in 2008, which lasted a few months. In September 2015, Gomez told a British radio station, "We were babies. But we actually caught up the other day and it's really fun to be able to do that."

Like I said before, there's no denying that Cyrus is the Lohan in this analogy — but that doesn't have to be a bad thing. They both grew up in the spotlight and didn't want to be known as the little girls from Disney forever. (I don't doubt that the other two wanted to avoid this lasting label, but they were less drastic about shedding it.)

Although Carter had been dating Duff, Lohan became involved in 2003. As Carter said on The Big Idea, "I started dating Hilary [Duff] on my 13th birthday. I was dating her for like a year and a half and then I just got a little bored so I went and I started getting to know Lindsay [Lohan], dating Lindsay." Yikes, that sounds quite complicated.

The contrast here is that Cyrus and Jonas actually did have a long-lasting relationship (from 2006 to 2007), and his time with Gomez didn't overlap. Sadly, he and Cyrus aren't close anymore. In 2015, Jonas told Elle , "I was so young. What's unfortunate is that, as we got older, we ran in different circles. We've always had respect and wished the best for each other."

OK, so these situations aren't exactly identical, but the analogy still stands. The main similarity here is that everybody pitted two young starlets against each other, simply for liking the same guy. That's totally unfair, right? At least all the drama is now ancient history.

More like this
Selena + Chef Season 4 Was Filmed At Hannah Montana's Old Malibu House
By Jake Viswanath
Selena Gomez Has Been Spotted Having Fun With A Top Film Producer
By El Hunt
Who Is Camila Cabello Dating? She's Getting Cozy With Lox Club CEO Austin Kevitch
By Radhika Menon
Leona Lewis & Husband Dennis Jauch Welcomed Their First Child
By Darshita Goyal
Get Even More From Bustle — Sign Up For The Newsletter