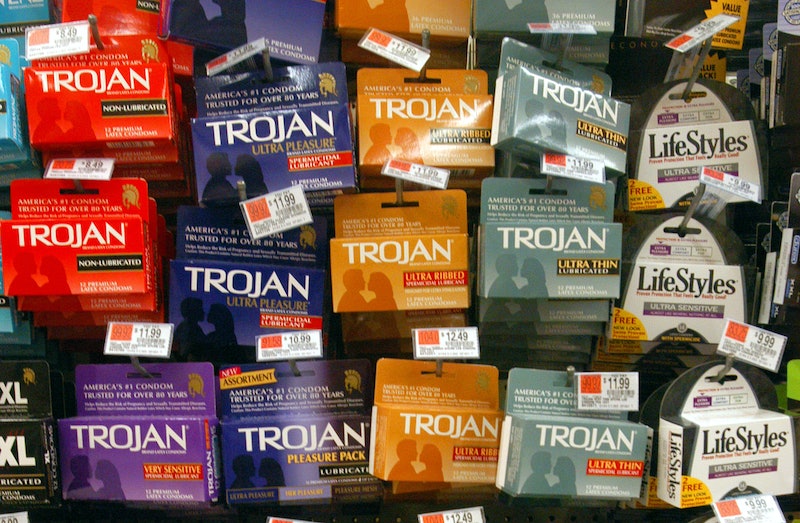 I think we can all agree that effective birth control is essentially one of the best things ever invented. Or, at the very least, an incredibly awesome medical marvel that we're very fortunate to have access to — however limited that access may sometimes be. I mean, can you imagine what it must have been like to have sex before the invention of hormonal birth control, IUDs, NuvaRings, Today Sponges, birth control patches, or condoms? I know I can't (though our grandmothers probably do). That said, no birth control method is 100 percent infallible, so it's important to be aware of the ways you could be making your contraceptives less effective.

1. You Don't Take Your Birth Control Pills At The Same Time Every Day

If you've been taking The Pill for very long at all, you probably already know this, but I'm going to stress it anyway — you absolutely need to be taking your birth control pills at roughly the same time every day. Because if all those hormones aren't evenly dispersed within your body, you could really mess things up.

Of course, this doesn't mean you should freak out and go buy a pregnancy test every time you forget to take your pill until lunchtime. But taking your birth control at different times every day will reduce its overall effectiveness, so try to keep the time you take your dosages as consistent as possible.

You've likely heard people say that taking antibiotics will decrease the effectiveness of your birth control pills. While this isn't true of every antibiotic, it is definitely true of the antibiotic Rifampin. So if your doc writes you scrip for Rifampin, let them know that you rely on the Pill for contraception, and know that you need to double up on contraception until you've finished with your antibiotics (your doctor will let you know when it's safe to go back to just using the Pill).

3. Your Condoms Are Super Old

Always, always double check that the condoms you're using aren't expired. Expiration dates are printed on each individual condom, and they're no joke — expired condoms are more likely to break, because the latex becomes less flexible over time. So before you get it on, take the time to make sure your condoms don't need replacing.

If your partner's penis is on the smaller side, then it's super important to make sure the condoms you two are using actually fit him. If the condom is too big, it can come off during sex (this has actually happened to me before, and it was terrifying), thus increasing the risk of unplanned pregnancy.

Even if your partner is more well-endowed, though, loss of erection can make condoms slip off during sex, too — so you may want to keep an eye on the state of your condom, no matter the size of your partner's penis. And just to be safe, you could keep a range of condom sizes in your nightstand and purse. It may seem over the top, but you won't regret being as prepared as possible. Particularly if condoms are your only form of contraception. Which leads us to...

5. You're Only Using One Contraceptive Method

Fortunately, condoms haven't failed me yet; but the fact is, relying strictly on one form of birth control is not ideal. If you want your birth control to be as effective as possible, use two forms of contraception instead of just one.

6. You're Not Storing Your Birth Control Correctly

Despite what pretty much every movie ever has lead us to believe, you should never store a condom in your wallet. There are multiple reasons for this: aside from the fact that you could keep it in there for too long and end up using it after its expiration date, you also could accidentally damage the condom by sitting on your wallet or simply creating too much friction when you open and close it. When you go out with intent to bang, make sure to put your condoms in their own little change purse or in one of your bag's zipper pockets.

Birth control pills are pretty hard to destroy, but you should know that keeping them stored at room temperature and away from moist, hot environments (like your bathroom during a shower or your car's glove compartment on a summer day) is ideal and makes them most effective.

If you use the NuvaRing, know that the website cautions to store it " at room temperature between 68°F to 77°F...for up to 4 months after you receive it." Storing the NuvaRing anywhere warmer — the website warns against storing it at temperatures over 86°F or in direct sunlight — will render it less effective, or possibly even useless.

7. You're Using The Wrong Kind Of Lube

I'm a big proponent of using lube during sex, but you should never use an oil-based lubricant with a condom. The oil in oil-based lubes can break down latex, and can cause condoms to deteriorate and even burst. Yikes! Make sure to check that any lube you're using is water-based.

8. You're Leaving Your Today Sponge or Diaphragm In For Too Long After Sex

I've never used the Today Sponge or a diaphragm, but if you use either, be sure you're not leaving them in too long after you've finished having sex. Like condoms, sponges and diaphragms are primarily a barrier between your partner's sperm and your egg (though they also include spermicide). Because of this, you can't count on them to provide you with long-term protection from unplanned pregnancy. Both devices must be left in place for six hours after sex, in order for the spermicide to work properly, but should not be left in much longer — diaphragms should be removed 6-12 hours after sex, and should never be left in for more than 30 hours; the sponge can be removed at any point after six hours have passed since sex, and should also not be left in for more than 30 hours.

9. You Never Check On Your IUD

Part of the appeal of the IUD is the idea that, after you've had it inserted, you can just forget about it — which sounds awesome, of course, but it's not entirely true. If you have an IUD, you should be periodically checking the string to make sure it's where it is supposed to be. If you don't, your IUD could end up becoming incorrectly positioned without you knowing it. So, take the time to feel around down there every once in a while. It may not be the most pleasant thing you do today, but it sure beats having to remember to take a pill every day, right?

If the birth control patch is your preferred method of contraception, know that you can't just stick it anywhere on your body; the Planned Parenthood website emphasizes that you should only "stick one new patch on the skin of your buttocks, stomach, upper outer arm, or back" — but never on your breasts. And know that you should never try to stick it on freshly-moisturized skin, or skin that is covered in makeup, oil, or powder, which can keep it from sticking properly.

Missing one birth control pill doesn't always result in unplanned pregnancy, if you take your missed pill as soon as possible. As Andrea Jackson, MD reported for Bedsider, "If you take the pill less than 24 hours after you were supposed to and it's not the first week of a new pack, you don't need a back-up method." However, Jackson goes on to report that, even with "perfect use," the Pill isn't 100 percent effective. So if you miss a pill, it's in your best interest to go ahead and double up on your contraception for a couple of days. Because when it comes to contraceptives, "better safe than sorry" really is your motto.