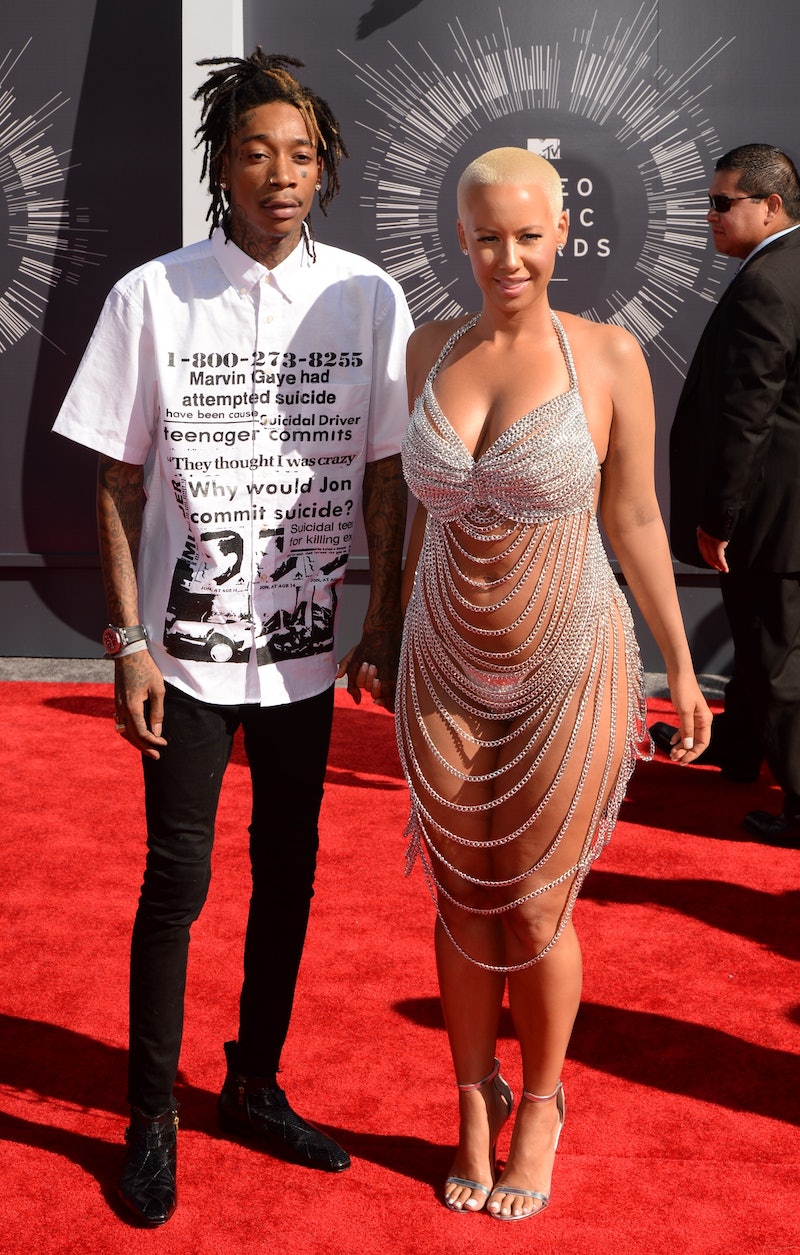 It's safe to say that it's been a crazier than normal week if, like me, you're obsessed with "keeping up" with all things Kardashian. Let's recap, shall we? First, there was the Twitter feud to end all Twitter feuds between Kim Kardashian's husband, Kanye West, and fellow rapper Wiz Khalifa. West and Wiz have a long history due to the fact that West was once in a very serious relationship with model Amber Rose, who later started dating Wiz. In 2013, Rose and Wiz had a son and got married in a matter of months, but divorced by the end of 2014. West had stated in the past that he had no issue with Wiz, but things all of a sudden blew up when the two found themselves embroiled in a Twitter feud. They've since (and very quickly) made up, and adding to that, it seems like with this new photo of Rose and ex-husband Wiz that things are fine between them, as well.

For some background on this confusing situation: West and Wiz's feud started when Wiz alluded to West's new album title, and West took the bait and went off on him and Rose in a series of hilarious, nonsensical, and offensive tweets. Adding fuel to the fire is the news that Kim's brother Rob has started dating Blac Chyna, who used to be a friend of Kim's and a fiancée of Tyga, who currently dates Kim's half-sister Kylie Jenner. Oh, and did I mention that Chyna is also friends with Rose? Are you dizzy yet?

Rose also got involved in the Twitter spat, attacking her ex, West, likely in retaliation to his comments about her past as a stripper. It's pretty crazy to think that a group of people, the vast majority of whom are parents, would get involved in such middle school drama, but alas, here we are. It seemed like this was going to be the celebrity feud of 2016, until... it suddenly wasn't.

If we fast forward a bit, it's clear to see that this 'feud' has been quickly put to rest. True, it seems like the "Blac Chyna vs. all Kardashians except Rob" situation still has some open wounds, but every other participant has quickly moved on. First, there was the Amber Rose-Kim Kardashian selfie that showed that the ladies were able to put up a united front despite what the fathers of their children had going on. Then, West called Wiz to personally apologize for the war of words on Twitter, showing that he does have some sense of self-awareness. Whew.

Finally, Wiz and his ex-wife showed us all grace and maturity is the way to go when she attended his album listening party Wednesday night, as evidenced by the jovial photo she posted on Instagram with the caption, "Supporting Sebastian's Dad at his #Khalifa Album Listening Party."

Truth be told, at first, it seemed like their divorce was not an amicable one, with Rose declaring that their marriage ended due to Wiz cheating on her. Wiz then denied the claim on Twitter. Then, to add insult to injury, Wiz sang some less-than-flattering lyrics about her in a verse on Juicy J's "For Everybody." Of course, divorce is never an easy thing to cope with, especially if infidelity is the reason behind the split, but last fall it seemed they were making amends, with Rose telling Hot 97 they were "learning to be friends."

She said, "I would never say anything negative. And he wouldn’t, either. And now we’re just really on a good page together. We’re learning how to be friends."

Thankfully, it seems official that these two were also able to put any bad blood behind them, effectively ending any feud between the popular rappers and their past-and-present flames Amber Rose and Kim Kardashian. So can we please move on from this and let bygones be bygones? I think the only way to go now is a duet between Wiz and Kanye, with a fire-hot video featuring Kim and Amber, of course. It would probably... break the Internet.