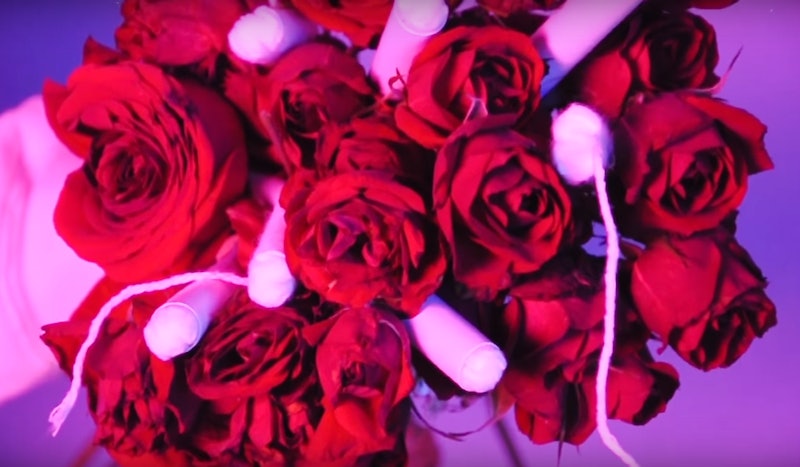 Lovers, forget champagne and diamonds; this Valentine’s Day, give the special lady in your life what she really wants: Menstrual supplies. Because if this holiday is all about luxury, then tampons are the ultimate Valentine’s Day gift. Or at least they’re taxed like they are.

You might think of tampons and pads as basic hygiene necessities, but, as this hilarious video from & Friends points out, if the tax codes of 40 states are anything to go by, then your monthly menstrual products are, in fact, an indulgent extravagance — so why not treat them as such? As the video’s narrator breathily instructs, “This Valentine’s Day, give in to her deepest desires. Give her absorbent cotton and disposable cardboard.” Sexay.

“We were inspired to make the video because we're always joking about how much it costs to ‘be a woman,’” Mary Dauterman and Sarah Lloyd of & Friends told Bustle. “We had just started reading about the ‘pink tax’ and the tampon tax and wanted to do our part to raise awareness.” If you’re a woman who buys stuff, you’re probably already well acquainted with the “pink tax,” the common practice of charging women more for goods and services than men, even when those goods and services are similar or identical. In 2015, a study by the New York City Department of Consumer Affairs found that, on average, women pay seven percent more than men do for similar products, which can add up to thousands of dollars over the course of a woman’s lifetime.

The tampon tax, in contrast, is a tax levied against goods sold solely to those of us who happen to have uteri. Forty states tax tampons and other menstrual supplies as “nonessential” or “luxury” items (Five states exempt menstrual supplies from sales tax, and five don’t have a sales tax at all). American women aren’t alone: Australia, the U.K., and a number of other countries tax menstrual supplies, too. Over the summer, Canada lifted its tampon tax, and France followed suit in December.

To be clear, the U.S. states that tax tampons don’t have special taxes levied only against feminine hygiene products. They tax many goods with sales taxes, but they have tax codes that allow exemptions for items that are necessities. However, period supplies aren’t exempt because they aren't considered “necessities,” which will make no sense whatsoever to anyone who has ever actually had a period. Unless the states that tax tampons are actually subtly trying to instigate a nationwide free-bleeding movement, women will continue to have to buy hygiene products every month from now until the end of time (or at least until we live in a future when corporeal existence has given way to virtual reality. At that point, we’ll menstruate via emoji). And the extra cost of those sales taxes add up — especially for women who are already struggling to make ends meet (and who, let’s not forget, are already paying more for goods and services than men because of the “pink tax”).

Mary and Sarah of & Friends told Bustle that they decided to make their video after hearing guys complain about finding “the perfect gift” for women on Valentine’s Day. “We have the perfect solution: any way a dude can help out with the burden of being a woman is the most ideal, romantic gift he could give,” they said. And while the idea of presenting a box of tampons to a woman as a romantic token might seem ridiculous, Mary and Sarah are “really hoping people actually do it!” And why not? That sh*t’s expensive.

So sexy! So versatile!

More like this
Why You're Seeing Green Bandanas At Abortion Rights Protests
By Lexi Inks
Playing In Wimbledon Whites While On Your Period “Isn’t Easy," Says Alicia Barnett
By Rachel Mantock
How Getting An Abortion Has Changed From The ’60s Through Today
By Amanda Chatel
The Most Powerful Photos From The Weekend’s Abortion Rights Protests
By Melanie Mignucci
Get Even More From Bustle — Sign Up For The Newsletter