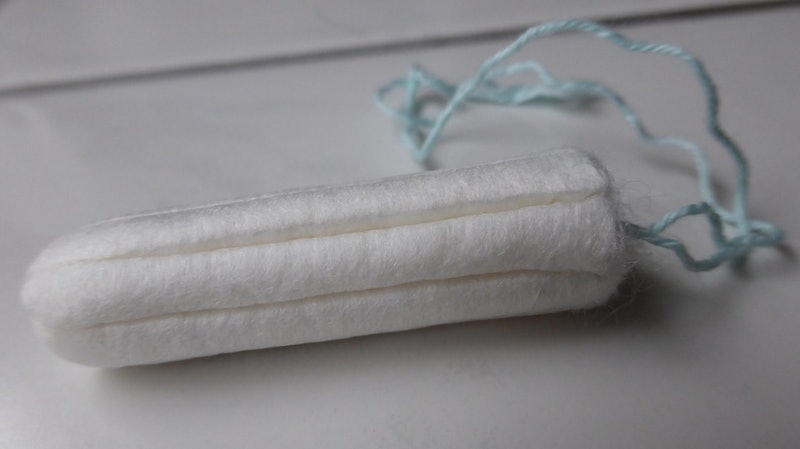 You would think the fact that tampons and other menstrual supplies are in fact necessities would be self-evident, but alas government tax policies often don't treat them as such. However, in France they have at last cut the tampon tax. Just a few months after blocking the proposal, the French National Assembly has approved a measure to cut the VAT, or sales tax, on tampons from 20 percent to 5.5 percent. Finally!

The proposal to reduce taxes on menstrual supplies, which originally came from from feminist group Georgette Sand, was first shot down in October when the government said they couldn't afford to pay for it. According to estimates, lowering the tax would cost the government the equivalent of about $60 million in 2016, which is quite a bit of money to lose from a budget. Of course, it's also quite a bit of money for French women to have to pay in order to obtain necessary items. It's annoying enough to have to deal with periods at all, not to mention expensive enough to just have to purchase the supplies to begin with. Adding on a 20 percent sales tax on top of that is just adding insult to injury.

But fortunately, the French government has reversed their position. Saying that they've now found the money, the National Assembly voted on Friday to decrease the tax. The Prime Minister called it "a step in the right direction," and the Finance Minister called it a policy change "in the interest of half of humanity." I personally call it fair.

France isn't the only country where women have fought to change the tax policy for tampons and other period supplies. After pressure from Canadian women, Canada dropped all sales tax on tampons in July, since Canada's sales tax policy says essential items shouldn't be taxed. And women in other countries have been trying to win similar victories.

There have been Twitter hashtags and parody videos. Women in Australia have tried dressing as feminine hygiene products. Women in the U.K. even decided to try free-bleeding outside of Parliament. Which honestly also seems fair — after all, if your tax policies imply that tampons aren't a necessity, isn't that basically an implicit endorsement of free-bleeding as valid period-management option?

More like this
25 Quotes About Love To Share During Pride Month 2022
By Madeleine Aggeler and Emma Garza
How To See The Lunar Eclipse On May 15-16, 2022
By Kaitlyn Wylde
Twitter Was Saying The Same Thing About Sam Ryder’s Surprising Eurovision Result
By El Hunt
Photos Of Boris Johnson Drinking At A Downing Street Lockdown Party Have Surfaced
By Bustle UK
Get Even More From Bustle — Sign Up For The Newsletter