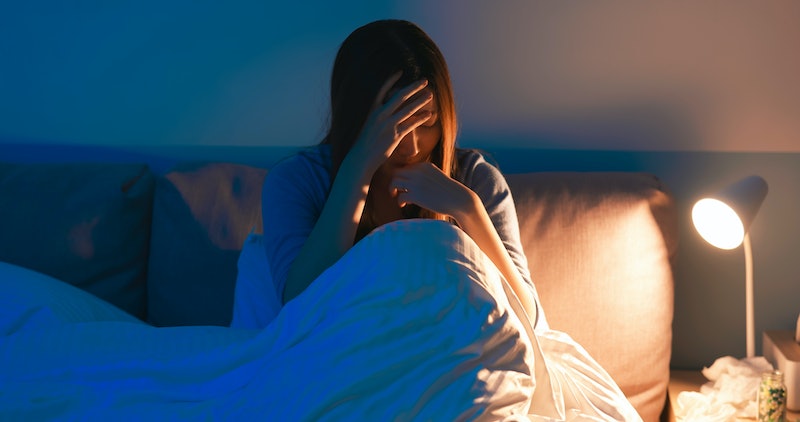 It saddens me that, even in 2016, some people think that their thoughts on what qualifies as rape are more important than the actual experiences of real women who have been assaulted. But two days ago, after Bustle published a heartfelt personal essay by Laura Gianino, "I Didn't Say No — But It Was Still Rape," the trolls came out in full force to do just that. In the essay, Gianino recounts a past sexual experience which began as consensual, but turned into what she personally felt was rape. Though she didn't say the words, "stop," "don't," or "no" to the man she was having sex with, she did express to him that he was hurting her, and when he asked her if she wanted to stop, she replied "kind of" while grimacing in pain. However, instead of stopping when she expressed her discomfort, he continued having sex with her until he had finished.

Though the essay has received a lot of support, a few readers have hatefully commented via Facebook that this didn't qualify as rape because Gianino didn't verbally withdraw her consent or physically push away her partner. They've even gone so far as to express concern for the man (whom Gianino never names) while showing outright hostility toward her.

But unless a person gives clear, express consent to sexual activity, they are not a consenting sexual partner. And while this is only a legal standard in certain places that have adopted affirmative consent laws, such as some college and university campuses, it should be a standard of human decency in all sexual situations. Furthermore, the absence of "no," or even a partner's total silence, does not constitute consent. If a man or a woman shows disinterest in, or discomfort with, finishing a sexual activity, but their partner ignores their uneasiness so they can finish, that qualifies as rape, regardless of what some asshole on the Internet thinks.

This isn't just an issue with trolls, however. Many people who are not trying to be malicious sometimes think they know what constitutes rape better than the people who have experienced it, simply because we get so many cultural messages about what constitutes sexual assault (most of which have little to do with how sexual assault actually plays out in real life). Many people also mistakenly believe that legal definitions of sexual assault should be the only standard by which we judge personal experiences. But just because your experience does not necessarily align with some legally actionable definition of sexual assault does not mean that you do not have the right to define your experience that way, and want support.

Quite simply, we don't have the right to tell anyone that their experience of rape doesn't "count." Sexual assault and rape are nowhere near as cut and dried as most of us were raised to believe. Just because it has never occurred to us that a certain act may qualify as rape doesn't mean that someone can't experience it that way. In hopes of furthering this understanding, here are seven things you might not think are rape that can be.

1. If You Ask Your Partner To Switch Positions And They Refuse

A while back, I asked a man I was having sex with if we could switch positions. We were in a position I normally liked, but on this day, it was just too painful. I told him the position we were in was causing me pain, but when I asked if we could switch, he said "no" and kept having sex with me in that position. I waited a few minutes to see if it would become less painful. When it didn't, I asked him again if we could switch. Again he said no. Defeated, I allowed him to pin my arms behind my back. I cried, because it hurt and I wasn't OK with what was happening. But he kept going until he'd finished. Afterwards, I knew that what had happened wasn't OK, but I didn't realize that I had technically experienced non-consensual sex until months later.

To some, this may not seem like rape at all, because I had initially consented to sex with this person. Additionally, I would never compare what I experienced to a violent rape. Technically, though, what I experienced was rape, because my sexual partner continued in an activity after I'd expressly asked him not to. If this has ever happened to you, know that it's never OK for someone to do something to your body after you've asked them not to — no matter what form that request takes. There are literally hundreds of ways to have sex. If one of those ways hurts you, you should never be forced to continue with it until your partner's finished with you. Which brings us to ...

2. If You Tell Your Partner They're Hurting You, But They Ignore You And Keep Going

If you tell your sexual partner that they're hurting you, but they pretend they can't hear you or flat-out ignore you so they can finish, that's rape. Even if you're afraid to speak up, but it's clear that you're in pain during sex, your partner should be respectful enough to ask you if you're OK. Once you've expressed discomfort and disinterest in continuing, then it's time to stop, and your partner should comply with that. You shouldn't have to ask twice — and if they don't respect that request, that can be rape.

This has happened to me as well. On more than one occasion, a sexual partner held my head in a locked position while I was going down on him. Even when I was literally choking on him and repeatedly smacking his thigh to try to get him to loosen his grip, he still wouldn't immediately let me go. At the time, I thought that since I actually really enjoy deepthroating (at my own friggin' pace, thank you) that this didn't qualify as rape. But again, this is technically a case in which I withdrew my consent and was not only ignored, but actually overpowered into doing something I didn't want to do.

4. If Your Partner Keeps Asking For Sex After You Refuse, Until You Finally Say Yes

Saying "no" multiple times and then saying "yes" once doesn't equal real, obtained consent. This is called coerced consent, and it's technically rape. I'm not saying that people never change their mind about not wanting to have sex, but it should be a decision they make free of pressure and coercion. People respond to coercion for all sorts of reasons, from fear of violence to concern about emotional repercussions, and those are just the tip of the iceberg. "No" is supposed to mean "no." Not "maybe I'll change my mind if you keep asking." And coerced consent isn't really consent at all.

5. If Your Partner Continues Having Sex With You After You've Changed Your Mind About Having Sex

This is very simple. Consent is something you give, so it's also something you can take away. If you've consented to having sex with someone, and then you change your mind in the middle of the act, your partner legally has to respect that you've withdrawn your consent. If they try to tell you that you can't say "no" because you've already said "yes," then they are trying to force themselves on you, and that is rape. You can withdraw your consent to sexual activity at literally any time. Don't let anyone try to tell you differently.

6. If Someone Tries To Have Sex With You When You're Incapable Of Giving Consent

When I was in college, a friend of mine told me that his friend's girlfriend was raped at a party. She was drunk while the assault occurred, so some of the people who heard about what had happened blamed her for it, saying that it was "kind of her fault." But if someone tries to have sex with you when you're too drunk, high, or unconscious to agree to it, then it's not your fault. It's rape. Not being capable of saying "no" is not the same thing as saying "yes." Period.

7. If Your Partner Tries To Engage In A Specific Sexual Act After You've Asked Them Not To

Obviously, there is a difference between the non-consensual sexual experiences I've had and the violent sexual assaults that so many women survive on a daily basis. But just because some people experience what we are traditionally taught to recognize as rape doesn't mean that other experiences that don't look the same are not also rape. Any sexual activity in which one party doesn't give their full consent to begin with, wishes to withdraw their consent after giving it, or is incapable of giving consent in the first place, is rape.

And until we as a society can grasp this simple concept, rape culture and victim blaming will continue to be the norm. Instead of teaching affirmative consent, we will continue attacking the women who speak up about their experiences with non-consensual sex. Silencing women who speak up about rape discourages women from speaking up during sex in the first place, and then punishes them for not finding the courage to say "no."

So stop defining women's sexual experiences for them just because they don't sound like rape to you. Take the time to learn about affirmative consent instead. Please and thank you.