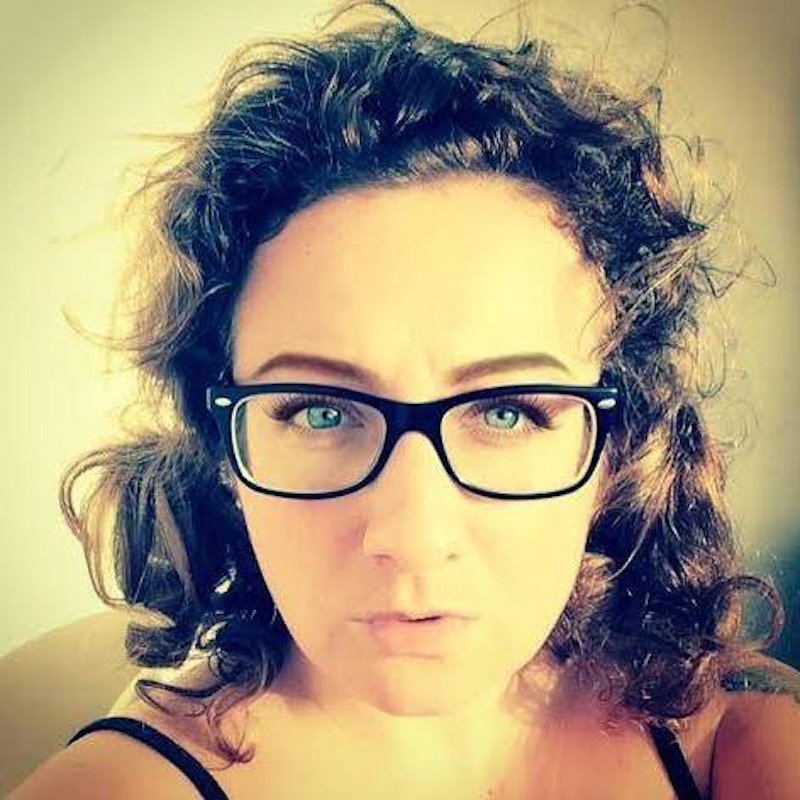 I had just turned 18 years old when I lost my virginity. I lost it to my high school boyfriend, John, whole I’d been dating for eight months at the time. He was also my first boyfriend and, at least my teenage standards, my first love. Looking back now, I’m pretty sure it wasn’t love. Or rather not the love that one feels as they get older and experience more of the world and relationships.

I had no major desire to have sex with John... but I did want to do it. It wasn’t anything against him, it’s just that the desire wasn’t really there for me yet. I just thought it was something that one did when they were in a relationship for a certain amount of time. Also, all my friends had already lost their virginity and raved about how great sex was (although I wonder how many can look back and still say the same), so I assumed it was my turn. I also felt like I needed to get it out of the way ― there’s only so many times you can get fingered or give hand jobs without getting obscenely bored. I was so bored.

So we started inching our way toward having sex ― we were both virgins. Here’s what it was like.

1. It Took A Lot Of Planning

When I say planning, I don’t mean lighting candles and setting a mood, but trying to figure out where the hell we were going to do it. Although John had gone off to college, his first year at Keene State College, I was still at my parents’ house for one more year. Being under mom and dad’s roof meant there was no effing way they were going to let me go visit John for a weekend.

However, after lots of finagling, lying to my parents about how I was staying with a friend for the weekend because her parents were out of town, getting my sister’s boyfriend to drive me the two hours way out to Keene in a torrential downpour, and asking John’s stoner roommate to take his bong and bongo drums someplace else for a bit, it happened.

2. It Didn’t Really Hurt (Although I Expected It Would)

At 18, the concept of foreplay means kissing for all of 10 minutes, then the clothes come off. We both knew what we were going to do that night, so we didn’t waste any time. I now know that good sex requires at least some foreplay, if only to properly arouse a woman, but we went from kissing to actual intercourse in probably less than 10 minutes that night.

Although I have a pretty high pain tolerance, I did expect some pain. I mean, that’s what we’re told: There will be pain when you lose your virginity. But what I felt more than anything was pressure. The pressure didn’t feel good, it just felt awkward. I now know that had I been aroused enough to be wet or had we used lube ― a total foreign concept at that time ― it would have eased the pressure feeling a bit.

3. There Was A Tiny Bit Of Blood

Again, I expected there to be lots of blood. Like gushing blood, because I imagined that my hymen was a thick doorway that would be penetrated and broken, and upon the breaking, it would be like getting my period. Nope; not even close. There was a little blood, but I know now that was probably from the irritation of being so nervous that my vagina was a dry desert, and not because of a hymen situation. I also got my period the next day, so it could have been from that, too.

4. We Didn't Know How To Put On A Condom Because Of Lack Of Education

The sex ed in my high school left much to be desired. The girls and boys were separated, and then we were given a brief rundown about how condoms prevent pregnancy and STDs. We were also forced to watch a movie of a woman giving birth. That was it. How condoms were put on, the difference between latex and natural condoms wasn’t discussed, and the importance of getting STI screenings was totally ignored. Any and all hormonal birth control wasn’t even mentioned.

John struggled with the condom, because he'd never put one on and it's not like I knew how to help.

5. We Were Both Totally Clueless In How To Move

Sex requires being physically and emotionally in sync with your partner. While people probably all move a little bit differently, experience teaches you how to move with each person new partner you meet, so it works and feels good. In our case, we were two virgins humping at each other instead of moving with each other. It was sort of embarrassing, but I think a lot of people have an awkward first time.

6. He Definitely Enjoyed Himself; I Can’t Say The Same

It took John a while to have an orgasm. During that time I focused on the bed springs of the top bunk, kind of wishing it would be end soon. I imagine that if he hadn’t been so nervous, he would have come even faster. It was his first time; I’m not faulting him for it.

I, on the other hand, did not have an orgasm. In fact, after he climaxed, it was over. He didn’t try to make me orgasm, which I know was just lack of experience, and I didn’t ask him to, because again, lack of experience didn’t allow me to demand that it was my turn. And, honestly, having never experienced an orgasm at that point in my life, I wasn’t even sure what we were supposed to do to make that happen. I had zero understanding of how my body worked.

Yeah, it sucked. Again, this has nothing to do with John. NOTHING. It had everything to do with the fact that we were kids trying something for the very first time and not having even the slightest clue as to what to do. I mean, I had even been masturbating for months before that, pleading with my body to orgasm, but since I didn’t really know where my clitoris was, I never did. I thought orgasms happened from intercourse, and while I now know they can happen for women who can experience them thanks the G-spot, being a woman who needs clitoral stimulation ― something I wouldn’t discover for awhile ― my orgasm days were still a ways off.

8. Afterward I Looked At Him (And Myself) Differently

I didn’t look at him in a bad way or a better way, but a different way. We had been as physically close as two people could be, so he just looked different to me. I also felt like I looked different, too, like somehow people could tell I was no longer a virgin. I didn’t care if they could tell, but I wondered if all of a sudden I had a glow or walked differently or had a deeper understand of life ― I didn’t, of course, but since sex felt like such a big deal, at least when you first do it, I just assumed the difference was obvious.

9. It Took A Long Time For Me To Actually Like Sex

John and I would have sex several more times before I went off to college the following year and our relationship came to an end. Being three hours away and not having access to a car, it just didn’t work out. But during all those times, it got a little better, but not much. I never had an orgasm with him, but man, did I fake it like a pro, something I now regret.

At that age, communicating about sex isn’t exactly easy. In fact, it would take years for me to enjoy sex, and it wasn’t until my late 20s that I could finally say that I genuinely loved sex. It was when I was able to communicate to my partner what I wanted and how I liked it that my sex life got awesome. It just took me awhile to get to a comfortable place with my sexuality where I could verbally communicate things. I’m so happy I got there, because if I were still having the sex now that I had at 18 and 19 ― whoa Nelly ― that would be some disappointing stuff.